Home » Entertainment » Depending on the Kindness of Sound Engineers

Williamstown Theater Festival’s summer season is now a winter experiment, all on audio. That includes “A Streetcar Named Desire,” recorded in actor’s closets. 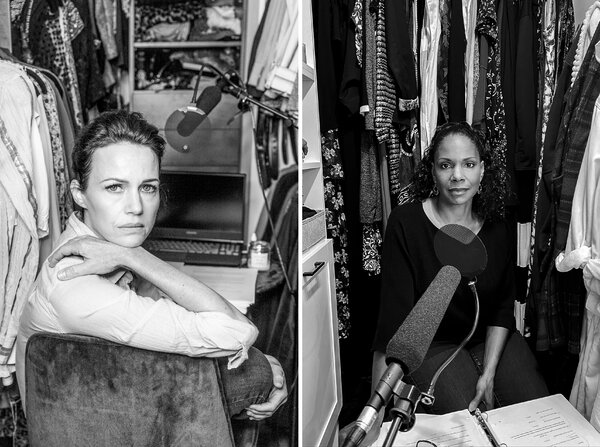 A little over a year ago, the director Robert O’Hara and Mandy Greenfield, the artistic director of the Williamstown Theater Festival, phoned Audra McDonald with a proposition. They wanted her to play Blanche DuBois in “A Streetcar Named Desire.” McDonald, a six-time Tony-winning actress, hesitated. The role frightened her. “It’s a recipe for disaster and failure,” she said.

And that was before she met her co-star: a lawn mower.

McDonald accepted the role, and had a pandemic not intervened, her “Streetcar” would have opened in June. But when Greenfield realized that this summer’s festival, a proving ground for new plays and a holiday camp for celebrity actors, could not go forward as scheduled, she reached out to Kate Navin, an artistic producer with Audible, the Amazon-owned audiobook powerhouse.

Together they dreamed up a grand plan, which they announced in early April: They would create an acoustic record of a summer that wasn’t, producing deluxe recordings of each show that the festival had announced for 2020 and releasing all of them on Audible.

Which explains, mostly, why McDonald spent two days in late August huddled inside a closet, recording Blanche’s anguish while a neighbor’s mower revved and a dog barked and her toddler daughter shrieked “No, I don’t want to!” just outside the door.

“It was a very wild way of trying to dive in and fall into one of the most iconic female roles in the history of theater,” McDonald said.

These aren’t exactly the shows that Williamstown first announced. The cast lists aren’t quite the same either. It turns out that cramming an entire summer season into a pair of headphones, easily the most ambitious project Audible’s theater wing has ever attempted, means flubbing a few lines on the way to opening night.

“The process,” Greenfield said, “has been exhilarating, exasperating and totally gratifying.” 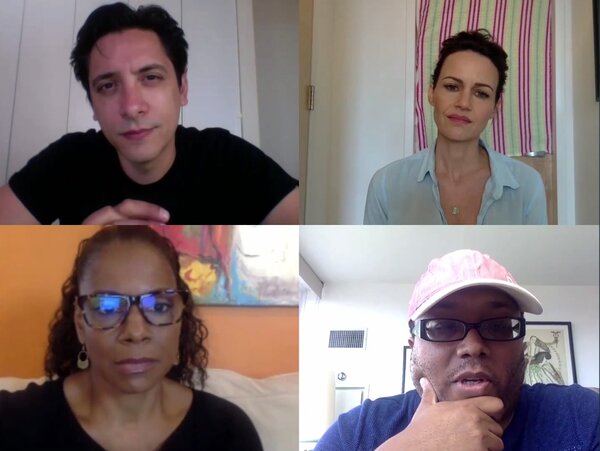 Greenfield cold called Navin back in March, when it became clear that Massachusetts, where the festival resides, would not permit in-person gathering. Navin didn’t pick up. So Greenfield left a message. “I have a crazy idea,” it began.

Actually, the idea wasn’t so crazy, especially as Audible had already had conversations about extending its resources to artists during the pandemic. After a few more calls, Audible agreed to finance, record and distribute the season, paying the actors at least what they would have earned at Williamstown.

The festival, which had to forego its entire season’s income, about $2 million, will not realize revenue from sales of the plays on Audible, though Greenfield hopes it might spur philanthropy.

With the project a go, Greenfield reached out to the artists, who quickly signed on. Nayfack, who also stars in her play, about a group of women all recovering from gender confirmation surgery in a hotel in Thailand, described the pivot to audio as a relief from “the murky purgatory” of quarantine.

“It was like, ‘Oh my gosh, I have a reason to get out of bed and start writing,’” she said. Further inspiration: An Audible performance can reach hundreds of thousands, while a festival performance seats only hundreds.

Navin and Greenfield set tentative recording targets for the summer, when they assumed that studios would have reopened to small groups. “That is how we have produced our theater titles to date,” Navin said during a phone call in May. “Multicast productions that we’ve done, we’ve put everybody in a room together so that they have their acting partners, so that the performance is really authentic.”

But the East Coast’s slow reopening, plus phase-in guidelines that didn’t distinguish between live performances with or without an audience meant delays, then a decisive shift. The project mostly gave up on studio sessions, instead sending actors personalized recording equipment: a computer, a microphone, headphones.

Even online, each show would still follow a truncated version of the Williamstown process, starting rehearsals with a virtual meet and greet, ending the run (which is to say, the recording sessions) with a computerized cast party. It would be up to Audible’s engineers to make it sound as though the actors occupied the same stage, squaring the acoustic difference between a bedroom and a bathroom, say.

The adjusted schedule meant that one show dropped out, Leslye Headland’s “Cult of Love,” replaced by Morisseau’s “Paradise Blue.” A few performers had to cancel as well, like Bobby Cannavale, cast as Stanley in “Streetcar.” Ariel Shafir, a theater and film actor, instead filled the role.

In spring, O’Hara, who directed “A Raisin in the Sun” at Williamstown in 2019, received the move to Audible with some disappointment. He and his designers had already begun to envision how the play, set in cosmopolitan, midcentury New Orleans, would look and feel.

“We were full speed ahead, and there were a lot of things in the works in terms of imagining it for the stage,” he said. Remote recording provided another disappointment, as it meant directing actors, like McDonald, whom he had never met face to face.

But by midsummer, a few weeks before recording, the possibilities had begun to excite him. “In audio I can instantly bring you into an intimate conversation, I can drag you right into the bathroom, right into the corner, right into a sexual moment,” he said. “I can actually present desire and the atmosphere right inside your ear and bring you close to it.” (“Streetcar” has been released on audio at least three times before, so there’s precedent.).

Carla Gugino, who plays Blanche’s sister, Stella, and also recorded from within a closet, had wondered how the cast would take what she called “one of the most physical, primal, tactile dramas that we have in the American theater canon,” and translate it to audio only. But during remote rehearsal, which O’Hara conducted with cameras off so that the actors wouldn’t have any more information than a typical listener, the cast discovered how to move closer to and away from the microphone to suggest distance and proximity.

Another discovery? Avoid pauses. “Silence doesn’t help you,” O’Hara said. “Most times it sounds like someone missed the line or there’s a been a mistake. Holding for dramatic silence doesn’t have any weight on the ear at all.”

The production’s sound designer, Lindsay Jones sourced and created expected sound cues — clinking ice, shuffled cards, that streetcar. But he also looked for effects that could convey greater intimacy, burrowing into Blanche’s unquiet mind. “We can go right into Blanche’s psyche on audio,” he said.

That said, when I listened to an hour or so of rehearsal in August, the conversation didn’t exactly center on the psyche, as Gugino wondered whether the microphone would pick up the rumbling of her stomach. It wouldn’t.

The recording sessions for “Streetcar” progressed a lot like traditional run-throughs, though run-throughs in which the actors appeared to each other as blacked out squares on a computer screen. “The play holds a lot of trauma,” O’Hara said. “So I made a very, very particular decision, before we even began that we would only do at most two takes.”

Playwrights and directors of the following pieces made other decisions and other adjustments, usually minor. Ziegler tweaked a few lines to explain unseen body language. “It’s fine,” one character now says, when a colleague accidentally brushes against him, “strangely my arm doesn’t fall off when something touches it.” Typically theater wisdom insists that you should show, not tell. Now telling was required.

Despite occasional hiccups — a storm that knocked out internet, apartments with thin walls, fire trucks — five of the shows had been recorded by the end of October and the sixth, “Row,” was preparing for a week in studio, though Covid regulations meant that no more than two singers could share a booth.

“It was sort of heartbreaking for me to realize that we wouldn’t be able to have all of the singers singing the material ever at the same time,” Dawn Landes, the composer of “Row” said of the recording sessions. Still, having even two singers together, without the microsecond delays that remote recording occasions, was something.

Each completed recording was sent to Audible’s engineers, who assembled a rough cut. Directors sent back suggestions. The cuts became less rough. Then sound designers took over. Jones, the “Streetcar” designer, added in the everyday noises of the apartment, crafting them down to the microsecond, then layered in jazz music he had composed online using virtual instruments. The audio had to stand in for the set, the costumes, the lights. “You’re trying to make a movie for your ears,” he said.

While Gugino called the recording, which she had heard in rough cut, “a beautifully distilled version of the play, stripped of any other distractions,” McDonald wasn’t sure what they had made. She had yet to feel Blanche in her body. “All I have right now are her words,” she said.

Yet relying only on language focused her performance, McDonald said. “You have no choice but to fully be in the moment.” She trusted that eventually she would perform Blanche live and visible. “But for now, this is what it is,” she said.

Since March 11, when Greenfield canceled the season, she has wondered if this — an all-audio season — was enough. That nearby theaters in the Berkshires received permission for some in-person performances have made the wondering more acute.

“Did I do the right thing?” she wrote in an email in late November. “Listen to Audra McDonald as Blanche DuBois, listen to Grace McLean sing ‘Row,’ listen to Kristolyn Lloyd in ‘Paradise Blue,’ and you can tell me.”

No live recording can replace the experience of live theater and these don’t try to. Greenfield would like to stage the 2020 plays at some point. “I want very much for their work to live,” she said. “We will have to see what’s possible ahead.” But she hopes that each recording provides “a meal in and of itself.” Beyond aesthetic satisfaction the audio-only season stands as placeholder and mile marker, an aural record of a fraught moment and a way to keep actors working, paid and in community, however remotely.

“We had the opportunity to come together and, and make a play, when no one else was getting to make a play,” Nayfack said. “That was a huge privilege.”