After renewing “GLOW” for a fourth and final season last year, Netflix walked back that decision last month by ending the series instead, citing production delays caused by the coronavirus.

I was immediately and immensely sad, not only that I no longer got to spend time with the scrappy women wrestlers at its center but also that their stories were never concluded. As a lifelong wrestling fan, culture writer and the editor of a forthcoming book about Jenji Kohan (one of the show’s executive producers and the creator of “Orange Is the New Black”), I was sorry to lose something that lay at the intersection of so many of my interests. Since its 2017 premiere, I loved how it gave the prestige TV treatment to a pro-wrestling subculture that is frequently dismissed, going all the way back to its carny roots.

I will miss the leotards and sequins. But the resurging pandemic means there’s more time than usual for me to revisit the Gorgeous Ladies of Wrestling. Here are three reasons I’ll be watching “GLOW” again.

Professional wrestling has been depicted a handful of times in pop culture, but apart from the Darren Aronofsky film “The Wrestler” (2008), seldom have those portrayals taken its artistry and athleticism seriously. Even less frequently, if ever, have they been centered on women.

“GLOW” changed that. Inspired by the real-life 1980s women’s wrestling show, “Gorgeous Ladies of Wrestling” — “G.L.O.W.” for short — the Netflix series followed the failed actress Ruth (Alison Brie) and her marginally more successful best friend, Debbie (Betty Gilpin), a former soap star. When Debbie finds out that Ruth has been sleeping with her husband, she confronts Ruth in a dilapidated ring during an audition for the show that will one day become “G.L.O.W.” The director, Sam Sylvia (Marc Maron), immediately sees dollar signs and invites them both to join with Debbie as “his star,” playing the All-American wrestler Liberty Belle. 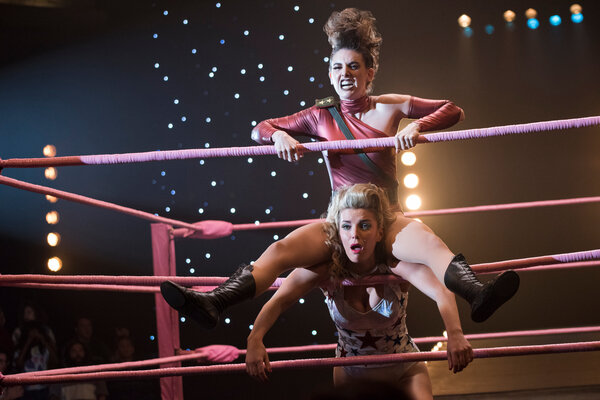 Throughout its three season run, the women of “GLOW” dealt with subjects that are faced by everyday women but are rarely depicted in professional wrestling, including motherhood, friendship, queer identity, ambition, reproductive rights, racism and eating disorders. Debbie’s reclamation of her body through wrestling, after childbirth and divorce, was a joy to watch. So was her unlikely bond with Tammé (Kia Stevens), a single Black mom putting her son through an Ivy League college while playing a character called Welfare Queen.

In one standout Season 3 episode, the wrestlers take a break from their Las Vegas residency to connect with nature on a weekend camping trip. Around the campfire, Melrose (Jackie Tohn) and Jenny (Ellen Wong) discuss what it means to be the children of immigrants in America while Yolanda (Shakira Berrera) and Arthie (Sunita Mani) navigate their romantic relationship among the group of otherwise straight women. It had a level of empathy for the real-life women behind the wrestler caricatures that rarely comes through in the wrestling productions themselves.

Still, the wrestling was central, and it provided a fun entry point for people who had perhaps never seen it as anything more than a bunch of half naked men fake punching each other.

When Debbie attends a wrestling show in Season 1, we experience her aha moment with her as she likens the theatrics in the ring to her experience in soap operas. Later in Season 1, during an extremely ’80s montage set to the Stan Bush song “Dare,” Debbie and Ruth must learn to trust each other in the ring as they practice their dangerous and athletically demanding moves until they get them right. Debbie fly-tackles Ruth off the ropes. Ruth slams Debbie’s face into the turnbuckle. Friends of mine who were never fans of wrestling have since come with me to wrestling shows, citing these scenes as their own eureka moments.

That’s it. That’s the entry.

Joking aside, even with such a strong ensemble cast, “GLOW” was ultimately a star vehicle for Gilpin, whose portrayal of a former soap actress turned wrestler turned promoter was exceptional. She had good company: Stevens, a real-life wrestler in both the WWE and AEW, was among my favorites; so were Mani, who seems to be everywhere right now, and the sorely underutilized Wong, who first captured my attention as a young Carrie Bradshaw’s best friend in “The Carrie Diaries.”

(After the show was canceled, it was revealed that the principal cast’s women of color had asked the producers for more inclusivity, criticizing the show for sidelining their characters and making them feel “like check boxes on a list”; Entertainment Weekly reported that there had been plans to address those concerns in Season 4.)

Then, of course, there was Brie, who was billed as the series lead and is similarly wonderful as the insecure yet plucky Ruth. But even though Gilpin’s three Emmy nominations were in the supporting actress category, she was always the crown jewel on the “GLOW” tiara for me.

Gilpin has expressed her sorrow at the cancellation, writing in Vanity Fair: “It was the best job I’ll ever have. Our business is a strange mix of attempting childhood dreams to a room full of asleep people and shirking dignity for awake tomato-throwers for rent. This was one of those extremely rare times where we got to do the dream for awake people.”

Hey, if this acting thing doesn’t take off, Gilpin will have a bright future as a writer. But I would rather see a sprawling eight-season drama with her as the lead, where she could really show off the acting chops I’m sure we got only a glimpse of on “GLOW.”

3. ‘GLOW’ was a love story about women

“I was the one that got away,” Gilpin said about her character in a round table interview after the cancellation.

“From me,” Brie replied about hers.

Although Ruth and Debbie never quite make up — the fourth season was no doubt going to see a full-scale reconciliation — “GLOW” charts their journey back to each other as they try to bring their trust in the ring back into their personal relationship. Without wanting to spoil the final scene of Season 3, its riffs on rom-com conventions cemented for me the notion that “GLOW” was at its core a love story between Debbie and Ruth.

For as dissatisfying as that finale was as an ending to the entire series, I haven’t been able to stop thinking about it since I first saw it last year. It will forever keep bouncing around my head, keeping me guessing about the central “will they/won’t they” couple of the show. It seems Debbie is destined to remain the one that got away.

‘House of the Dragon’ Shares First Look at New Dragon

T.R. Knight Latest Grey's Anatomy Alum to Make Shocking Return, 12 Years After He Was Killed Off