Home » Entertainment » Blood, Passion and Captivity: Gentileschi’s Life Is in Her Paintings

LONDON — The National Gallery opted for a one-word title for its new blockbuster show: “Artemisia.”

The name of the exhibition, which opened on Saturday and runs through Jan. 24, 2021, has a pop star ring, befitting the most celebrated female artist of the 17th century. In her lifetime, Artemisia Gentileschi was lauded by the artist Jérôme David as “a miracle in painting, more easily envied than imitated”; today, she is the subject of feverish new scholarship, not to mention films, plays, novels and even a cameo in a 2017 children’s book, “Good Night Stories for Rebel Girls.”

But why does first-name familiarity seem to be so often applied to women artists and not men? Kahlo is endlessly referred to as Frida, but only Kanye West takes the liberty of calling Picasso just Pablo.

Perhaps the title is intended to distinguish Gentileschi from her father, Orazio, who was also an esteemed painter. Born in Rome in July 1593, she was 12 when her mother died in childbirth, and she was left in his sole care. Giovanni Baglione’s “Lives of Painters, Sculptors and Architects” (1642) describes Orazio as “more beast than human,” with a “satiric tongue” that “offended everyone.” But at least he was aware of the prodigal talents of his only daughter: When she was 18, he boasted to the Grand Duchess of Tuscany that she was “already capable of such works that many principle masters of this profession never arrive at.”

The National Gallery show is Gentileschi’s first exhibition in Britain, and it proves that her father’s statement sprang from more than parental pride (or a bid for patronage). The 29 paintings on display — just under half of the total works believed to be by her hand — demonstrate her startling emotional sensitivity as she brought a new kind of intimacy to the theatricality of Baroque art. 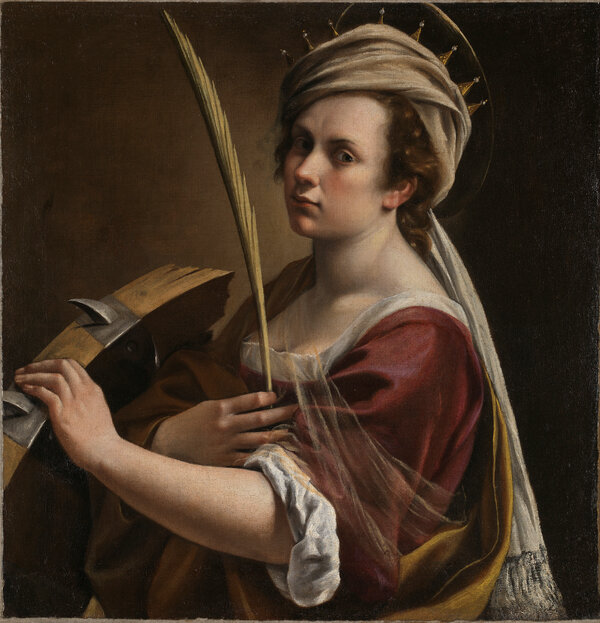 In 2018, the National Gallery acquired its first work by Gentileschi, “Self Portrait as Saint Catherine of Alexandria,” making her only the eighth female artist in a collection that has work by more than 700 men. The curatorial team recognized the opportunity to stage a major monographic show, which would resonate with the #MeToo movement and help counter the gender imbalance of the collection. The gains would be considerable, but it would be no mean feat: Those who own Gentileschi’s works don’t part with them lightly, several paintings are riddled with conservation challenges, and others are clouded in dispute.

Women artists were rare in early modern Italy, and they tended to be aristocratic. (When Germaine Greer wrote about Gentileschi in 1979, she called the chapter “The Magnificent Exception.”) Becoming an artist required much more than “a room of one’s own,” so the few women who managed to become professionals generally had fathers already in the trade. To quote Simone de Beauvoir: “One is not born a genius, one becomes a genius” — and it is the becoming that’s been the trouble for women for centuries.

It feels fitting, then, that the exhibition’s opening room features a work by Gentileschi’s father, “Judith and her Maidservant,” especially as she would later make the subject her own. Some scholars have argued for this work to be attributed to his daughter, and, while that is now thought unlikely, it’s important to understand her artistic debt to his style, which borrowed heavily from Caravaggio’s flare-lit scenes, worked up from live models in the studio.

How could it have been otherwise? A male apprentice would have roamed the streets of Rome and drawn directly from facades and frescoes; Gentileschi was almost exclusively restricted to the upper floor of her home, where she had only her father’s work and some engravings for inspiration. In court documents, she described her captivity as “noxious”; after all these months of lockdown, the feeling is familiar.

The show’s opening room also features Gentileschi’s earliest known painting, “Susannah and the Elders,” from 1610. This is the biblical story of the beautiful wife of Joachim, who is preyed upon while bathing in her garden by two lascivious old men who threaten to accuse her of adultery (punishable by death) if she does not submit to their advances.

The bodily proportions in this work are uneven in places — perhaps inevitably, given that the only anatomy Gentileschi could have studied in detail at this point was her own — and the textiles lack the tactility of her later works. But these are easily forgiven when you turn to the luminosity of Susannah’s flesh and the nuance of her expression: Watch how centuries are collapsed in that look of disgust.

Gentileschi, who was just 17 when she painted Susannah’s contempt, may well have been drawing on direct experience. We know that the following year, in May 1611, Agostino Tassi, a collaborator of her father’s who had been employed to teach her perspective, raped her. Orazio denounced Tassi to the authorities after he refused to marry his daughter, and the trial that followed has come to be synonymous with Gentileschi’s name. Recorded in minute detail in paperwork discovered in 1876 and exhibited in this show for the first time, the court records offer crucial insight into the dreadful treatment of women in early 17th-century Rome.

Tassi had previously been tried for incest with his sister-in-law, and he had also been accused of shooting a pregnant lover, but his assault on Gentileschi could only be considered a crime if she could prove that he had violated her virginity — this being a matter of damaged property, rather than personal damage. She was subjected to a public gynecological examination, and then tortured to see if she stuck to her testimony, forcing her to cry out: “It’s true, it’s true, everything I said was true!” Although found guilty, Tassi’s punishment was scant: He was banished from Rome, but the exile was never enforced.

How then can we look at the defiant strength of Gentileschi’s paintings without thinking of what she endured? That question has preoccupied scholars of her work since at least 1976, when Linda Nochlin and Ann Sutherland Harris featured Gentileschi prominently in their groundbreaking exhibition “Women Artists: 1550-1950,” at the Los Angeles County Museum of Art, and the two curators included information about the trial in an accompanying publication. How much biography finds its way into artists’ work remains a fraught question. In an essay in the National Gallery’s catalog, Elizabeth Cropper writes that dismissing the experiences that shaped Gentileschi leads to “a dismal narrowing of our understanding” of her life and work, and I am inclined to agree.

Take Gentileschi’s famed “Judith Beheading Holofernes,” which she painted twice around 1613, after fleeing to Florence with a husband Orazio had hastily sought for her to quell the scandal of the trial. In the painting, Judith and her maidservant pin down Holofernes, an Assyrian general, whose eyes bulge as blood sprays from a wound Judith carves in his neck with a knife. There was a fashion at the time for depictions of strong biblical women (all the more titillating if, like this Judith, they resembled their painters), and plays of Old Testament stories were performed at the court of the Medicis, who were Gentileschi’s patrons during her years in Florence. But can this fully account for the violence and viscera of the scene?

Look at the tufts of hair caught between Judith’s knuckles as she clutches Holofernes’s skull to sever the arteries of his neck. This is one of many occasions when Gentileschi makes Caravaggio look tame: In his rendition of the same moment, a meek Judith leans demurely to one side, bemused and limp-wristed. The stark difference suggests Gentileschi is both drawing on her intimate experiences of the brutality of life at the time (such as the deaths of four of her five children), as well as shrewdly amplifying her notoriety from the rape trial to market herself for future commissions of formidable women.

Maybe that was part of what she meant when she told her Sicilian patron, Don Antonio Ruffo, “I will show your Illustrious Lordship what a woman can do.” The meticulous selection at the National Gallery by the curator, Letizia Treves, certainly showcases Gentileschi’s strengths: rich pigments, sumptuous textures and heart-rending emotion. That such a powerful body of work has been brought together in just two years, despite all of the obstacles and additional delays brought about by a global pandemic, is testament to that sentiment, too.

Artemisia
Through Jan. 24, 2021, at the National Gallery in London; nationalgallery.org.uk.