“Shipwreck,” a fantasia about white liberals and the president’s infamous dinner with James Comey, has been adapted into an audio play. 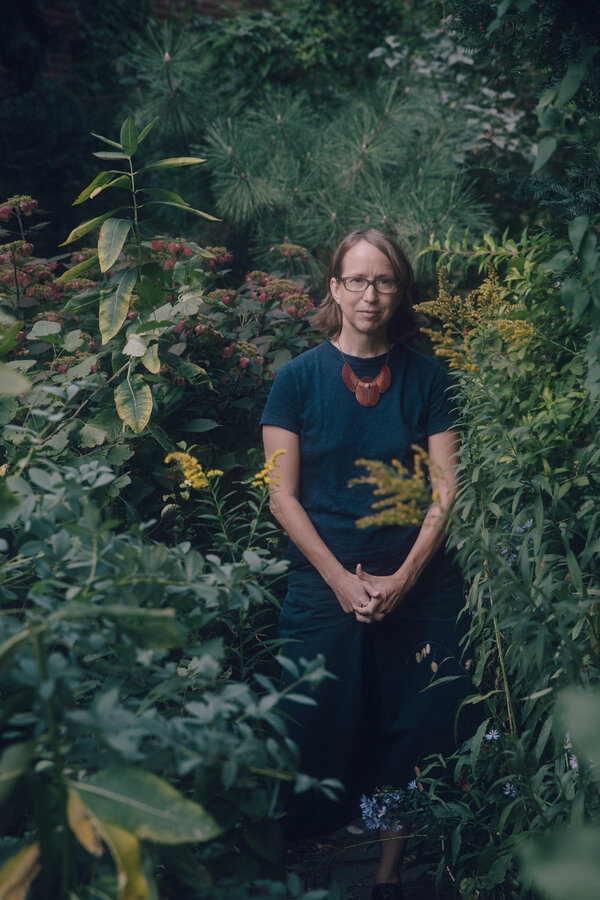 When Anne Washburn wrote her play “Shipwreck,” in a white-hot dash inspired by a single news cycle of the Trump era, she didn’t care whether it had a future.

It was June 2017, and as Washburn was on her way to a silent playwriting retreat, the former F.B.I. director James B. Comey had just testified to the Senate Intelligence Committee about the infamous dinner in which President Trump demanded his loyalty. She spun the story into a sprawling fantasia, rooted in realism but ascending toward the mythic, about a group of liberal New Yorkers, their weekend getaway at an old farmhouse upstate and, of course, that dinner.

“I thought it would be a good way to clear my head,” recalled Washburn, whose daringly imaginative output includes “Mr. Burns, a Post-Electric Play.” “It really was just a play for one year. I thought it was going to be completely out of date at any moment. But it’s become a play for four years.” 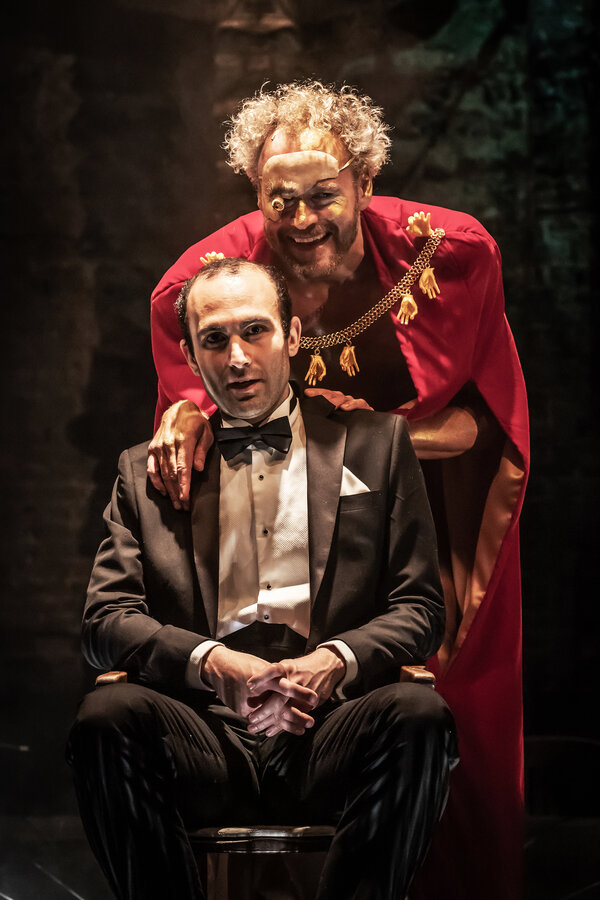 Many of the play’s threads — even as it has been slightly revised, from its premiere at the Almeida Theater in London last year to its American debut at the Woolly Mammoth Theater in Washington this February — have remained in the national consciousness. Its conversations about activism and race seem eerily prescient.

And now “Shipwreck: A History Play About 2017” — still a chattering mirror of our moment’s too-muchness — is about to find its widest possible audience yet. In a change of programming prompted by the coronavirus pandemic, it has been adapted into an audio play, produced by the Public Theater and Woolly Mammoth, out now as a three-part podcast.

This version, replacing a canceled staging at the Public, was directed by Saheem Ali, who also oversaw the Woolly Mammoth production, as well as the Public’s first pandemic audio play, Shakespeare’s “Richard II.” When he first read “Shipwreck,” he said, he wasn’t entirely sure what to make of it “because of how so deeply theatrical and political it was.”

“How can these two things live side by side, with these ideas and this language?” he continued. “I feel it in my bones that there’s something urgent and astonishing about what she’s written.”

The play, which displays “boundless empathy,” Ben Brantley wrote in The New York Times, doesn’t at first appear to lend itself to audio. The dialogue moves quickly, among many characters; scenes progress fluidly from the present to the past to pure fantasy. The two scenes with Trump (Bill Camp), an imagined meeting with George W. Bush (Phillip James Brannon) and a climactic encounter with Comey (Joe Morton), are “explosively theatrical,” Ali said. So the new production leaned heavily on sound design, by Palmer Hefferan.

“The thing about ‘Richard’ is that I had discovered the strengths of sound,” Ali said. “The creaking floors and the fireplace felt necessary to conjure for a sense of realism, like you’re eavesdropping. Then that’s in concert with these leaps of fantasy.”

Over Zoom from her apartment in Brooklyn, Washburn talked about making art in the Trump era, how “Shipwreck” has evolved — notably, she excised the Black protagonist, Mark, whose monologues amounted to an entire subplot — and what she hopes for its future. Here are edited excerpts from the conversation.

Art made in moments of crisis tends to fall along a spectrum. At one end, perhaps, is blunt agitprop, and at the other is pure abstraction. What interests you?

The conversations in “Shipwreck” offer no clear conclusions. Do they reflect similar gatherings you’ve had with liberal friends in real life?

Interestingly, when this was rehearsed — in London and then at Woolly Mammoth — we really had to say to the cast: Remember what it was like in 2017, when we still had all the energy to go into these things at length. It’s not like we’ve stopped talking about it, but at the time there was more to explore and a kind of freshness. So these conversations, I think, capture where we were almost four years ago. We were more innocent.

Even a mention of James Comey feels quaint, like distant history.

It feels like distant history, but also I’ve said that when I wrote this play and it was done I assumed that I’d have to rewrite it massively. And that wasn’t the case. The dinner with Comey was so early on, it still gets a little bit of the original sin of the Trump administration.

It is remarkable how sturdy the script has been from the first staging until now. I feel like that gets at something about the moment we’re living through: So much happens, so quickly, but the themes are generally consistent.

Yeah, there’s a structure in the play, which has been there from the beginning, that characters can speak into the future: What if this happens? What if this happens? I thought I’d have to exploit that at some point to incorporate some crazy new thing that would have occurred — I mean, which still could occur. But for all that Trump dazzled us with the variety of outrage, there are some really consistent underlying themes to what he’s doing and what his motivations are. It might be that you could pick any one week of news in the Trump era, and if you really get into it, basically have the same set of continually reverberating dramatic and political problems.

Can you talk about how you arrived at your depiction of Trump?

I will say that because I was writing so quickly, I wasn’t particularly making decisions that I could unpack later. I do know that I felt strongly that any depiction of Trump should not be obvious and clownish. The first scene, with Bush, is I think very much Trump as his supporters genuinely see him, and also I think as he genuinely sees himself. The second portrayal, with Comey, is more Trump the 12-D chess player — that Trump supporter’s fantasy of him, but also a liberal’s worst nightmare of him. My instinct as a mad person was to make him stupid, but it’s not the most interesting thing to do, and he doesn’t have 40 percent of the population in his thrall because he’s stupid.

The most substantial change in this version of the play is the absence of Mark. What led to cutting him out entirely?

When I was writing this initially, I was writing a Black character talking about Black racial trauma in America. I did not know if it was my story to tell, but I felt that real discussion could happen from it. Then George Floyd was murdered in Minneapolis, and a lot of discussion started up, and it just felt as though this was not a time for people to encounter that discussion written by me. Along with a lot of other discussions happening in the American theater about who’s being given the bandwidth to tell these stories, it just felt like this play was going to cause pain rather than be a productive discussion. I thought I would withdraw the play, and Saheem Ali really felt like we had this play without Mark. And yes, you do. It’s not the same play; it’s a different play.

Those conversations about race still happen, but the perspective changes from a Black one to a white one. I’m wondering whether there’s actually some sort of opportunity there, artistically and even sort of politically, in depicting white liberals struggle to talk about it.

I sat down with a bunch of different people, and I was told that when you had Mark in the play, everyone in the audience, including all of the white liberals, knew who their allegiance was with. You’ve got your guiding star. When you remove that person, you are more sitting in this house with this group of largely white liberals, and if you are a white liberal yourself, that’s a more complicated place to be.

Plays are powered by artifice, and I think there is an artifice in the degree of discussion that happens in the house, since my experience of white liberals is that generally we don’t talk about race, or we do, but really carefully in a prescribed way. And if there’s any divergence with that: freakout, emotional maelstrom, end of all discussion. I do think that when it comes to talking about race, white liberals have essentially the vocabulary of 3- or 4-year-olds. Or we did at the beginning of the pandemic. Now we’re kind of like semi-bright fifth or sixth graders.

What is the afterlife of this play when Trump is no longer in office?

If Trump is not president in January, I think we won’t want to think about him again for a long time.

I’m all for it. I wish nothing more for this play than to be irrelevant.