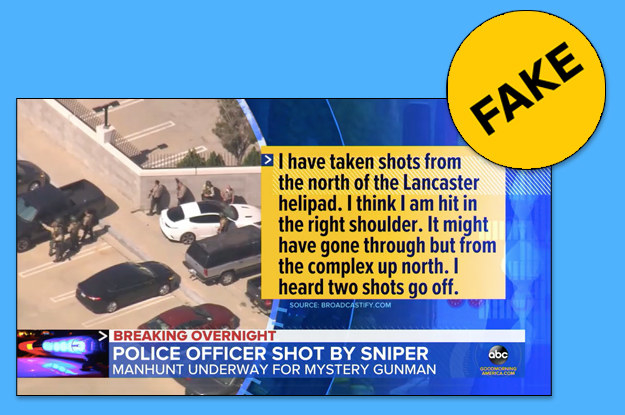 A Los Angeles County Sheriff’s deputy lied about being shot by a sniper last week and will be fired from his job, authorities said on Saturday.

The deputy’s report — that he’d been shot at by an unseen attacker from a nearby apartment complex — sparked a manhunt in northern Los Angeles County. But at a press conference late Saturday, Kent Wegener, captain of the Sheriff’s homicide bureau, said Deputy Angel Reynosa’s story was “completely fabricated.”

Reynosa will lose his job and could face criminal charges, Wegener added. An investigation into the false report will also be referred to the district attorney’s office, he said.

On Wednesday, Reynosa claimed he had been in the parking lot of the sheriff’s station in the city of Lancaster when he was shot at from a nearby apartment complex, sparking a full-scale response from the sheriff’s department that involved a SWAT team working with deputies to secure the area. Wegener said the residents of the complex were evacuated, roads closed, and public transit diverted while they investigated Reynosa’s claims.

Wegener said there were inconsistencies in Reynosa’s claims from the outset. Witnesses interviewed by investigators did not hear a gunshot, and there were no bullets found at the scene where Reynosa claimed he was shot. The deputy was rushed to a hospital at the time, but Wegener said there was no gunshot wound on his shoulder. Reynosa then admitted to fabricating the story in an interview with authorities, as well as faking evidence of an attack, authorities said.

“Angel Reynosa admitted that he was not shot at from the apartment complex area, as he previously claimed,” said Wegener during the press conference. “He also told investigators that he had caused the holes in his uniform shirt by cutting it with a knife. There was no sniper, no shots fired, and no gunshot injuries sustained to his shoulder.

It’s not clear what caused the deputy to fake the sniper incident.

“Reynosa failed to provide information regarding his motivation for this act,” Wegener said.

The manhunt for the non-existent sniper lasted a full day, ABC News reported, and investigators at the time warned about the perpetrator still being on the loose. In an Aug. 21 press conference, Lancaster’s mayor spread alarm about the severity of the situation.

“Think about what happened here today, a sniper took out one of our deputies,” Mayor R. Rex Parris said in an Aug. 21 press conference, before learning it was a hoax. “And the only reason that deputy is alive is because he had his vest on.”

Wegener described Reynosa as a 21-year-old new deputy who was still in training. He added that any charges filed against Reynosa will be up to prosecutors, but one possibility would be a false report of an emergency.

“I’d like to reiterate to the citizens of Lancaster, your community is safe,” said Robin Limon, the assistant sheriff. “There’s no one on the loose in that community. I apologize for the inconvenience that that was imposed on you.”