As drums and cymbals of Taoist funeral music filled Queenslab, an 8,000-square-foot art space in Ridgewood, Queens, four performers chanted, marched, and body-slammed one another. They were dressed in identical, modified hooded tracksuits and tennis shoes, their faces hidden behind white masks. Height became their only distinguishing feature.

Tragedy haunts Kenneth Tam’s live performance-art piece, “The Crossing,” inspired by his research into the hazing rituals of Asian-American fraternities and fraternities of color more broadly. Lumi Tan, a curator at the Kitchen, invited Mr. Tam, 38, to develop and perform the piece in partnership with Queenslab, a former carpet warehouse just a block from the sprawling belt of cemeteries that separates Brooklyn and Queens. I witnessed its final rehearsal before the work is livestreamed by the Kitchen on Dec. 5 and 6. (Tickets are free but viewers must register here.)

The rituals in “The Crossing” are inspired by a group of online videos that Mr. Tam first encountered last November. Deep into a YouTube “rabbit-hole,” in his words, the artist came across a video posted by the Asian-American fraternity Pi Delta Psi’s New York University chapter. Footage shows a row of young men standing in Washington Square Park, in black masks, red ties, and dress clothes. Like recruits in boot camp, they bark out scripted lines while following highly coordinated movements. They step together, kneel, or bash their closed fists against their chests. Spectators cheer them on. As Mr. Tam learned, the video captures what’s known as a probate: a public presentation of a Greek organization’s newest additions as they “cross” over to their new lives as fully fledged members, and are unmasked to an audience with great fanfare.

Pioneered by African-American fraternities, probates were eventually adopted by other Greek organizations of color across the United States. As ritualized performances, probates were of natural interest to Mr. Tam, whose work has long explored “moments of intimacy and vulnerability within groups of men,” as he put it in an interview by Zoom in November. One of the artist’s recent videos looks at Asian-American men in the context of American cowboy culture. Titled “Silent Spikes,” it will be screened in public for the first time this week, followed by a conversation with both Kyung An, an assistant curator at the Guggenheim, and Sophia Marisa Lucas, a Queens Museum assistant curator who is organizing a solo show of Mr. Tam’s two-channel video installation with sculptures set to open next year. “At its core, Kenneth Tam’s work expresses the necessity of care and intimacy,” Ms. Lucas said in an email, noting that his upcoming exhibition “departs from an underrecognized history to explore how movement and connection can help us to honor selfhood and transcend centuries-old social narratives that exploit difference.” 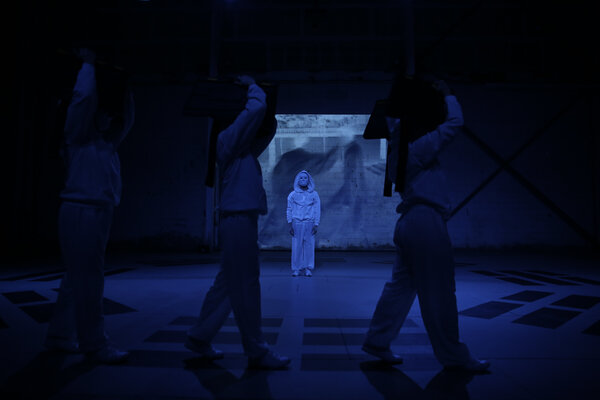 Though Mr. Tam also uses other media, ranging from photography to sculpture, his recent video work features unscripted interactions between male “participants,” as he calls them. With open-ended prompts, he persuades them to talk about awkward subjects and act out awkward scenarios. In Artforum magazine, the critic Bruce Hainley has praised the artist’s “engrossing” videos, describing Mr. Tam’s projects as “heir to the rowdy incorrigibility of Jackass and its blunt knockoffs, like Impractical Jokers.” I like to think of Mr. Tam more as a freewheeling and slightly sadistic improv teacher bent on pushing everyone out of their comfort zone. In one video, he prompted participants to wear tuxedos and re-enact striking prom-photo poses. For the “Made in L.A.” art show at the Hammer Museum, Mr. Tam solicited men from social networking online forums to bring them together for a series of playful activities. At one moment, attendees each describe another man’s physical attributes to his face. Their squirming responses to essentially harmless activities are caught in close-up shots. According to Mr. Tam, these are moments when participants’ “internal social scripting fails them, and they have to do something for the very first time.”

In “The Crossing,” however, Mr. Tam forgoes improvisational humor for choreographed gravitas. In examining Asian-American fraternities, he pays particular attention to the story of Chun Hsien Deng, who went by Michael, a Pi Delta Psi pledge at Baruch College. In 2013, during a hazing ritual known as the “glass ceiling,” Deng was shoved to the ground while blindfolded and carrying a backpack filled with sand. He died the next morning of traumatic injuries to his head. Pi Delta Psi was found guilty of a felony count of involuntary manslaughter and four of his fraternity brothers were sentenced after pleading guilty.

Mr. Tam remembers feeling a sense of recognition as he learned about Michael Deng’s life. They’d both gone to specialized math and science schools in the city: Mr. Deng to Bronx Science, Mr. Tam to Stuyvesant. “He played handball, I played handball,” Mr. Tam said. “Long commutes, hanging out in Flushing, or those kinds of Asian spaces — that all felt very, very familiar.”

Mr. Tam was also struck by a New York Times Magazine piece about Mr. Deng by the writer Jay Caspian Kang. The essay made waves among many Asian-American youth, giving voice to the feeling that the tragedy of Mr. Deng’s death was somehow compounded by a melancholy, and futility, that underpins any search for Asian-American belonging. As Mr. Kang’s essay argued, “‘Asian-American’ is a mostly meaningless term.” He added, “nobody sits down to Asian-­American food with their Asian-American parents and nobody goes on pilgrimages back to their motherland of Asian-America.”

Those lines are among the first words uttered in “The Crossing.” Later on, one of the performers reads a letter by Mr. Deng’s roommate shared in Mr. Kang’s article. Much of the action onstage takes place within the Taoist diagram of a bagua — the energy map. It’s Mr. Tam’s way of nodding at the yin-yang symbol in Pi Delta Psi’s coat of arms — a “convenient shorthand for Asian-American identity,” according to Mr. Tam, “which is itself kind of problematic, as a westernized notion of Asian-ness.”

That coat of arms is just part of a larger issue. As Mr. Tam notes, these fraternities try “to express Asian-ness, but they do so in the most conservative, Western way, particularly with the hazing, which has nothing to do with being Asian. You’re just taking these oppressive models found in the military or other sorts of places that are about destroying individual identity in order to embolden the group.”

Which isn’t to say that the artist is exempt from the appeal of, say, a Pi Delta Psi probate video, which he likens to a sales video. “Like, if you do this, then you get this — hanging out, getting dim sum at a party. Things that young men do.”

“That’s the sad part,” Mr. Tam said. “You can’t just hang out. You have to create this apparatus in order to get to that.”

“I’m sure there are other things at stake when you join a fraternity — ideas about brotherhood, and history,” he added. “But for me it seemed like this long, roundabout way to get to this ability to just commune with other young men.”

Many of Mr. Tam’s videos have been made at a time when the phrase “toxic masculinity” has become a common term.

So what does he think of it?

“Certainly people have looked at my work and used that term. I wouldn’t deny that,” he replied, adding, “I’m not interested in pointing out the sort of more malignant parts of masculinity. I think we can sort of all do that on our own.”