How does an unknown artist capture a broad audience? “Location, location, location,” said Otis Houston Jr., applying the real estate adage to a strip of pavement alongside the Franklin D. Roosevelt Drive in Harlem where he has delighted and perplexed motorists since 1997 with his performances, banners and assemblages of found objects.

Having developed a cult following along the highway over the years, Mr. Houston is now represented by Gordon Robichaux and will have a star turn in the gallery’s booth at Frieze New York, the blue-chip art fair on view at the Shed starting Thursday.

“It feels great. It’s my time,” said Mr. Houston, 67, who works by day as a custodian in a Midtown office building and returns to his spot on the F.D.R. Drive during off hours. “The more I work, I wish there were two of me. I’d have it covered.”

At Gordon Robichaux last month, where his second solo show was on view, the charismatic performer recounted his unlikely path into the art world. He grew up in Greenville, S.C., where his father, grandfather and uncle worked as plasterers. After moving to Harlem in 1969 as a teenager, he fell in with a bad crowd and was imprisoned twice, for a total of more than seven years in the 1970s and ’80s, on drug charges. 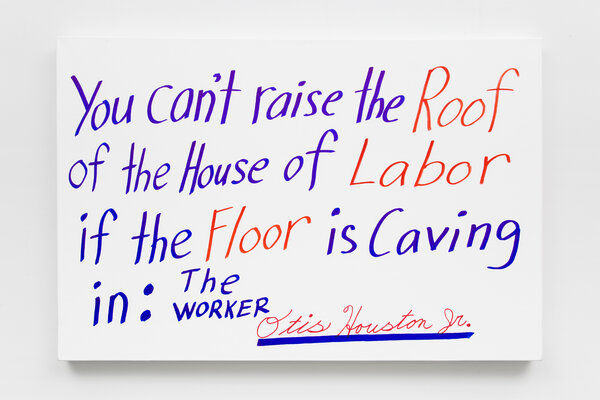 While in prison, he read voraciously, earned a high school equivalency diploma and took art classes as a form of therapy — remixing text and images from magazines in collages. “I take what I see and what I feel like I’d like to see,” he said.

Living in public housing near East 122nd after his release, where he could see from his terrace how the traffic on the highway slowed and narrowed to one lane before the Triborough Bridge, he spotted his stage.

“It found me,” said Mr. Houston, who began going to the highway to lift his spirits as his mother was dying from cancer.

There, spray-painting messages on old towels from a gym where he once worked and arranging tableaux of flowers, fruits and toys, he might strike a pose with a book in one hand, a broom in the other and a watermelon rind on his head. “Knowledge. Work,” said Mr. Houston, leaping to his feet to pantomime his stance. And the watermelon? “I’m just showing off, good for the attention,” he said, laughing heartily.

Mr. Houston thrives on the direct feedback he gets from cars honking and people calling to him. He has attracted the attention of The New Yorker magazine, where he was written about in Talk of the Town in 2001; a founder of the artist-run gallery Canada in TriBeCa, who included him in a 2009 group show; and two filmmakers, who produced a short documentary on him called “Black Cherokee” in 2012.

Mr. Houston said the police have given him more than 60 tickets, citing things like “giving gang signals” and littering, all but two of which he has managed to have dismissed in court, one by a judge who the artist said pronounced “Art for art’s sake!” with a gavel bang.

The artist Miles Huston was a student commuting from Brooklyn to Boston around 2004 and distinctly remembers seeing Mr. Houston sitting shirtless in a rocking chair and waving to cars, an apple balanced on his head and red tape covering his mouth, with a towel strung up on the fence behind him reading, “Hey Donald Trump, wanna go fishing?”

Repeatedly thunderstruck by such performances, Mr. Huston eventually called the phone number on Mr. Houston’s sign and befriended him.

“People make assumptions that there’s something wrong with Otis, but he’s a total genius and just on another level when it comes to how he uses language,” said Mr. Huston, whose work is also shown by Gordon Robichaux. He introduced Mr. Houston to the gallery in 2017.

The two artists have collaborated on several projects, including a 2016 show at the artist-run space Cave in Detroit, where they critiqued power relationships. Hanging an artwork on the highway or in a small gallery or in a major museum “might change your experience of how you value the work,” said Mr. Huston.

The two went to MoMA and measured the doorways in the collection galleries. Then, on panels hung very high at the Detroit gallery, as if in the margins above MoMA’s doorways, Mr. Houston painted some of his aphorisms, including “We not in the same boat but we all in the water.”

Mr. Huston said his colleague “just taps in to some kind of mass psychology and can hover in between spaces.”

A health and exercise guru, Mr. Houston keeps copious journals filled with his philosophies and things he has read or seen that may find their way into his text pieces.

At the gallery, he pointed to a towel spray-painted in red, black and blue with the poetically open-ended phrase “Can I Live,” lifted from a hat given to him on the highway. The piece was bought by the artist Jim Hodges. While Mr. Houston once occasionally sold works to his roadside audience, he now has an enthusiastic following of collectors in the contemporary art world.

“I feel like the art world is catching up to Otis,” said Sam Gordon, co-founder of Gordon Robichaux, which focuses on emerging and less-recognized artists. “He’s been talking about systemic racism, social injustice, all these things since 1997 on the highway. We’re now waking up to that.”

In New York, Rebecca Ann Siegel, director of American fairs for Frieze, said Mr. Houston is an artist who “directly speaks to an experience of the city,” adding that “there’s a lot to be said for that in this exact moment.”

A focal point of the Gordon Robichaux booth will be a door that Mr. Houston salvaged from the building where he lives. On it he hand-lettered a long text he had in a journal, beginning with: “We are the canvas. Abstract. Original. Breathtaking.”

“It’s how I feel,” Mr. Houston said of the statement, which could read as an artist’s manifesto. The piece concludes: “The image always gets the last word (Me) (We).”