L’AQUILA, Italy — On a recent sunny morning, things were kicking into high gear in the Piazza Santa Maria Paganica, a square in the central Italian city of L’Aquila. Assorted officials, their entourages, journalists, passers-by and museum staff mingled excitedly in front of a Baroque palazzo, which was about to be opened as Italy’s newest bastion of contemporary art.

Yet across the piazza from the museum building’s cream-colored facade, which was gleaming after a decade-long restoration, the church that gave the square its name presented a sharp contrast. Though the outer walls are still standing, Santa Maria Paganica is in ruins, with no roof and scaffolding providing scant protection from the elements to the nave and side chapels. 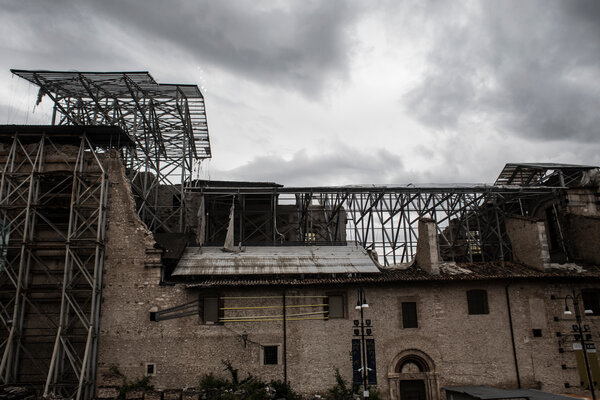 These are the two faces of L’Aquila, 12 years after a powerful earthquake shook the mountainous Abruzzo region, killing more than 300 people and leaving an estimated 65,000 homeless. Much of the damage was centered in this city, the regional capital, and so many buildings had been destroyed, including beloved historical monuments, that at first it appeared that the city might never recover

The recovery and rebirth of the Palazzo Ardinghelli, which will house the contemporary art museum, called MAXXI L’Aquila, tells the story of the city’s resurgence. But it’s also a signal that culture must play a fundamental role on the path to full recovery, said Giovanna Melandri, president of the MAXXI Foundation, which oversees the museum and its larger sibling, MAXXI Rome. (MAXXI is an acronym from the Italian for National Museum for the Arts of the 21st Century.)

“We are not a showcase, alien to the city and its social, cultural and civil forces, but a meeting place, a place for exchanges and collaboration,” Melandri said in a speech at the inauguration on May 28.

Earlier, on a tour of the building, Melandri said that MAXXI L’Aquila would “become a laboratory of sorts,” as she strolled through the main floor of the palazzo, where the museum’s first exhibition, “Point of Equilibrium,” was installed.

During the restoration of the 18th-century palazzo, which had also been rebuilt after another devastating earthquake in 1703, museum officials decided to leave visual traces of the disaster, including fragmented frescoes that were damaged when its ceilings collapsed.

Eight new works were commissioned for the show, which also includes an assortment of “jewels,” as Melandri called them, from MAXXI’s collection in Rome, including works by the Italians Maurizio Cattelan and Michelangelo Pistoletto, models by the Japanese architect Toyo Ito, and large mohair and silk tapestries by the South African artist William Kentridge.

These were plucked from the museum’s permanent collections, which consist of more than 500 pieces from the 1960s to now. It showcases a who’s who of contemporary Italian art, alongside foreign artists including the Indian-born British sculptor Anish Kapoor, the German painter Gerhard Richter and the Argentine installation maker with a penchant for spiders, Tomás Saraceno.

The site-specific works commissioned for MAXXI L’Aquila were all inspired, in their own way, by the city and its history, and it was only natural that several reflected on the 2009 earthquake.

Elisabetta Benassi’s salt sculpture “La Città Sale” plays on the Italian word for salt and is a homage to the painter Umberto Boccioni’s 1910 work “The City Rises,” which channeled the energy of Italy’s rapidly expanding metropolises after the Industrial Revolution.

Benassi’s work — two blocky forms resembling city skylines, jacked up on supporting platforms — reflects on the fragility of urban environments, “which aspire to be something permanent, but then, in reality, they aren’t — because they can be swept away and destroyed,” she said.

In 2018, to coincide with a retrospective of his work at MAXXI Rome, the Italian photographer Paolo Pellegrin was commissioned to take pictures of L’Aquila. Two haunting color photographs and an arrangement of 140 smaller images — black-and-white snaps of a still wounded city, with its scaffolded facades, empty cobblestones and abandoned apartments — are installed in one room at the palazzo.

“One of the ideas of this play between light and shadow was to create a sense of fracture and fragility,” Pellegrin said by phone from his home in Geneva. The photographs also play on the “relationship between the city’s scars and the beauty that continues to exist in L’Aquila, even if it has been devastated,” he added.

Wearing a T-shirt that said “Ask Me” in English and in Italian, Riccardo Rufini was one of several students from the Fine Arts Academy in L’Aquila who was helping visitors navigate the works. He had been assigned to explain a piece by the Moscow-born artist Anastasia Potemkina: centered on a hydroponic tank with local wildflowers growing in it. The work “is about the city’s resilience,” he explained.

Rufini has become especially attached to the piece, he said. Because the inauguration had been postponed twice when coronavirus cases spiked in Italy, Rufini took the plant home and looked after it there.

“My name is on the project,” he said proudly, pointing to the label on the wall.

The restoration of the palazzo was possible, in large part, thanks to the Russian government, which responded to a 2009 appeal by Silvio Berlusconi, Italy’s prime minister at the time. He called on countries to help pay for the reconstruction of L’Aquila’s monuments and churches, and Russia coughed up seven million euros, about $8.5 million; it was one of only a few countries that heeded the appeal.

After the earthquake, the scale of the devastation was daunting. Since then, stone by stone, and with funding and investment from a variety of sources, the city has slowly been re-emerging from the rubble.

But Dario Franceschini, the Italian culture minister, said that the state of the church of Santa Maria Paganica was a “sign that something isn’t working.”

The mayor of L’Aquila, Pierluigi Biondi, called for an international competition among architects and engineers to come up with a plan for the restoration of the church. “There are still many things to do,” he said.

Franceschini, the culture minister, agreed. “Let’s unite the two sides of the piazza, and we will do something great for L’Aquila,” he said.