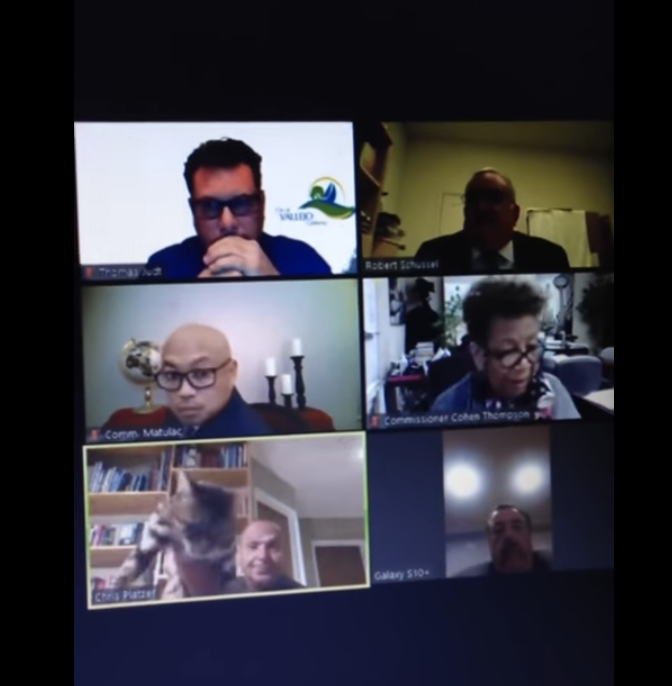 A California city’s planning commissioner has resigned after he threw his cat into the air during a Zoom meeting where city officials also said he drank alcohol and used derogatory language.

During the April 20 meeting, which took place via Zoom as the city practices social distancing because of the coronavirus pandemic, Vallejo planning commissioner Chris Platzer was asked if he had any comments regarding an agenda item the commission was discussing.

“Yes, if I’m allowed to make them,” Platzer said, after his cat was heard meowing loudly in the background.

“Yes, this is the section where you can, Commissioner Platzer,” the commission chair said, before another loud meow.

“OK, first, I’d like to introduce my cat,” Platzer said, raising the animal up to the camera for a moment, then tossing it aside. The cat lands off camera with a thud.

In an email to the Vallejo Times-Herald Saturday, Platzer apologized for his behavior and confirmed that he was stepping down.

“I did not conduct myself in the Zoom meeting in a manner befitting of a planning commissioner and apologize for any harm I may have inflicted,” Platzer said, according to the newspaper. “I serve at the pleasure of the council and no longer have that trust and backing.”

Platzer could not be immediately reached for comment by BuzzFeed News.

The City Council was set to consider a resolution to remove Platzer from the commission at its meeting Tuesday night. According to a city document, Platzer was also observed drinking an alcoholic beverage during the meeting.

After the meeting ended, but before the teleconference stream had finished, city employees also heard Platzer “using a derogatory and highly offensive epithet,” the document noted.

City officials did not immediately respond to BuzzFeed News’ requests for comment.

“The issue for me is his whole demeanor during the entire meeting,” Mayor Bob Sampayan told the Times-Herald, saying Platzer’s behavior could hurt the city’s credibility. “What happens if a developer is watching the meeting [and sees that]? They would obviously have concerns about the city.”