KOBLENZ, Germany — Earlier this month, a mushroom cloud erupted inside the neo-Classical theater of this small city in central Germany.

A musical mushroom cloud, that is. Theater Koblenz, a 501-seat theater built in 1787, became one of the growing number of German houses to present the operas of the American composer John Adams, with its springtime production of “Doctor Atomic,” a 2005 work about the nuclear physicist J. Robert Oppenheimer, who helped run the Manhattan Project.

Over the past three decades, Mr. Adams has become one the most frequently performed contemporary opera composers in the English-speaking world, renowned for “Doctor Atomic,” “Nixon in China” (about the groundbreaking 1972 presidential visit), “The Death of Klinghoffer” (about the 1985 hijacking of the cruise ship Achille Lauro by Palestinian terrorists), and “El Niño” and “The Gospel According to the Other Mary,” updatings of religious oratorios.

Yet it has taken a while for his work to gain a foothold in Germany, a country with a uniquely rich opera landscape and tradition, along with a longstanding suspicion of American styles like Mr. Adams’s eclectic brand of Minimalism. The new-music landscape here has tended to favor thornier modernist sounds and European composers.

“I was really amazed that we are only the third house in Germany to do it,” said Markus Dietze, 47, the artistic director of Theater Koblenz, after a recent performance of his fluid and focused production of “Doctor Atomic.” 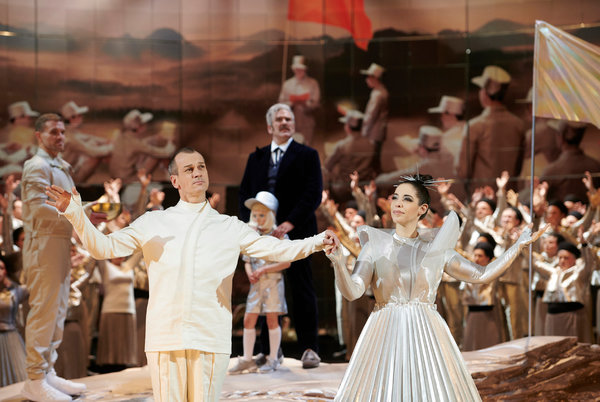 A wave of new productions suggest that the situation is changing. In the past few seasons Mr. Adams’s operas have been taken up, with relish, by a new generation of opera managers and directors, introducing German audiences to the all-American sounds and themes of the composer’s work.

Boosey & Hawkes, Mr. Adams’s publisher, say that there has been a spike in interest in his operas in Germany: The number of Adams stagings there from 2014 to 2020 is equal to the total number of productions in the quarter-century after the 1989 German premiere of “Nixon in China,” his first opera.

The Koblenz production of “Atomic” follows an acclaimed 2014 production in Karlsruhe, by the American director Yuval Sharon; by 2020 there will have been four new German stagings of “Nixon in China” in as many years. Only “The Death of Klinghoffer,” which hasn’t been seen in Germany since 2006, lags behind, possibly because of continuing controversy over its politics; a Metropolitan Opera staging in 2014 brought virulent protests that accused the work of romanticizing terrorism and anti-Semitism.

“You could say it’s been a long time coming,” the conductor André de Ridder, 48, said backstage before leading the third act of Marco Storman’s hallucinogenic recent production of “Nixon in China” at the Staatsoper Stuttgart.

Viktor Schoner, 44, who took over as Stuttgart’s artistic director this season, said, “When I came here, I said, ‘We have to talk about the ’80s,” referring to the brief period when the American avant-garde came to Stuttgart in the form of Philip Glass — the city presented the world premiere of his “Akhnaten” in 1984 — and the director Peter Sellars.

After considering several of Mr. Adams’s operas, Mr. Schoner decided that “Nixon” would resonate best with the local audience in this affluent city, synonymous with Mercedes-Benz. “Of course there’s the China connection, because without China this town would be dead,” he said with a laugh.

Rather than import Mr. Sellars’s 2011 Met production of “Nixon,” Mr. Schoner chose to entrust the work to someone who would look at it with fresh eyes. Mr. Storman, 38, a Hamburg-born director, created a visually striking staging that combined realistic and abstract elements in a surreal, at times David Lynchian, style.

Mr. Schoner found the opera’s themes newly relevant in light of President Trump’s diplomatic overtures to North Korea and the developing American trade war with China. “It’s rare to do a production that is so timely,” he said. “But it’s pure coincidence, because when we programmed it, Obama was still president.” (The Stuttgart “Nixon” will be revived in two seasons).

Janis Susskind, the managing director of Boosey & Hawkes, said in an email that “it feels like a changing of the guard,” adding that directors and opera intendants now view Mr. Adams’s operas as newly relevant.

In the lead-up to the composer’s 70th birthday, in 2017, Boosey heavily promoted his work for performance throughout America and Europe. Mr. Adams was named the Berlin Philharmonic’s first-ever composer in residence, with his music championed by Simon Rattle, then the orchestra’s chief conductor, and recordings released in an elaborate box set which included “The Gospel According to the Other Mary,” a highlight of Mr. Adams’s season in Berlin. Mr. Rattle, who conducted those performances, called it “one of the most moving pieces that we have performed in my years here.”

Ms. Susskind said that “the prestige of that Berlin season undoubtedly had a halo effect in Germany.” It also may have helped shatter certain prejudices against Mr. Adams’s music harbored by some German music critics.

“Given Germany’s modern music history, with Darmstadt and Donaueschingen, it’s a completely different path,” Mr. de Ridder said, referring to two influential, proudly modernist hubs of music education. “The people who believed in that were completely against American music and Minimalism and tonal music in general.”

But he added that he sensed that that was changing. “There’s an opening up of the repertoire, with room for more styles,” he said.

Traditionally it has fallen to smaller houses, like Koblenz, to stage Mr. Adams’s works. “It’s a tool for making themselves known in the scene, and then critics will come, often with European premieres,” said Mr. de Ridder. (For example, Augsburg, a small Bavarian city, earlier this season presented the European premiere of the American composer David T. Little’s “J.F.K.,” which was first seen in 2016 in Texas.)

The Staatsoper Stuttgart is the first major company in Germany to stage an opera by Mr. Adams since “Nixon” was performed (in German) in Frankfurt nearly 30 years ago. “This piece deserves a big stage,” Mr. de Ridder said. “It’s a visionary move to show this opera is a tradition-rich house like this one.”

But it won’t be the last time “Nixon” will bow at an important German company. Laura Berman has programmed the opera for her first season as artistic director of the Staatsoper Hannover, in a production by the American director Daniel Kramer, in May 2020. (Yet another “Nixon” is planned for Dortmund later next year.)

According to Ms. Berman, 59, an American who has lived in Germany since 1983, preconceptions about American music and resulting resistance from opera house administrators have made it difficult for Mr. Adams’s works to show up regularly on programs.

But, like Mr. de Ridder, she senses a shift.

“I think my colleagues are starting to get really what this music is about,” she said, “and understand how these musical structures work and why they appeal to people today.”

“People nowadays are so overwhelmed,” she added, “and this is music that slows you down, music that actually make you pay attention to central elements and helps you get in touch with who are we and where to we come from.”

She also pointed out that Mr. Adams’s music — like Mr. Glass’s — sounds ever more familiar to audiences, thanks to the influence of Minimalism on TV and film music. “There’s a connection with the kind of electronic pulse of our society,” she said, “the movement of contemporary life, because they have images in their mind with this music.”

In the past, the specifically American themes of Mr. Adams’s librettos — his newest, “Girls of the Golden West,” which premiered in San Francisco in 2017 and traveled to Amsterdam earlier this year — might have alienated foreign audiences. Such objections, Ms. Berman said, have fallen away in our globalized age, given greater mobility and the nonstop worldwide news cycle.

“The topics, which are so American, once seemed very far away and quite specific, but now society is much more mixed,” said Ms. Berman, one of the very few Americans (and women) to lead a major classical music institution in Germany.

The overtly political themes in Mr. Adams’s operas, in fact, might well make them uniquely appealing to audiences today.

“I think that because of the real political crisis at the moment,” Ms. Berman said, “that smart opera directors and dramaturgs are going to be thinking about Mr. Adams when planning their seasons.”