The podcast boom has produced plenty of star vehicles in audio form, and these celebrity-hosted shows are a cut above the rest. 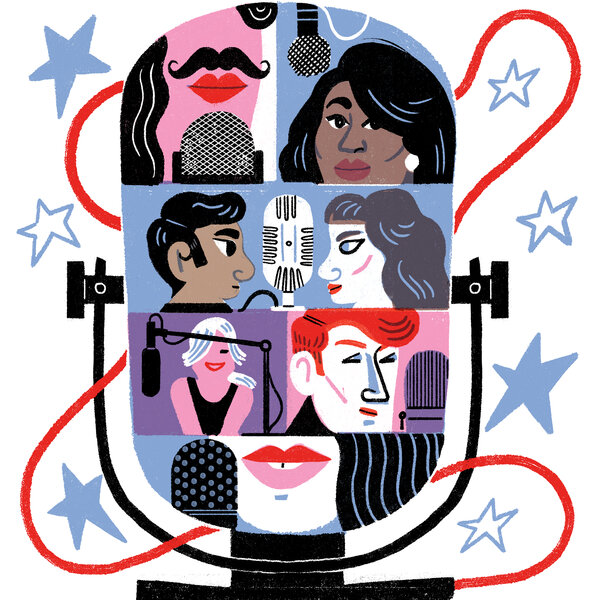 As the podcast boom has snowballed over the past few years, so has the number of star vehicles in audio form. Once seen as a hobby, or at best a side hustle, podcasts now provide an opportunity for stars to connect directly with their audience. And ever since the pandemic brought film, TV and live performances to a standstill, the format has become even more appealing as an inexpensive and safe way to create content. A household name at the helm is no guarantee of a good audio experience, but these seven podcasts hosted by celebrities are worth the listen.

The comedic actress Anna Faris (“Mom”), one of the earliest big names to get into podcasting, has been delivering an uplifting blend of laughs and heartfelt life advice since 2015. Every week, Faris welcomes a fellow comedian or cultural figure for a conversation that is always unscripted but often plays more like a humorous skit than a straightforward chat-show interview. In addition to her own affable persona, Faris plays a range of recurring characters on the show, including Chad, a doltish, oblivious bro; and Karen, a jaded, eccentric Hollywood studio executive to whom guests pitch movie ideas. Each episode ends with a Dear Abby-inspired segment in which Faris and her guest call a listener who has reached out for guidance. Unqualified though they may be, Faris & Co. always deliver.

‘The Left Ear With Dakota Johnson’

“Using your platform for good” is a common, yet sometimes unclear, refrain among celebrities. But this riveting six-part audio series showcases the actress Dakota Johnson (“Fifty Shades of Grey”) using her own platform in a very specific way: to elevate the stories of sexual abuse victims around the world. “The Left Ear” is a compilation of candid first-person stories about sexual violence, presented without editorializing, told to Johnson via voice mail. In 2018, she put out a call inviting victims to anonymously share their experiences. Johnson’s soothing voice sets the tone with a brief introduction to each episode, inviting the audience to set aside preconceptions and simply listen, and ending with the phrase: “We hear you. We witness you.” The result is dizzyingly powerful.

Conan O’Brien getting into podcasting, which came as his iconic late-night talk show was on hiatus at the end of 2018, was a landmark moment for the format. The hit series is, unsurprisingly, a total pleasure, beginning with its premise: that O’Brien has no friends outside of work, and therefore has to invite people like Tom Hanks, Maya Rudolph and Keegan-Michael Key onto his show for company. After stating upfront how they feel about being O’Brien’s friend — their reactions range from “euphoric” to “fully indifferent” to “confused” — the celebrity guest of the week sits down for a warm, amusing and sincere conversation, in which O’Brien’s self-effacing weirdness always encourages a sense of real intimacy.

‘Staying In With Emily & Kumail’

Kumail Nanjiani and Emily V. Gordon established themselves as a comedic power couple a few years back with the debut of their Sundance breakout “The Big Sick,” which told the story of their early courtship during which Gordon was hospitalized with a near-fatal inflammatory disease. That illness means that the couple has some experience with self-isolating, and when the Covid-19 lockdown hit, they were uniquely placed to speak to the weirdness of the moment. Each episode is simply a candid, funny, often affecting conversation between Nanjiani and Gordon on all sorts of topics, whether pop culture favorites, embarrassing childhood memories or the psychological toll of the pandemic. With a tone that falls somewhere between a standup set, therapy session and dinner conversation with close friends, “Staying In” is the ultimate 2020 comfort listen.

Starter episode: “In The Weirds”

‘Getting Curious With Jonathan Van Ness’

The bubbly breakout star of “Queer Eye,” Jonathan Van Ness began his podcast just a few months after the first season of the show debuted on Netflix in 2018. But “Getting Curious” is not the venture of a new star seeking to capitalize on his fame; rather, it’s an opportunity for Van Ness to ask questions about the world and spotlight experts in fields that don’t tend to get the red carpet treatment. The show’s wide-ranging recent episodes have covered Native American rights, unions and antiracism, as well as more idiosyncratic subjects like “techno-chauvinism” (i.e. unconscious bias in computer systems) and the threatened future of bees. Every episode is delivered with Van Ness’s trademark irreverent humor and sass, as evidenced by titles like “Is Trump an Autocratic Basic B?”

Starter episode: “Are You Getting Every Word of This? With Erin Brockovich”

The former first lady Michelle Obama is famously not a fan of politics, and so it’s no surprise that her much-anticipated podcast is not a political show. But the personal is political, and Obama is cognizant of that as she leads a series of down-to-earth conversations about relationships, parenting and values. The podcast started with a bang over the summer when Obama introduced her first guest: her husband, President Barack Obama, who reflected on what it means to show up for your community in a time of crisis. Other Season 1 episodes have woven interviews with family members and friends with her insights into her upbringing, her work for nonprofits and her post-White House life.

Podcast-to-screen adaptations are a dime a dozen right now, but this audio companion to “The Daily Show” makes a strong argument for the reverse. Bringing the same insight and nuance Noah has been known for since he took over the show from Jon Stewart in 2015, the “Ears Edition” features a mix of unaired segments, backstage clips and discussions of the week’s top stories. Shorter “In Case You Missed It” episodes let listeners catch up on segments that did air, while other installments focus a single satirical idea. One recent episode was a parody of the political history podcast “Slow Burn,” breaking down President Obama’s “latte salute” in faux-painstaking detail, highlighting the yawning gulf between what constituted a controversy in the Obama years compared with one in 2020.