Home » Entertainment » 5 Things to Do This Weekend

A Bouquet for the Ears 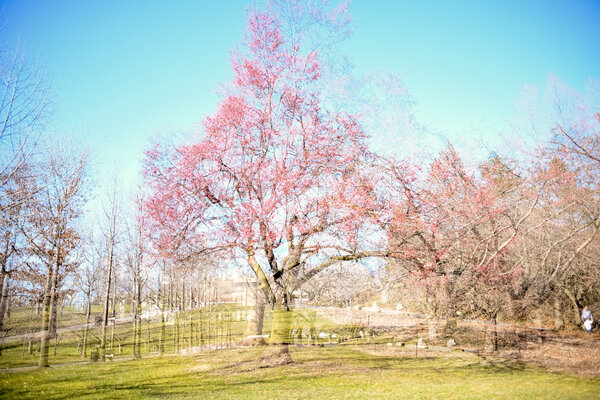 Last year, the composers Gelsey Bell and Joseph White created “Cairns.” That serene sound walk led listeners through sinuous miles of Green-Wood Cemetery, with stops at the graves of women interred there and moments to ponder questions of mortality, environment and time.

In a new and shorter work, “Meander,” created for the Brooklyn Botanic Garden, Bell and White take participants on a leisurely stroll across a couple of its acres. “To meander is to react to what and who is around you,” Bell says in a tranquil voice. The narrators suggest focusing in on the local and particular — like one Caucasian wingnut (yes, that’s the tree’s actual name) — and then zooming out to think about the world and how you walk through it.

“Meander” is free to listen to at bbg.org, whether you elect to enjoy it while wandering through the garden or, if that trip is beyond your means or comfort, to envision its landscapes from home. Close your eyes, prick up your ears and imagine the coming spring.
ALEXIS SOLOSKI

Not Your Average Barre Workout

In ballet, the barre is the pole that dancers hold while practicing, but the word also signifies the practicing itself, the daily discipline. That discipline and its fruits are celebrated in “The Barre Project (Blake Works II),” a new collaboration between the inventive choreographer William Forsythe and the New York City Ballet star Tiler Peck.

It’s a 30-minute film, which will stream free on the digital dance platform CLI Studios on Thursday and Saturday at 8 p.m. Eastern time (go.clistudios.com/barreproject). The music, by James Blake, leans melancholic, but don’t expect this display of discipline to be dour. It’s mostly a blast.

While Peck and three fellow experts (Roman Mejia, Lex Ishimoto and Brooklyn Mack) do start at the barre, they soon leave it the way a racehorse leaves the starting gate. Forsythe’s excited complexity pushes Peck’s sunny virtuosity into astonishments. She takes a steeplechase of twists and turns at speeds that should blur motion but somehow don’t.
BRIAN SEIBERT

The Berlin Philharmonic entered the pandemic prepared for a pivot to streaming video. Its Digital Concert Hall debuted in 2008 and offers a monthly subscription as well as tickets that grant access for a week, a month or a year, with prices ranging from about $12 to $177.

The orchestra’s February series, “The Golden Twenties,” is the latest reason to visit the platform. Each evening in the five-concert stand focuses on musical trends from Weimar-era Berlin and yields some choice moments, but three are so consistently vivacious, you might even forget that the seats of Philharmonie hall remain empty.

The opening show from the Philharmonic’s music director, Kirill Petrenko, features the world premiere of a critical edition of Weill’s Symphony in One Movement — as well as a riveting account of Stravinsky’s opera-oratorio “Oedipus Rex.” In a concert conducted by Michael Hasel, which evokes the legacy of the Moka Efti nightclub, members of the orchestra also impress in Weill’s “Little Threepenny Music.” And, in the final performance of the series, the conductor Christian Thielemann revels in rarities by Busoni and Hindemith.
SETH COLTER WALLS

After a quiet year, Nashville’s Ryman Auditorium is showing signs of life: Brandi Carlile and crew will take over its hallowed stage on Sunday night at 8 p.m. Eastern time for a performance of the singer-songwriter’s always-rousing folk-rock (with limited in-person attendance). Tickets to the livestream are $25 and available at brandicarlile.veeps.com; a portion of sales will go to local nonprofits supporting music education and artists from marginalized communities.

Make it a double bill by tuning in to a 9 p.m. livestream from the country punk Dwight Yoakam and his band. They will dust off “Buenas Noches From a Lonely Room,” a 1988 album marked by Yoakam’s economical storytelling and lonesome whine. Highlights include the title track, a lovelorn murder ballad, and “Streets of Bakersfield,” a chummy duet with Buck Owens that name-checks the Californian city whose signature crackling country sound Owens helped forge, and from which Yoakam regularly draws. Tickets to the stream are $20 and available at boxoffice.mandolin.com.
OLIVIA HORN

Freedom is in the air, and not just because of warmer weather and vaccinations against Covid-19. Saturday evening is the start of Passover, the festival that celebrates the liberation of the Jews from slavery in ancient Egypt.

On Friday at 4 p.m. Eastern time, the Jewish Museum and the Carnegie Hall Voices of Hope festival will herald the holiday with Freedom Music Jam, a 45-minute recorded concert for children 3 and older that will stream on the museum’s YouTube channel and remain there indefinitely afterward. (Families who R.S.V.P. at thejewishmuseum.org will receive an emailed link to the event.)

The participating musicians comprise some of the most diverse and creative in young people’s entertainment. They include SaulPaul; Pierce Freelon, who appears with Rissi Palmer; 123 Andrés, performing “Boomerang” with Konshens the MC; ShirLaLa; and Shine and the Moonbeams, offering their hit “Bully Bully.” Fittingly, the program is free, and all the songs center on Passover themes like hope, justice, unity and, of course, liberty.
LAUREL GRAEBER