Mario Merz’s sculptural installations look a bit different from some of the austere Minimalist and land art works that form the core of Dia Beacon’s collection. For one thing, Merz’s sculptures use organic materials like fresh fruit, vegetables and twigs rather than the industrial materials like steel. The Merz show, however, artfully connects key 20th-century European movements with American ones, showing how his ideas often overlapped with some of Dia’s long-term stalwarts.

Merz (1925-2003), an Italian artist, started drawing in 1945 while imprisoned for his activities with an antifascist group. In the late ’60s, he became involved with Arte Povera (literally, “poor art”), which championed the use of everyday materials. You can see that in his sculptures using twigs, hay and string. Merz was also interested in ancient and elemental forms like tables and igloos, as well as the Fibonacci sequence, in which each number equals the sum of the two preceding it.

An early igloo, “Is Space Bent or Straight?” (1973) at Dia:Beacon is made of glass propped around a metal armature and has a typewriter with an ad hoc poem sitting in it. Later, larger igloos like “8, 5, 3,” from 1985, include piles of twigs and neon words. “Tavola a spirale (Spiral Table)” (1982) serves as a kind of Fibonacci-inspired banquet with fruit and vegetables displayed alongside a small beeswax violin sculpted by Merz’s wife, the artist Marisa Merz. 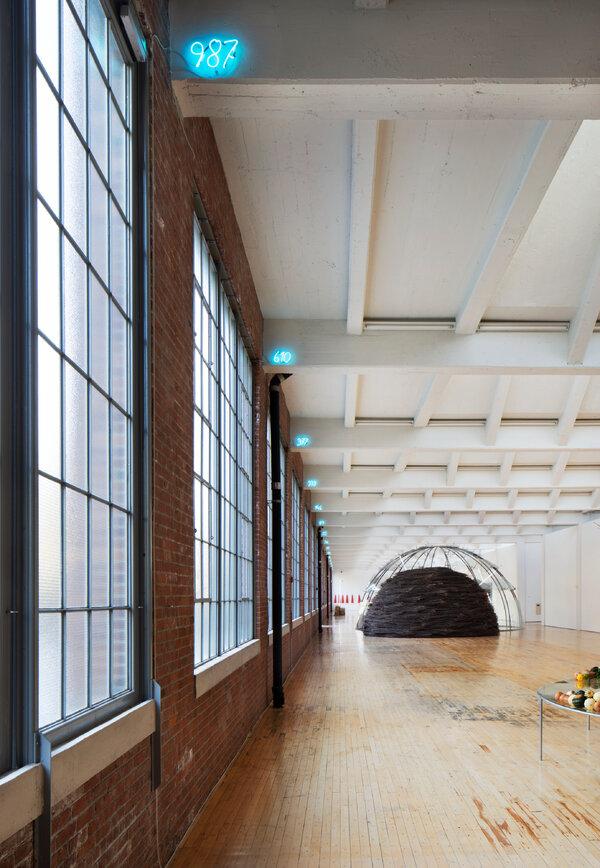 Then there are the numbers. You might almost miss “Progressione di Fibonacci (Fibonacci Progression),” (1979/2019), a series of neon digits displayed on the crossbeams just below the ceiling and heading down the length of the gallery. They are the simplest works in the show but they connect Merz’s practice with other Dia artists — Dan Flavin’s fluorescent sculptures or the rhythm of Carl Craig’s Detroit techno music in the basement — as well as other artists interested in the Fibonacci series like Donald Judd, Dorothea Rockburne and Sol LeWitt. Many artists during this era were obsessed with mathematics, systems, information theory and cybernetics, and making art based on series or permutations. Merz’s take on Fibonacci’s numbers, which stretched into infinity, also suggested a utopian approach, linking art with greater forces, like science, history and the natural world.

“Everybody Dies!,” the latest high-concept group show at the Chinatown gallery Carriage Trade, borrows its title from its central piece, a short video by Nuotama Bodomo, a New York-based Ghanaian filmmaker. In it, four Black children are asked impossible questions on a low-rent game show sponsored by Newport menthol cigarettes. When, inevitably, they answer wrong, they’re hustled through a yawning door marked “DEATH.”

Though it’s only nine minutes long, the video veers between morbid humor and hysterical despair, and the exhibition follows suit. A stack of posters, in an untitled piece by the artist Félix González-Torres, reproduces a 1989 Time magazine pictorial about the epidemic of American gun violence and its disproportionate impact on people of color. (Go ahead and take one — they’re designed to be replenished.)

Nineteenth-century swatches of patterned black fabric for mourning clothes are whimsical; a drawing of John F. Kennedy’s assassination made by the artist John Schabel when he was in the third grade is shocking; and a mock coffin deaccessioned by an Oddfellows’ lodge, in this context, looks comical. A series of prints made by Melchior Grossek in the aftermath of World War I and the 1918 flu pandemic pictures death as sinister but cheerful, amused by his own terrible caprice.

The artist and curator Peter Scott of Carriage Trade began planning “Everybody Dies!” more than a year ago, but it could hardly be more relevant — not only for its focus on mortality and racial injustice, but because it so adeptly evokes a mind unable to grasp what’s right in front of it.

Figurative painting sometimes seems to be everywhere, as its two-decade renaissance shows no signs of abating. Mernet Larsen has been making stylized and mysterious representational paintings since the start of the current wave, but only had her New York gallery debut in 2012 (at age 72). It’s gratifying to see her continue to get her due.

The new works in the current exhibition (which can be viewed in the gallery and online) spring from the Suprematist and Constructivist compositions of the Russian artist El Lissitzky. Ms. Larsen takes Lissitzky’s abstract forms and turns them into realistic paintings filled with blocky, geometric figures set in strange spatial relationships with each other and the world around them. The resulting scenes are cryptic, but also funny (a rooster being handed off to a monk), ominous (a man on a beach with a gun), or cosmic (an astronaut floating in front of a planet). She heightens the sense of eeriness by using a muted color palette and mixing perspectives.

An excellent example, “Intersection (after El Lissitzky)” (2020), depicts a man in a wheelchair walking a dog. The pair is as angular as the sidewalk that simultaneously runs beneath them and juts up as a flat background. From the titular intersection, a more textured scene of a truck moving down a highway and birds flying over a field seems to emerge through refracted rays of light. The man observes it almost as if it were a painting. For the gallery viewer, the whole mundane moment becomes unfamiliar and metaphysical, like a view of reality exploded from within.