Shirley Chisholm stares out from the side of a dozen coffee mugs these days, her epochal glasses, brocade dresses and distinct crown of curls recognizable trademarks of the most regenerative political figure in modern American culture.

As a number of new congresswomen begin to emerge in her image, Ms. Chisholm, who 50 years ago began her service as the first African-American woman in Congress, representing Brooklyn’s 12th District, is enjoying a resurgence of interest 14 years after her death.

The actor Viola Davis is producing and starring in a feature film about her, “The Fighting Shirley Chisholm,” and the congresswoman will be portrayed by the actress Uzo Aduba in the upcoming series “Mrs. America,” which chronicles the movement to ratify the Equal Rights Amendment.

The Shirley Chisholm State Park — the largest state park in New York City — opened July 2 in Brooklyn. The congresswoman will soon be the first female historical figure to have a public monument in Brooklyn. Representative Yvette Clarke, who holds the seat held by Ms. Chisholm, is working to get a statue of her placed in the United States Capitol.

This month, Representative Hakeem Jeffries, another Brooklyn Democrat, had a portrait of her made to hang in the office of the House Democratic Caucus — which he heads — on Capitol Hill. “The social, economic and social-justice fights that Shirley Chisholm once led have sharpened in the Trump era,” Mr. Jeffries said. Those forces have converged, he added, with “the logical attention to her 50th anniversary of becoming the first African-American woman in Congress.” 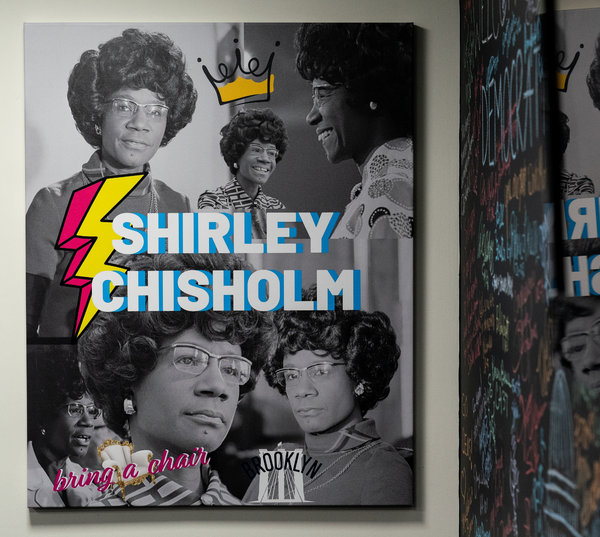 John Stanton, a writer in New Orleans, recently had a replica of the 2008 portrait of Ms. Chisholm that hangs in the Capitol tattooed on his knee. “People want heroes right now,” Mr. Stanton said, “and they’re looking for heroes that aren’t just straight white men.”

Before the feminist movement fueled a slow wave of new women into Congress, Ms. Chisholm was a one-woman precursor to modern progressive politics. A community activist and educator who served briefly in the State Legislature, Ms. Chisholm decided to run for a House seat in 1968, her campaign centered squarely on gender; her primary opponent repeatedly suggested that a man was better suited to represent the area in Washington.

An advocate for the poor and working class, Ms. Chisholm employed a pre-Instagram method of direct engagement, a sound truck that she rolled up to Brooklyn housing projects bellowing, “Ladies and gentlemen, this is fighting Shirley Chisholm coming through.”

As the first African-American woman in Congress, Ms. Chisholm was often frozen out by men of all races and felt alienated by the feminist movement. In a 1974 speech at the University of Missouri, she said: “It is quite understandable why black women in the majority are not interested in walking and picketing a cocktail lounge which historically has refused to open its doors a certain two hours a day when men who have just returned from Wall Street gather in said lounge to exchange bits of business transactions that occurred on the market. This is a middle-class white woman’s issue.” Her efforts took years to be replicated. “You now have 20 black women in Congress,” Ms. Clarke said. “She was the only one.”

In 1972, Ms. Chisholm became the first African-American woman to seek the nomination of a major party for president of the United States. Thinking she could consolidate black, female and working-class voters under her campaign slogan and theme, “Unbought and Unbossed,” she ran up hard against the political realities and institutional sexism and racism of the era.

Ms. Chisholm was initially blocked from a televised debate, was derided by many of her black male colleagues in Congress who thought she had overstepped and was abandoned by white feminists like Gloria Steinem. But her unsuccessful run sealed her legacy as an unapologetic antiwar, feminist and working-class advocate, work she pursued until retiring from Congress in 1983. (In a twist, she also formed a genuine friendship with a presidential opponent, George Wallace, the former pro-segregationist governor of Alabama, and visited him in the hospital after he was shot.)

“A number of scholars have been doing a lot of work to expand the discourse on Shirley Chisholm for about six years knowing that there would be the 50th anniversary of her election to Congress,” said Zinga A. Fraser, director of the Shirley Chisholm Project on Brooklyn Women’s Activism at Brooklyn College. Still, “Hillary Clinton did not evoke her during her campaign,” Ms. Fraser said. “Neither did Barack Obama.”

In popular culture and politics, the fascination with Ms. Chisholm went into a period of hibernation after she left Congress. “Shirley Chisholm had just been erased and forgotten,” said Barbara Winslow, a professor emeritus at Brooklyn College and founder of the Shirley Chisholm Project. The rise of progressive politics on the left and the wave of women officeholders, including the first black and Muslim and Native American representatives from their districts, have combined to give Ms. Chisholm new cultural consideration.

Her speeches were of particular interest to Alphonso David, who is counsel to Gov. Andrew Cuomo of New York and who sponsored the exhibit honoring Ms. Chisholm in a state office building. “They defined empowerment,” he said, noting remarks at Howard University in 1969 that resonate today. She said, “Just as the picket line and the lunch counter demonstrations and the boycotts were dramatic and effective weapons of protest for the civil rights movement, the polling place is the new phase in the new thrust of the black man’s bid for equality of opportunity.”

Representative Ayanna Pressley, Democrat of Massachusetts, was given Ms. Chisholm’s office in the Longworth House Office Building by her colleague, Representative Katie Hill, who had drawn it in the office lottery. “I feel a soul tie to Shirley Chisholm,” Ms. Pressley said. “The vibe of her office fills me with the courage to boldly lead, boldly legislate, and to never forget those who sent me here.” Ms. Pressley was one of many women who evoked Ms. Chisholm during their 2018 congressional campaigns.

The former Representative Charles Rangel, who served from 1971 to 2017, said Ms. Chisholm’s “newly found recognition” was “fully due to this new women’s movement.” He added, “Shirley did not get this type of support from men or women at the time. We always wait until somebody dies to do what we wish we had done while they were alive.”

Jennifer Steinhauer is a Times reporter focused on veterans’ issues and the author of the forthcoming book “The Firsts,” a chronicle of the first year of the women of the 116th Congress.

The Times is committed to publishing a diversity of letters to the editor. We’d like to hear what you think about this or any of our articles. Here are some tips. And here's our email: [email protected].

An earlier version of this article misstated the district Ms. Chisholm represented. It was the 12th, not the ninth.