The United States’ victorious women’s national soccer team rolled up Broadway on Wednesday, cheered by thousands and showered in confetti. The team, which defeated the Netherlands, 2-0, on Sunday in the Women’s World Cup final in Lyon, France, traversed the Canyon of Heroes, a stretch of Broadway from Battery Park to City Hall.

The parade is being televised on the local networks in New York; on Fox Sports 2 and ESPNU nationally; and streaming on the ESPN app. It was followed by a ceremony at City Hall hosted by Mayor Bill de Blasio.

Bagpipers, motorcyclists and rows of police officers joined the floats of soccer stars in the parade. The mayor waved an American flag surrounded by members of the team wearing black “world champion” shirts and their winners’ medals.

Governor Andrew Cuomo was on a separate players’ float, and he, Crystal Dunn, Tobin Heath, and other players were seen chanting “equal pay.” The team’s players have objected that the American men’s team is paid more, though its performances are significantly weaker.

A poster on that float read: “Parades are cool; equal pay is cooler.”

“I’ve got 22 of the best, bestest friends right behind me,” Carli Lloyd said at the City Hall ceremony. Her speech followed a lengthy drum performance, the national anthem, the presentation of colors, introductions, and speeches by Mayor de Blasio; his wife, Chirlane McCray; and Carlos Cordeiro, the president of U.S. Soccer, who was serenaded by “equal pay” chants by many in the crowd.

Megan Rapinoe, in an interview on CNN on Tuesday night, said she and teammates wanted to celebrate their title in part by talking to leaders in Congress and elsewhere about the issues they’ve been vocal about throughout their run. She said she was not interested, however, in going to the White House, because she didn’t want President Trump to piggyback on their platform. 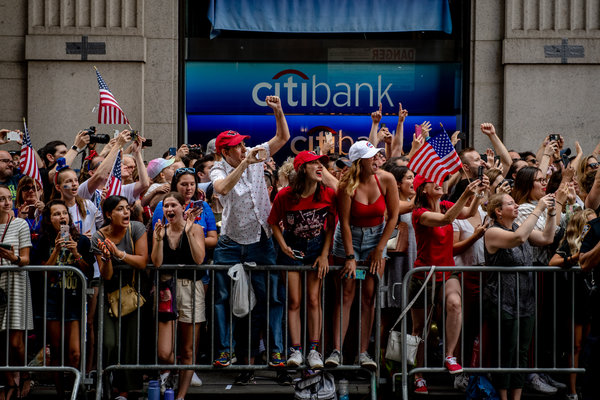 Rapinoe said the “equal pay” chant from the crowd at the end of the final solidified the win as a transcendent moment. She said that beyond pay, the issue was about investing equally into the men’s and women’s games.

“Until we have equal investment and care and thought and brainpower put on both sides, then we don’t know what our potential is. I mean right now I would say that we’re doing pretty good basically creating this entire business without being compensated substantially.”

The Canyon of Heroes has been used to celebrate many people and events, including the Apollo 11 astronauts and the completion of the Brooklyn Bridge. This is the second time the women’s national team has received the honor; the 2015 squad was also feted, a first for a women’s team.

It has been a nonstop party for the team since their victory. Champagne flowed in the locker room, and celebrations have continued in the streets of France, on planes and buses, and now back in the United States. Several players were seen swigging from Champagne bottles during the parade.