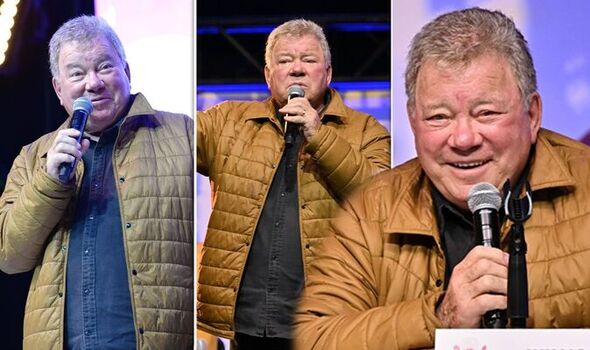 The actor looked youthful at ComicCon in Los Angeles, where he delivered a speech to a lively crowd

William Shatner looked youthful and appeared to be in high spirits at the event last weekend.

For the occasion, the 91-year-old opted for casual attire consisting of jeans, a black button-up shirt and a mustard coat.

During the event, he took part in the main stage panel, signed autographs for fans and participated in photo opportunities.

The actor is best known for his his role of James T. Kirk in the Star Trek: The Original Series as well as the first seven films.

His appearance comes after his ex co-star George Takei took a swipe at him as he addressed their feud on The Graham Norton Show last week.

Speaking to the host, he said: “You are the last chat show host to be allowed to ask that question as it has become so tiresome to talk about.

Following other co-star’s criticism about his alleged behaviour on the 1960s sci-fi set, William said it was all for publicity.

He told The Times: “George has never stopped blackening my name.

“These people are bitter and embittered. I have run out of patience with them. Why give credence to people consumed by envy and hate.

“I began to understand that they were doing it for publicity.”

Star of the show

The actor is best known for playing James T. Kirk in the Star Trek: The Original Series as well as the first seven films

William Shatner and George Takei are no longer friends, with the latter recently branding him a ‘cantankerous old man’