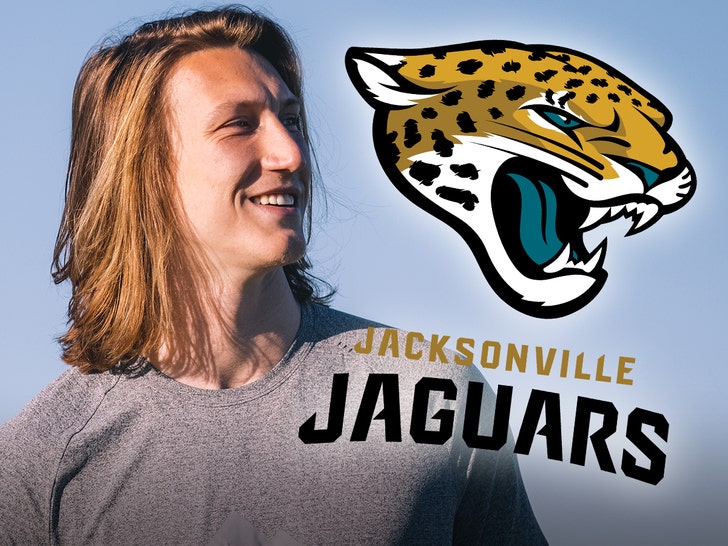 9:30 AM PT — The man of the hour has officially touched down in Jacksonville … and he’s got a HUGE smile on his face.

Lawrence arrived at his new home in style — wearing a blue suit as he hopped off the private jet Friday morning … shaking hands with those ready to welcome him at the team facility.

6:02 PM PT — The first five picks have been announced … with BYU QB Zach Wilson going #2 to the N.Y. Jets, NDSU QB Trey Lance to the San Francisco 49ers at #3, Florida TB Kyle Pitts to the Atlanta Falcons at #4 … and LSU WR Ja’Marr Chase rounding out the top 5 to the Cincinnati Bengals.

The pick is in … and the Jacksonville Jaguars have officially taken Clemson superstar QB Trevor Lawrence first overall in the 2021 NFL Draft!!

The selection should surprise literally no one — the 21-year-old has been at the top of the draft boards ever since he declared for the draft in January.

Lawrence — who decided to spend his big moment with his fam in South Carolina — was visibly pleased to hear his name called Thursday night … hugging his new wife, Marissa Mowry as Roger Goodell announced the pick.

Lawrence was as good as it gets for the Tigers — winning a national title as a true freshman in 2018.

He also led Clemson to the championship game in 2020, but fell to Joe Burrow and the LSU Tigers … marking his first collegiate loss. In fact, dating back to his high school football days, Lawrence has yet to lose a regular-season game.

Lawrence finished his college career with an insane 34-2 record — the most wins in school history.

Unfortunately, that winning streak is most likely coming to an end during his rookie season — the Jags were pretty bad in 2020 with a 1-15 record.

But, now, JAX has college football coaching legend Urban Meyer on board … and he’s teaming up with the Heisman finalist to change the culture within the organization.

Now that the first domino has fallen, the next question is — where the heck are the rest of the QBs in the draft going??