Two years since marrying, television personalities Sylvia Jeffreys and Peter Stefanovic have confirmed they will soon welcome a baby son into the world.

Jeffreys, 33, and Stefanovic, 37, who met while working together at Channel Nine, have been keen to start a family since their high-profile wedding in Kangaroo Valley in 2017. 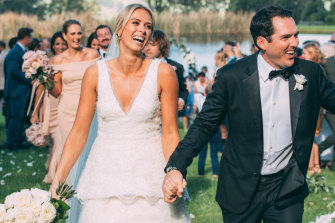 Newsreader Sylvia Jeffreys at her wedding to Peter Stefanovic.

"We couldn’t possibly be happier or more excited to meet our baby boy and we’re hugely grateful for the all the love that’s coming our way," Jeffreys told PS on Monday night.

The news is a welcome distraction from the headlines which have engulfed the couple's respective careers over recent months; both of them falling victim to the headline-making purge of talent on Nine's flagship breakfast show Today in the wake of Peter Stefanovic's older brother Karl's departure.

But it was the younger Stefanovic who landed in hot water during last year’s infamous Ubergate scandal when a conversation with his brother complaining about colleagues and management at Nine was leaked to the media and his contract at Nine was not renewed.

However the soon-to-be first time father made his TV comeback as co-host of rival Sky News' First Edition, alongside Laura Jayes in May, while his wife remained at Nine and recently launched a news bulletin created specifically for Facebook.

The pair have been one of Australian TV's golden couples, having met while hosting the weekend Today show over the Christmas period about six years ago and soon began dating.

In 2016 Jeffreys revealed the early days of their courtship during an interview with the Sun Herald: "We sort of bumped into each other in a car park at Channel Nine one day before we started hosting together … I think it was pretty obvious, certainly was to everyone around me – my mum and my sister, in particular, knew that there was something there."