Tom Holland and Zendaya have officially entered the “publicly flirting on social media” phase of their relationship.

Earlier this month, Zendaya walked the red carpet at the Venice Film Festival for the premiere of her new movie, Dune. She walked said red carpet in a nude Balmain gown that should have come with its own fire extinguisher because, well, just look at it:

You don’t just wear a dress like this and not document the occasion, so, this weekend, Zendaya shared a few choice pictures of the lewk on IG. “I know I’m late to posting these, it’s been a long week but one of the most special weeks,” she captioned the post.

Tom Holland joined the rest of the world in appreciating the post/thinking Zendaya looked like a three-alarm fire. And he slid into the post’s comments to express just what he thought of the picture (/presumably of Zendaya in general, because he’s only human, after all): “🔥🔥🔥.” 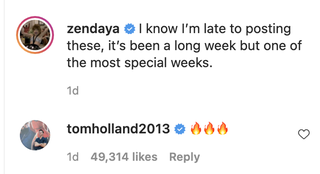 A couple of days before the Dune premiere, Tom took to Instagram to share a sweet tribute for his GF’s 25th birthday.

To drive the Spider-Man theme home a little further, Tom opted for a behind-the-scenes picture of himself and Zendaya on set. Zendaya is the photographer in the old school mirror selfie (which she clearly snapped not with a phone but with an actual camera) and it seems to have been taken when Tom was filming the aftermath of a fight scene, since he’s in his Spidey costume and sporting some scrapes on his face, courtesy of the Marvel/Sony makeup department.

Zendaya clearly appreciated the gesture, and commented, “calling now” with a heart emoji when she saw the post.

If anyone out there is looking for tips on how to keep the romance alive digitally when you’re long distance, follow Tom and Zendaya and take notes.