So Tom Gleeson achieved his goal of upsetting the TV Week Logies and taking out the big gong with him, and it's all we've been hearing about for a week now. 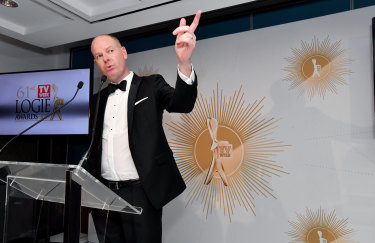 Still on a high – Tom Gleeson addresses the media room at the Logies following his Gold Logie win.Credit:AAP

So much for the Logies being irrelevant.

Far from killing off the annual television love-in, Gleeson has actually injected more life into the Logies than it has had in years.

However I'm not quite convinced he was really expecting the outcome he got, especially judging by his demeanour following last Sunday's festivities.

When PS crossed Gleeson's path he looked far from being happy with himself – although perhaps he was just completely exhausted and emotionally spent after his mammoth campaign to claim the Gold.

Sometimes comics appear to be the unhappiest people in the room, as Gleeson did late on Sunday night.

I was right behind the comedian as he made his way out of The Star's ballroom, having done his round of post-award press conferences and had his Gold Logie engraved and polished.

But far from brandishing his prized Gold Logie for all the world to see, it was still in its box, discreetly tucked under his arm as we got in the lift.

Nor was Gleeson offering any witty retorts when passersby shot a few friendly barbs his way.

To be honest, Gleeson looked forlorn. Staring at the floor of the elevator he was in no mood for making eye contact, let alone any friendly chit-chat as the endless congratulatory comments flowed around him.

Indeed, it was getting a little awkward for all of us as we made our way up to Nineteen for Nine's after party.

Then, well before we reached the party venue, Gleeson got out a few floors before us, cutting a lonely figure as he made his way to his room. He was not to be seen again that night. 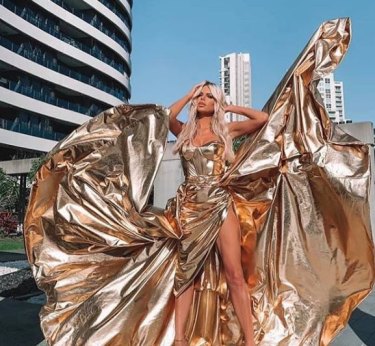 Sophie Monk in a Jason Grech gown for the 2019 Logies.Credit:Instagram/@sophiemonk

Which is odd, because a Gold Logie usually guarantees one entree into any after party, with rival networks happy to dispense with commercial territorialism for one night to celebrate the industry collectively.

Gleeson would have undoubtedly been welcome at Nine's party if he had stayed in the lift. Even Karl Stefanovic, the subject of Gleeson's many pointed barbs in his hilariously cutting opening, told me he would have loved to see Gleeson to celebrate with him. 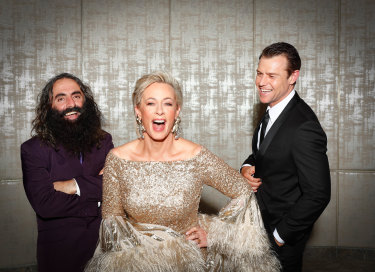 But such hero status can be fleeting, as Jamie Durie, a former Logie winner himself, discovered when he was barred from entering Nine's after party. Durie is now signed to rival Seven.

As for the tediously predictable chorus of media commentators saying the Logies was now officially dead – what a bunch of party poopers. They managed to conveniently overlook the fact the Logies still pulled in an impressive audience of 866,000 viewers on Sunday night, up on 2018’s 851,000. That's over several hours of live television and the telecast dominated the ratings across all the networks.

Social media was full of commentary from the arm-chair brigade, again much of it from mealy-mouthed denizens of Twitter who can't get an invitation to the Logies but feel compelled to sledge its very existence.

But in a world where culture is becoming as globalised as fast fashion chains and hamburgers, the Logies represents one of the last vestiges of celebrating Australian stories – whether they be the ones played out on the small screen in excellent dramas like Mystery Road or Bloom, or those being lived by the famous faces who gather in the room year after year. 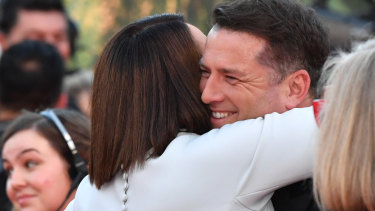 Where else would you get former Today co-hosts Karl Stefanovic and Lisa Wilkinson in the same vicinity – albeit amid a particularly frosty atmosphere. And there they were,  sitting on rival tables with equally beaming smiles despite the carnage they both endured on Today. 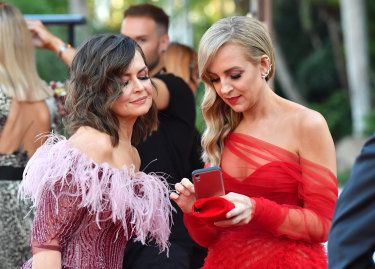 Selfie check: Lisa Wilkinson with Carrie Bickmore on the red carpet at this year’s Logies.Credit:AAP

And when else do you get to witness the "nobodies" of Australian TV, such as the Married At First Sight contestants, competing with the industry, ahem, royalty Sunrise's David Koch and Samantha Armytage, for camera time?

And then there was the "tired and emotional" lady from one of the year's biggest reality TV shows being carried out of an after party by a couple of her co-stars. It would be unfair to name her, she's unlikely to be on air again and she possibly could have had a delayed allergic reaction to the sixth espresso martini she had just knocked back.

The Logies is about celebrating our television industry, our stories, our accents and our stars – in what ever form they come in, and with a healthy dose of irreverence. It's the Australian way.

Long may it reign.