Prince Harry’s visit to the U.K. is getting closer as the feud between Prince William and his brother heats up again. Over the past few days, The London Times has published excerpts from Robert Lacey’s new book, “Battle of Brothers: William and Harry – The Inside Story of a Family in Tumult.” The latest story from The Times revealed one of Prince William and Kate Middleton’s biggest fears about Harry when he came for Prince Philip’s funeral. Spoiler alert: It’s really sad.

According to Lacey’s latest book excerpt, anger within the royal family “ran deep” at Prince Philip’s funeral. Vanity Fair reported that family members put their feelings aside for the sake of Queen Elizabeth. Still, a family friend told the outlet, “William and other members of the family have some very strong feelings about some of the things Harry and Meghan said on Oprah and things need to be talked through, but this was not the occasion and everyone respected that. It’s going to take more than a wake to sort things out, but this is hopefully a start.”

Based on the news reports coming out of London this week, Harry may be in for a rough time when he visits the U.K. to honor Princess Diana next week. Keep scrolling to find out why William and Kate feared Harry at the funeral. 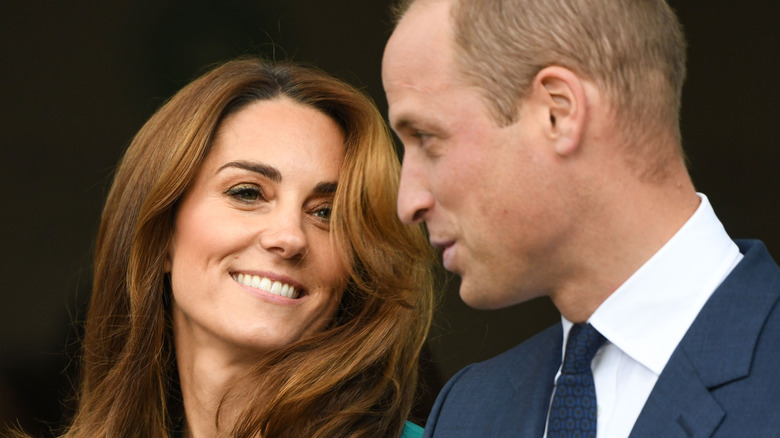 According to Robert Lacey’s latest book excerpt in The London Times, Prince William and Kate Middleton feared Prince Harry might leak their family conversations to the media. There was no two-hour family conference after Prince Philip’s funeral, which contrasts all media reports from the day. Lacey noted in the “Battle of Brothers” book the only time the brothers spoke to each other was when they walked back to the castle. The family members went their separate ways after the service, which is so sad!

According to “Battle of Brothers: William and Harry – The Inside Story of a Family in Tumult,” Lacey wrote, “They told friends that they could see no point in talking to Harry, since any discussion of substance would go straight back to Meghan to be leaked out via Oprah or some other tentacle of the Sussex network that had not stopped spreading stories in the weeks since the interview that the couple’s friends had promised would be their final word.”

You can’t blame William and Kate for fearing a media leak. According to Vanity Fair, after Harry and Meghan’s explosive interview with Oprah Winfrey, the thing that upset William the most was the post-interview leak to Gayle King. A friend of the royal family told Vanity Fair, “Harry was out in the cold after Oprah and then when details of private family conversations were leaked to Gayle King it was the final straw.”