Home » Celebrities » Singer Jeremih is battling COVID-19 and is not doing well, according to 50 Cent

50 Cent later revealed that the Don’t Tell ‘Em singer is suffering from COVID-19.

Hitmaka, a music producer and executive, asked supporters for prayers with permission from his mother.

“I need everyone to pray for my brother @jeremih. This message is posted with his mother’s blessings,” Hitmaka wrote in the caption for a photo of the 33-year-old singer.

Hitmaka took to his Instagram stories to add more context but did not elaborate on Jeremih’s condition.

“My dawg changed my life. He gone pull thru. Pray for @jeremih,” Hitmaka wrote on his story.

“We need that energy [prayer emoji]… Pray for my brother. He gone shake back @jeremih,” Hitmaka added in a subsequent Instagram story.

“Pray for my boy @jeremih,” 50 Cent wrote in a caption of a photo of the two recording artists. “he’s not doing good this covid shit is real. [Prayer Emoji].” 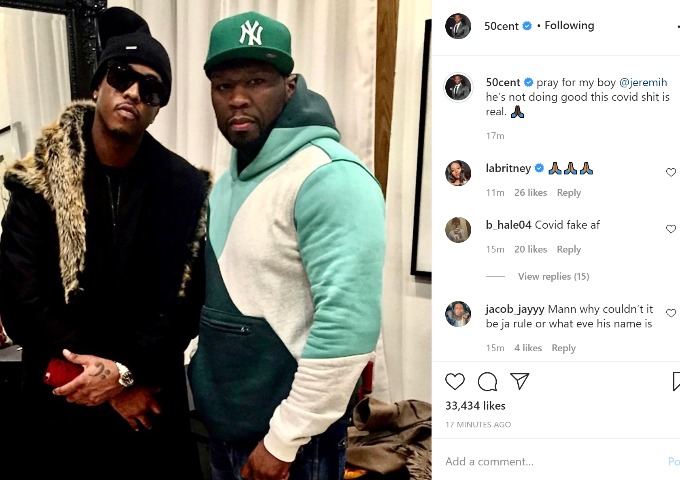 Unconfirmed reports say that Jeremih is in the ICU battling COVID-19. While the seriousness of his condition has yet to be confirmed, several sources report that he is in serious condition.

Chance the Rapper offered his support and asked fans for prayers on Twitter.

“Please if you can take a second to pray for my friend Jeremih, he is like a brother to me and he’s ill right now. I believe in the healing power of Jesus so if you can for me please please say a prayer over him,” posted Chance the Rapper.

Celebrities such as Tank, Eric Bellinger, Gloria Velez, Twista, and many more offered their support after Hitmaka revealed Jeremih’s predicament.

Fans of the singer reacted to the news with many expressing frustration about the secrecy of his health status.

One person tweeted the following, “Jeremih is a celebrity, if it is a private matter it should have been left as that. Telling people to pray without giving a reason causes nothing but worry.”

This news about Jeremih follows the uptick in the number of COVID-19 diagnoses and hospitalizations in the United States.

Jeremih has one million followers on Instagram but was last active on the social media platform in July.

The 33-year-old singer is best known for hit records Birthday Sex, Don’t Tell ‘Em, and Down on Me. He has released four studio albums and has sold millions of records. He briefly appeared on Love and Hip Hop: Atlanta with his friend and collaborator Hitmaka.