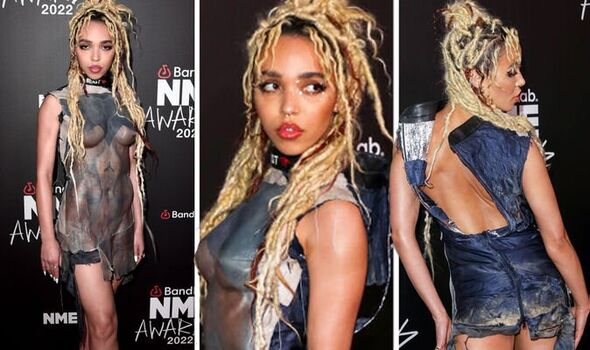 Singer and musician FKA Twigs braved the cold in a completely sheer grey dress on Wednesday night, leaving absolutely nothing to the imagination. The risqué garment was in a ripped, frayed style and featured an opaque panel over the top of her chest in dark grey.

But underneath that, all the material was completely see-through as it cascaded down her toned body.

The daring asymmetrical dress cut off above the knee and Twigs paired it with grey heeled sandals.

Around her neck was a choker with the word “beast” emblazoned on it.

Tears in the Club hitmaker Twigs picked up the coveted Godlike Genius Award at the NME bash.

The gong has previously been won by stars including Liam Gallagher, Emily Eavis and Pet Shop Boys.

For her outstanding contribution to music, the 34-year-old became the youngest ever recipient of the award.

“What an absolute honour to have won the NME Godlike Genius Award,” said Twigs. “To see my name amongst the iconic likes of The Clash, The Cure and Blondie is unreal!

“I am so proud to be the first Black female artist to have been honoured, still baby-faced, and inspired as hell. Here’s to the next decade of making art and music.

“Thank you to the heavens and back to everyone who has helped me make my dreams come true.”

Twigs, who previously dated Batman star Robert Pattinson, recently stunned her fans as she revealed her past life as a backing dancer for Peter Andre.

An unveiled photo showed her posing with Pete and two of his children, Princess, 14, and Junior, 16, who he shares with ex-wife Katie Price.

“I think it’s iconic – I wasn’t sure I was an icon before [seeing the photo] but I’m sure now,” she joked to NME.

“I’ve hugged Junior and Princess. Has Dua Lipa done that? Has The Weeknd? Has Post Malone?

The star, whose real name is Tahliah Debrett Barnett, has also performed as a backing dancer for Jessie J, Kylie Minogue and Ed Sheeran before embarking on her successful solo career.

She has previously revealed the funny story behind her stage name – she was nicknamed ’Twigs’ because of how her bones cracked.

But another artist was using Twigs as their stage name, so she changed her moniker to have FKA in front of it to stand for ‘formerly known as’.

Twigs tweeted in 2014: “I want to clarify that twigs is not a character that ive created, twigs and tahliah are one and the same.