WIMBLEDON, England — It will be Serena Williams versus Simona Halep in the Wimbledon final on Saturday.

Halep will be trying to win her first Wimbledon women’s singles title. Williams will be chasing her eighth, which would also tie the record of 24 Grand Slam singles title held by Margaret Court.

Williams, 37, played one of her finest matches of this often-frustrating season, outplaying and overpowering Barbora Strycova, 6-1, 6-2, in 59 minutes.

Williams has yet to win a title since she returned to the tour in March 2018 after giving birth to a daughter, Olympia.

But she is now into her third Grand Slam final since her comeback after losing last year to Angelique Kerber at Wimbledon and to Naomi Osaka at the United States Open.

But she has rarely hit the ball as cleanly and convincingly under pressure since her return to competition as she did against Strycova, a fiery and resourceful Czech who was playing in her first Grand Slam singles semifinal at age 33. 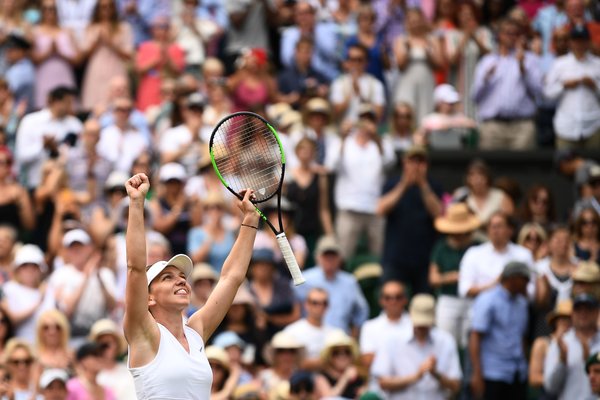 Strycova, once in the top 20 in singles and one of the world’s best doubles players, has a big bag of tennis tricks. She tried many of them against Williams without success on Thursday as Williams chased down drop shots, bent low to hit winners off crisply sliced returns and was generally overwhelming.

In four singles matches against Williams, Strycova has yet to win a set.

Halep’s match with Svitolina was full of extended rallies, but Halep’s consistency, marvelous two-handed backhand and deep focus made the difference.

Svitolina, who was playing in her first Grand Slam singles semifinal, and Halep have similar counterpunching styles. Both are fast with balanced baseline games. Svitolina had won four of their seven previous matches, with Halep winning their most recent duel: a draining three-setter in the semifinals in Doha this year.

But Halep fought her way through the tight and tense early games and then consistently found a higher gear.

“It’s one of the best moments of my life,” Halep said.

Halep, a former No. 1 and French Open champion, has now reached the finals of three different Grand Slam tournaments: the French Open, the Australian Open and Wimbledon. Svitolina’s most significant victory came last season when she won the year-end WTA Finals in Singapore.

“I was nervous, but I think it was the same as in some other matches, like big matches,” Svitolina said. “I played a few I would say. I didn’t play as many as probably she did because she won a Grand Slam, so she knows how it feels to achieve something major in your career. I don’t know if it’s lack of experience a little bit today, but I think she played unbelievable today. She was moving really good and striking the ball perfectly.”

Halep, seeded seventh, does look fresh in the legs and in the mind at Wimbledon this year. After a three-set tussle with her Romanian compatriot Mihaela Buzarnescu in the second round, she has won her last four matches in straight sets.

She dealt the former No. 1 Victoria Azarenka a lopsided defeat in the third round, stopped the 15-year-old American Coco Gauff’s run in the fourth round and defeated Zhang Shuai of China in the quarterfinals.

In this form and mood, she could pose a threat to Williams in Saturday’s final. Williams was edgy in her two major finals last year as she chased her 24th singles title. But she has a 9-1 record against Halep and won their most recent encounter, beating Halep in three sets in the round of 16 of this year’s Australian Open.