A different perspective. Scooter Braun reposted messages of support after Taylor Swift slammed him for buying her former label, Big Machine Records, and her master recordings. 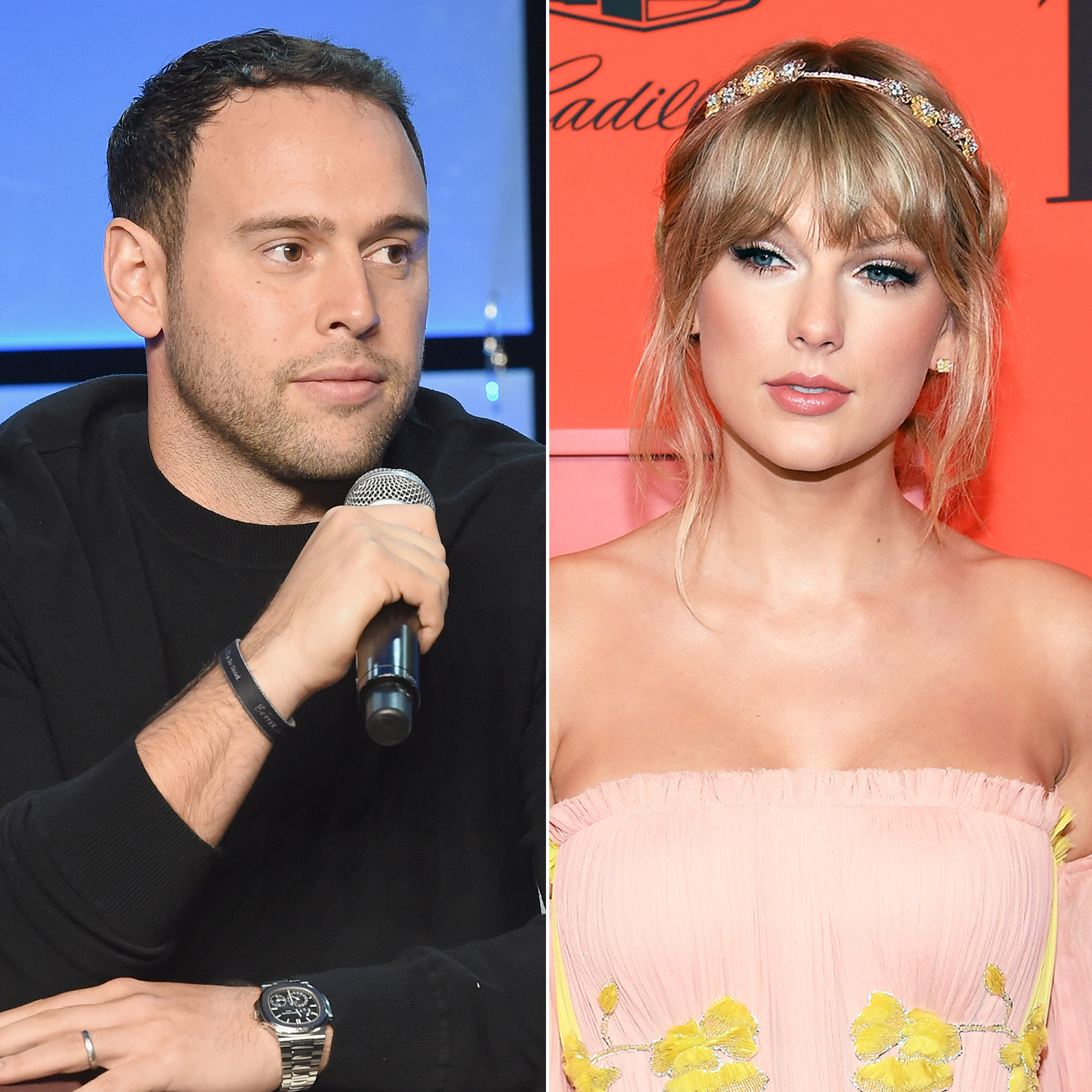 Several of the talent manager’s friends took to their Instagram Stories on Monday, July 1, to side with him amid the drama, and he shared them on his own account. The first message, from a woman named Alex Smith, read, “If there’s one thing I can’t stand, it’s a bully. And I can tell you, from my experience, Scooter Braun is definitely NOT a bully. A shrewd businessman and champion of musical talent yes, but definitely not a bully!”

“Having known him since 2004 and worked with him in a musician/manager capacity in the past, I can say he was nothing but empowering and supportive,” Smith’s post continued. “To hear Taylor Swift impugn his character, painting him as a sexist bully is almost laughable. In that industry, as in most industries, there are their fair share of sexists and bullies but Scooter is neither. Scoot doesn’t need my defense lol but, as I said, I can’t stand a bully.” 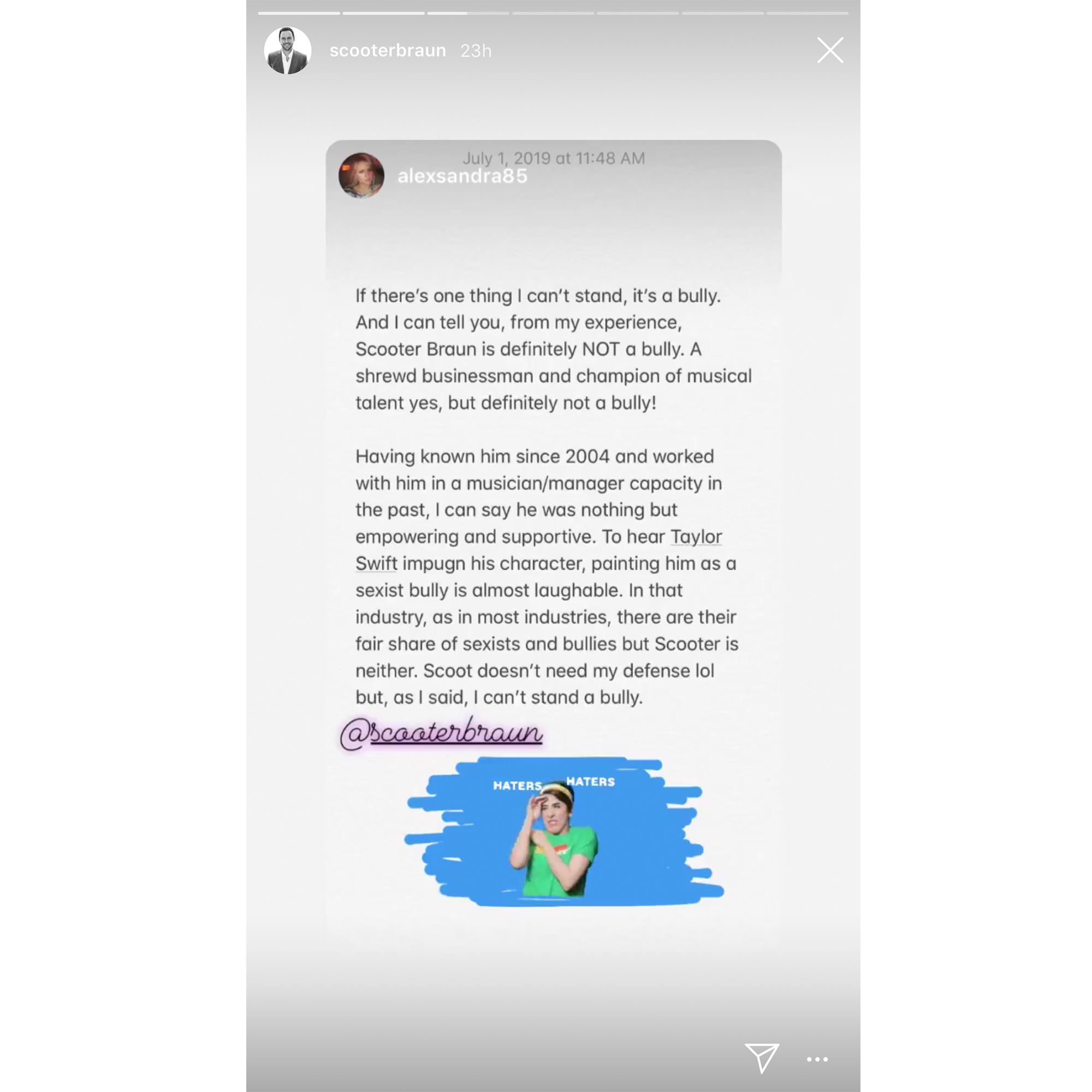 The second message expressed a similar sentiment, with a woman named Brit Smith writing in part, “After reading Taylor Swift’s message tearing apart the character of Scooter Braun, I felt compelled to speak up as many of his friends have. … Scooter, we know and love you for the real man you are.”

The final post that Braun reshared, by a man named David Appleton, read, “My brother @scooterbraun is One of the most loving and loyal friends that I’ve ever had. It was hard seeing some people try to discredit his character the past 24hrs, knowing how truly honorable this man is, but the truth always comes to light.” 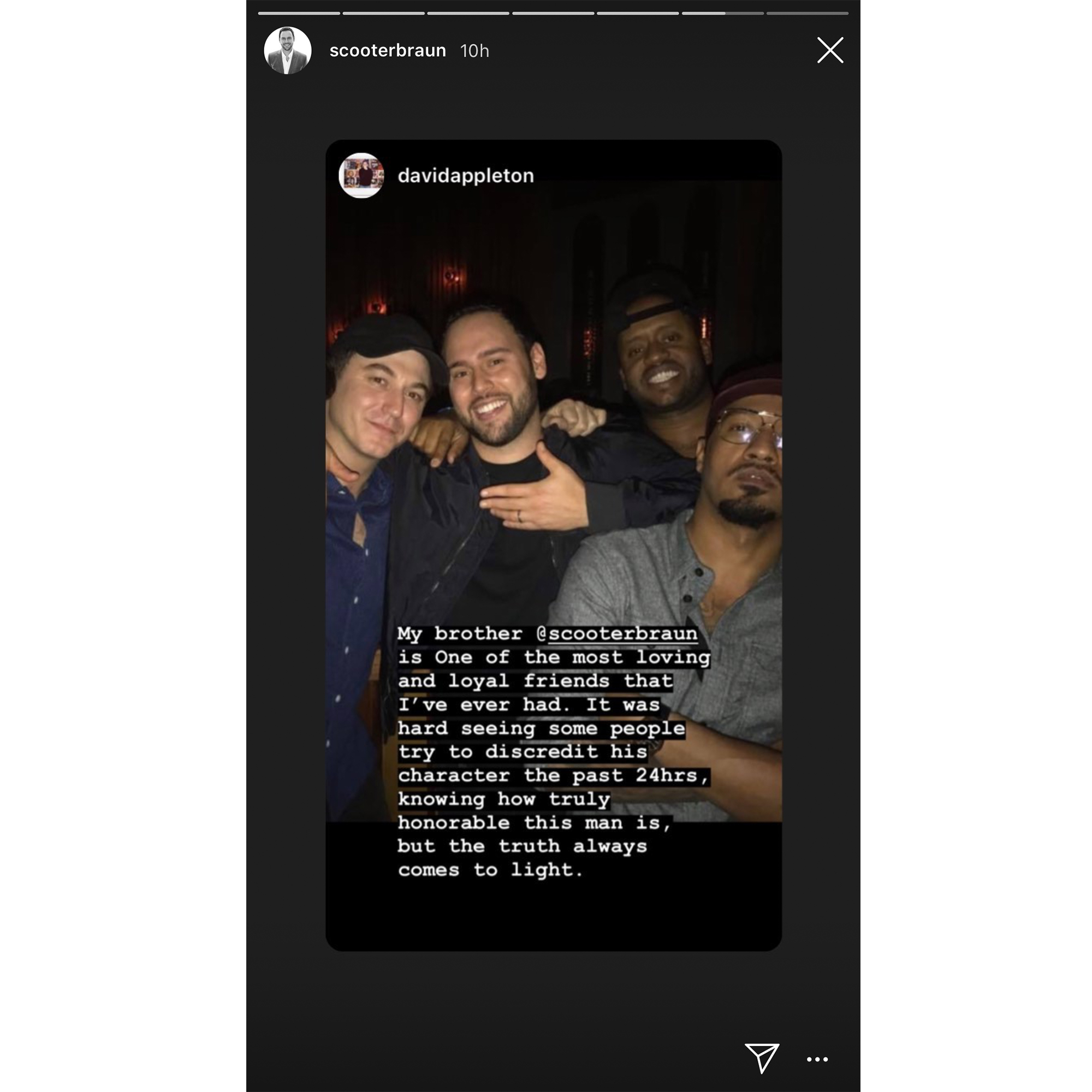 The businessman’s reposts are likely the only way he will publicly acknowledge his feud with Swift, 29. A source told Us Weekly exclusively on Monday that Braun is “open to having a private conversation with Taylor to clear up everything that went down … but he has no intention of releasing a formal statement and blowing up the situation even more than it already has been.” The source noted, “This is between Scooter and Taylor, not the world.”

After news broke on Sunday, June 30, that Braun had purchased Big Machine for a reported $300 million, Swift claimed in a lengthy Tumblr post that she found out “as it was announced to the world.” She went on to call the situation her “worst case scenario” and accused Braun, whose clients include her longtime nemesis Kanye West and Justin Bieber, of “incessant, manipulative bullying.”

The “Me!” singer left Big Machine in 2018 after 13 years to sign with Republic Records and Universal Music Group.