Ryan Reynolds said he tries to ‘be as present as possible’ with his three daughters, sharing that they ‘have courage under fire.’

Ryan Reynolds, 44, loves being a “girl dad”! The Deadpool actor opened up about life with his wife Blake Lively, 33, and their three daughters James, 5, Inez, 4, and Betty, 1. “I love being a girl dad,” he said in a virtual interview with Access Hollywood with “special correspondents” Gia, 10, and Dominic, 7, who are the kids of host Mario Lopez. “I have three daughters, which I never in a million years would’ve imagined. I come from all boys.”

“I have three older brothers — I’m the youngest of four boys, so for me to have three daughters has just been such a ride, and I love every second of it,” the Vancouver native added. Reflecting on his daughters, he shared that they have an extremely special bond. “No joke, they’re like the most capable people I know…If anything got crazy or scary in my life, they’re the first people I would lean on because they have wisdom and strength and they’re calm under fire. They have courage under fire,” he said.

Ryan’s interview with the youngsters — and perhaps future TV hosts — was in promotion of his new animated flick The Croods: A New Age. Gia and Dominic were so cute as they asked all the hard hitting questions, including what makes a good dad. “I try to be as present as possible,” Ryan explained to the siblings, who also share little brother Santino, 1. “We don’t split up — like I shoot movies and my wife shoots movies, and we go travel all over the place and we just all go together. I think that’s been the best part of it is that we really don’t spend a lot of time apart. I get to spend a lot of time with my girls.” 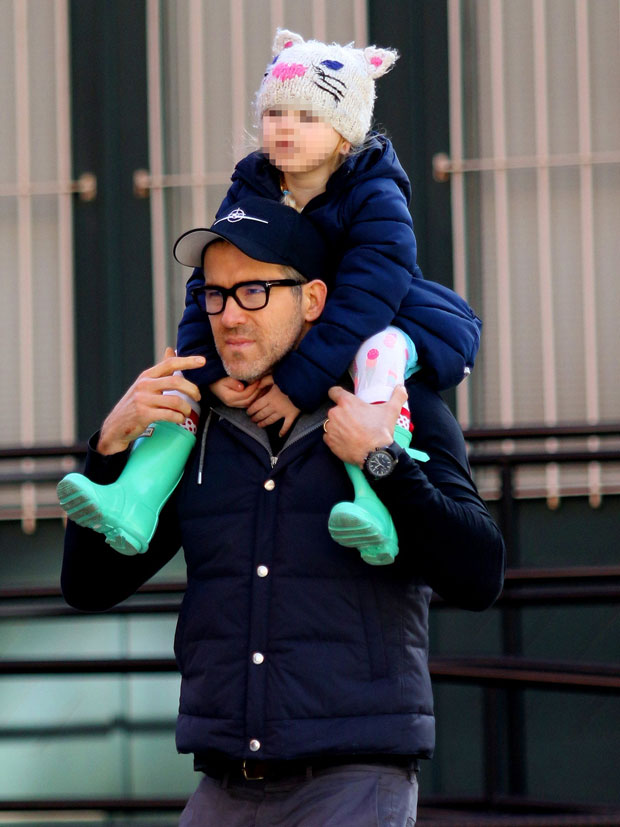 Recently, Blake joined Ryan in Georgia where he was filming Netflix movie Red Notice with Gal Gadot, 35. The Gossip Girl alum went all out for an at-home birthday celebration, surprising her husband with not just one of his favorite desserts, but four — and we aren’t talking about cake. “1) Who is the lost soul that selects birthday PIE. 2) What ANIMAL eats their cake (pie) without first blowing out the candles @vancityreynolds that’s who,” she joked, sharing a hilarious photo of Ryan blowing out candles on a lit pie. Notably, Ryan is a self-proclaimed pie connoisseur — once even admitting to sneaking from his favorite spot in Vancouver, Canada across the U.S. border.

“Happy Birthday. I honestly can’t believe we’re still married,” Blake also joked in her caption. Despite their A-List status in Hollywood, Blake and Ryan have kept life with their daughters fairly under wraps — including Betty’s name. Friend Taylor Swift, 30, had the honor of unveiling the 1-year-olds name via her album Folklore, in which a trio of songs revolve around a teenage love triangle in which the characters are named James, Inez and Betty. “I named all the characters in this story after my friend’s kids, and I hope you like it,” Taylor coyly said while introducing “Betty” on a country radio station.