Harry & Meghan has been getting tongues wagging ever since it landed on Netflix last Thursday with the series featuring Prince Harry and Meghan Markle telling their “side of the story”.

The docuseries uses archival footage as well as personal photos shared by the couple with Netflix, and one set came from within the Queen’s most private of residences. One of the photos shared by the couple appears to take place inside Her Majesty’s Welsh Cottage, located inside Windsor. The cottage was a childhood favourite of the late monarch, who spent time there playing with Princess Margaret.

The cottage, which is known as Y Bwthyn Bach, was a birthday present for the then six-year-old Princess Elizabeth.

VIDEO: Meghan Markle and Prince Harry’s engagement interview when they thought cameras were off

The property has never been open to the general public, and has only been rarely seen, with Andrew Marr once having interviewed Princess Beatrice inside.

The photo shared by the Sussexes shows them drinking from an ornate tea set and giggling while sat by one of the pristine windows.

It’s not known when the photo of the Sussexes was taken. 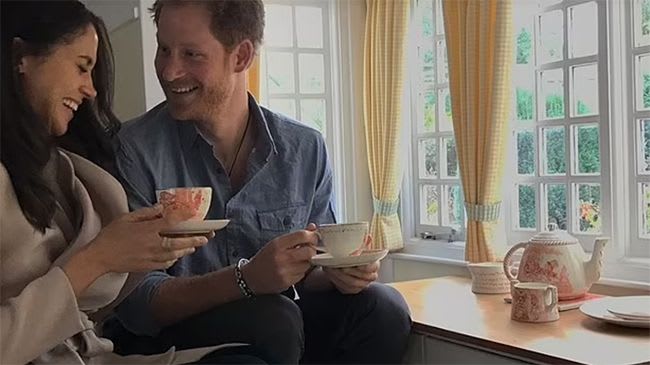 The pair enjoyed tea in the Queen’s fairytale cottage

Other pieces of footage from their series have also been shared from within the Queen’s private residences, including one that featured Harry and Meghan walking hand in hand inside an oval-shaped room.

Under royal protocol, permission had to be sought from the late Queen for photographs and videos to be taken inside the Palace, and the Telegraph reports that the couple didn’t have the necessary permission.

VIDEO: Princess Kate is mistaken for somebody else and her reaction is brilliant

However, it is believed that the pair were not made aware of any complaints and that the photographer was not asked to leave the premises.

The photo was taken during Harry and Meghan’s ‘farewell tour’, which saw them undertake various engagements ahead of their departure from the royal family and move to the United States.