Home » Celebrities » Pierre Cardin: His Mind Has to Travel 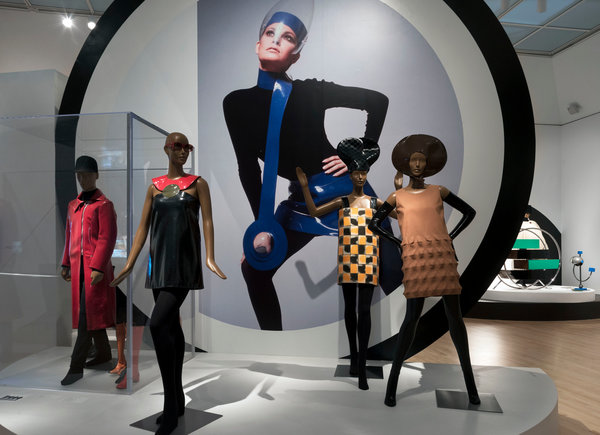 Pierre Cardin has spent a lifetime waging battle, imposing his will and maverick sensibilities on the wayward human form.

“When I design a dress, I don’t design it around a woman’s body,” he once famously said. “I design the dress, and then put a woman inside it.”

That credo has informed much of the 97-year-old couturier’s prophetic output, on view in “Pierre Cardin, Future Fashion,” a retrospective that opens on July 20 at the Brooklyn Museum.

Highlights of the show — they include a 1970 brief roll-collar tunic over a black wool unitard, a 1969 orange and black “armor dress” made of Plexiglas and vinyl, and a 1968 Plexiglas helmet with a face shield — attest to a relevance that persists to this day.

The designer, who experimented early during his six-decade career with synthetic fabrics and gender-neutral fashions, has influenced a swath of his style-world successors, said Matthew Yokobosky, the museum’s senior curator of fashion and material culture. 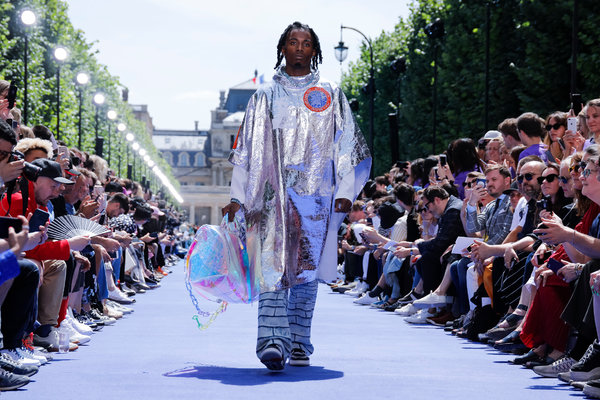 Inspired by a youthful fascination with the American and Soviet space programs, Mr. Cardin’s signature pieces did not so much move with the body as contain it, forming a kind of carapace cobbled from geometric shapes of silver foil, brightly colored vinyl and Cardine, a Dynel fabric that could be modeled into three-dimensional forms. He mined their properties to lend substance and resilience to his sculptural space age designs.

As far back as 1958, Mr. Cardin was putting models in crash helmets matched with tiny plastic skirts and colored stockings, and by the mid-1960s he was dressing men and women in malleable jumpsuits worthy of the Starship Enterprise.

During that decade, his futuristic experiments gave rise to what he christened Cosmocorps, a collection of collarless or roll-neck tops and jackets, some of them spliced with asymmetric zippers. Showcased in Brooklyn are his Cosmocorps jumpsuits and unitards, which doubled as foundation garments worn by both sexes under skirts, elongated vests, codpieces and theatrically outsize jewelry.

His lapel-free men’s suits didn’t sell, Mr. Cardin acknowledged. But his women’s designs, all funnel collars, A-line coats and easy-fitting shift dresses with strategically placed “portholes,” were successful and widely copied. Among them are a minidress and bandeau with circular breast rings, exhibition standouts. 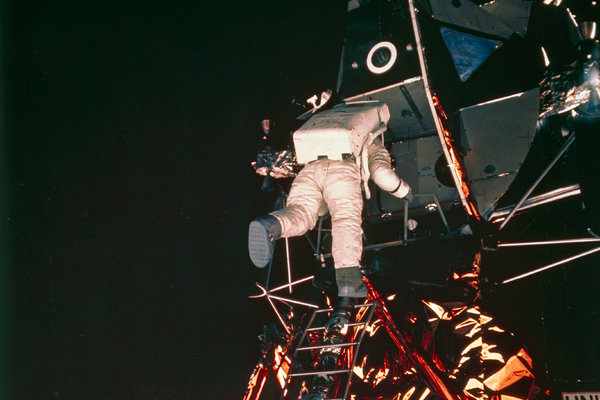 A 1969 visit to NASA inspired runway novelties like a blue vinyl necklace and miniskirt accessorized with a clear acrylic visor, and even a line of supersize vinyl goggles. If some of those pieces seem provocative now, that may be because they anticipated the kind of current fashion flying under the banner of gender fluidity.

“For me,” Mr. Cardin told Mr. Yokobosky in an interview for the exhibition catalog, “it was especially important that my creations, regardless of gender, require the body to adapt.”

Mr. Yokobosky said this week, “Before Cardin we weren’t having this whole discussion of how short can a skirt be, how long can a men’s tunic be? And when do they become the same thing?”

Mr. Cardin’s most fanciful creations made ingenious use of wire mesh speakers and, in some cases, LED lighting. Screened in the exhibition is a 1962 episode of the animated television series “The Jetsons,” in which Jane, the family matriarch, models a gown, “a Pierre Martian original,” as she giddily proclaims, plugging in an attached electric cord to light up its contours.

Similar midcentury innovations prefigured today’s continuing romance with techno-fabrics: neoprene and lab-generated variations on nylon polyester, to say nothing of textiles that change color like a mood ring.

Mr. Cardin’s ardor for interstellar exploration dated from his earliest years. “I anticipated space fashion even before the space conquest became real,” he told Mr. Yokobosky. “When I was a child, I always imagined that man would one day walk on the moon.”

A self-professed outlier, Mr. Cardin worked at night in relative isolation, all but oblivious to the work of his contemporaries. “I was never influenced by anyone,” he insisted, except perhaps Balenciaga, whose asceticism he embraced.

“I like the clean side of things,” he said. His dresses, he added, “are resolutely modern,” free of excessive ornamentation.

Such observations leave Mr. Cardin unfazed. “Clothing is meant to give the body its shape,” he likes to argue. It’s a concept with a future, he suggests.

Roguishly, he added, “We will all walk on the moon or Mars wearing my Cosmocorps ensembles.”