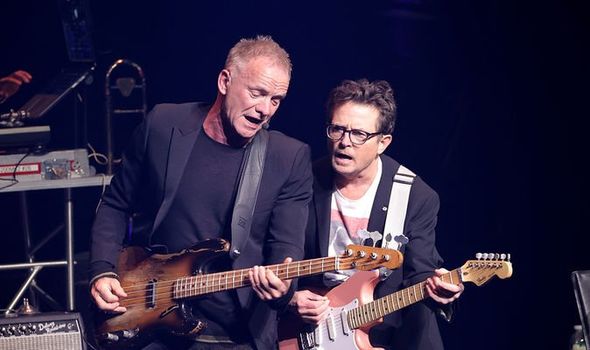 He was joined on stage by pop star Sting for the fundraising event for Parkinson’s disease research.

The Back to the Future star, 60, whipped out an electric guitar on Saturday. It took fans back to the 1985 time-travelling movie when Marty McFly shocks the 1955 crowd by frenetically playing Chuck Berry’s 1958 rock ‘n’ roll hit Johnny B Goode.

The annual gala, A Funny Thing Happened On The Way To Cure Parkinson’s, was hosted in New York by actor and comic Denis Leary, 64.

Fox was diagnosed with the condition in the early 1990s but it wasn’t until 1998 that he went public.

Fox was joined by his four children, Sam, 32, 26-year-old twin daughters Aquinnah and Schuyler, and his youngest Esme, 19.

Two years after going public with his diagnosis, Fox launched the Michael J Fox Foundation for Parkinson’s Research to help fund the hunt for treatments and a cure. It has directly helped develop several therapies after raising £700million.

Fox said: “I enjoy life more. I’m more comfortable in my skin than I was 20 years ago. I can sit down and be calm. I couldn’t do that 25 years ago, “That’s the medications, the drug cocktails and therapies that we’ve been a part of.”

Fox was celebrating the 20-year anniversary of the foundation after Covid stopped last year’s gala.