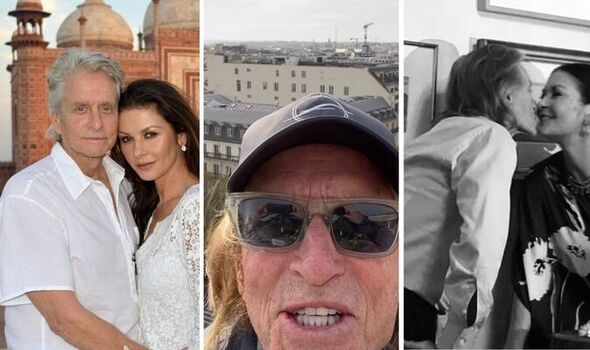 The Oscar-winning actor has ditched his grey tresses in place of new auburn locks.

Michael Douglas, 78, has shocked fans with a bold new look unveiled on his Instagram. The star’s new style choice has raised eyebrows with his followers.

The star has traded his grey hair in place for new, auburn locks as he showed off his appearance on the picture-sharing website.

Michael didn’t directly address his new looks in the video, but it didn’t go unnoticed by fans.

The actor was wearing a hat underneath which his new long tresses could be seen.

In the caption for the post, he wrote: “Hey guys! Happy #TGIF! Have a good one! Lots of love! MD.”

The couple could be seen indulging in a rich chocolate cake.

Michael Douglas addressed his loyal fans for the post.

Michael Douglas’ hair could be seen blowing in the wind

The star’s fans were very excited about the change in style.

Catherine Zeta-Jones and Michael Douglas both posted a photo of the couple blowing out their candles.

Michael Douglas thanked his fans in the video for their messages

“Thank you all for the kind birthday messages! We love you all,” Michael captioned the photo, to which Catherine sweetly replied: “So much fun sharing my birthday with you.”

Catherine Zeta-Jones penned a heartfelt tribute to her husband

The Chicago actress penned a loving tribute to her husband of 20 years on their special day, alongside a cozy photo of the two of them together.