Meghan McCain slammed Donald Trump on Twitter for another baseless attack on her late father, John McCain, calling the president an absolute ‘disgrace.’

Meghan McCain called out Donald Trump for his “obsession” with her father, John McCain, after the president launched yet another attack on the late Arizona senator. “Two years after he died, you still obsess over my dad. It kills you that no one will ever love you or remember you like they loved and remember him,” The View co-host tweeted. “He served his country with honor, you have disgraced the office of the presidency.”

Trump tweeted out a Breitbart News article that revealed Senator McCain’s supposed “role” in the Mueller probe, adding the note “check out last in his class John McCain, one of the most overrated people in D.C.” The senator died of brain cancer in 2018. Before his death, McCain wasn’t shy about his disdain for the president. He specifically barred Trump from attending his funeral; Trump then complained in a radio interview that the McCain family didn’t “thank” him for it.

Though the two men sparred long before Trump had presidential dreams, the attacks ramped up after McCain condemned him calling Mexicans “rapists and murderers” in 2015. Trump later said in an interview that he didn’t consider McCain, a Vietnam POW, a war hero. Trump, who dodged the draft five times, commented that he liked “people that weren’t captured.” 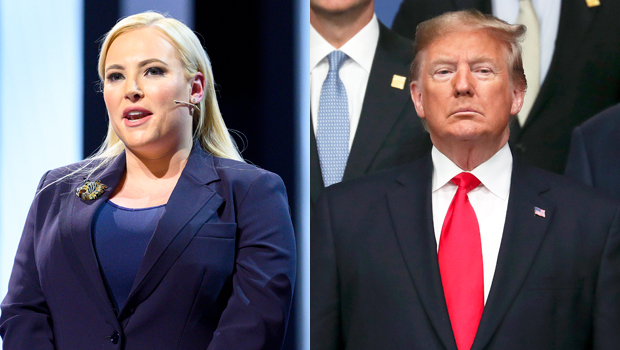 The hits continued, and long after McCain’s death. As Meghan said on The View in March 2019, “He spends his weekend obsessing over great men because he knows it and I know it and all of you know it: He will never be a great man.” He allegedly threw a fit when the USS John McCain was docked near he was giving a Memorial Day speech that May. Meghan called him “a child.”

Meghan pointed out in her December 18 tweet that Trump “couldn’t even pull it out in Arizona.” For the first time in over 20 years, Arizona voted blue in the presidential election, handing both their popular and electoral votes to Democrat (and now president-elect) Joe Biden. Maybe don’t insult their beloved senator?