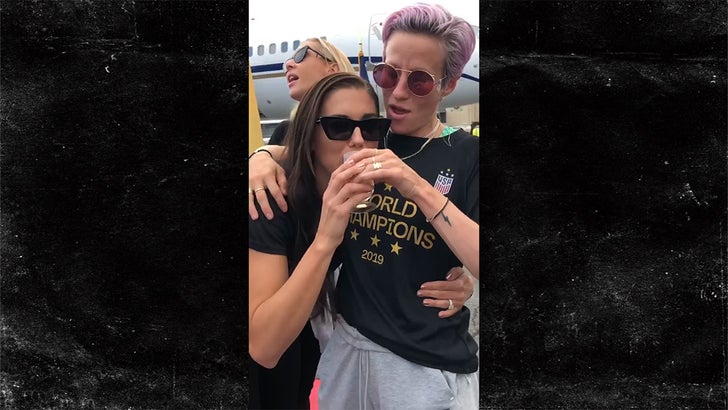 The champs are here … AND THEY BROUGHT THE BOOZE!!!

Megan Rapinoe, Alex Morgan and the rest of the U.S. Women’s National Team just touched down in New York City on Monday after winning the World Cup … and they’re clearly ready to party!!

Rapinoe pimp walked off the jet onto a waiting red carpet with a glass of booze in hand — SWAAGGGGG!!!

The scene was awesome … the women were singing “We Are the Champions” and showing off their medals and trophy while wearing “World Champions 2019” shirts.

At one point, one of the players screams out, “I love America!”

Morgan was feelin’ herself too … she grabbed Rapinoe’s cup and took a sip for herself!

Of course, the women are still celebrating their 2-0 victory over the Netherlands in France … where they secured their second straight World Cup championship.

They’re in New York now to continue the party — a victory parade is set for Wednesday morning in Manhattan.

As for if a White House visit is on deck, don’t bet on it …