Home » Celebrities » Maude Apatow on nepotism: I obviously understand that I’m in such a lucky position 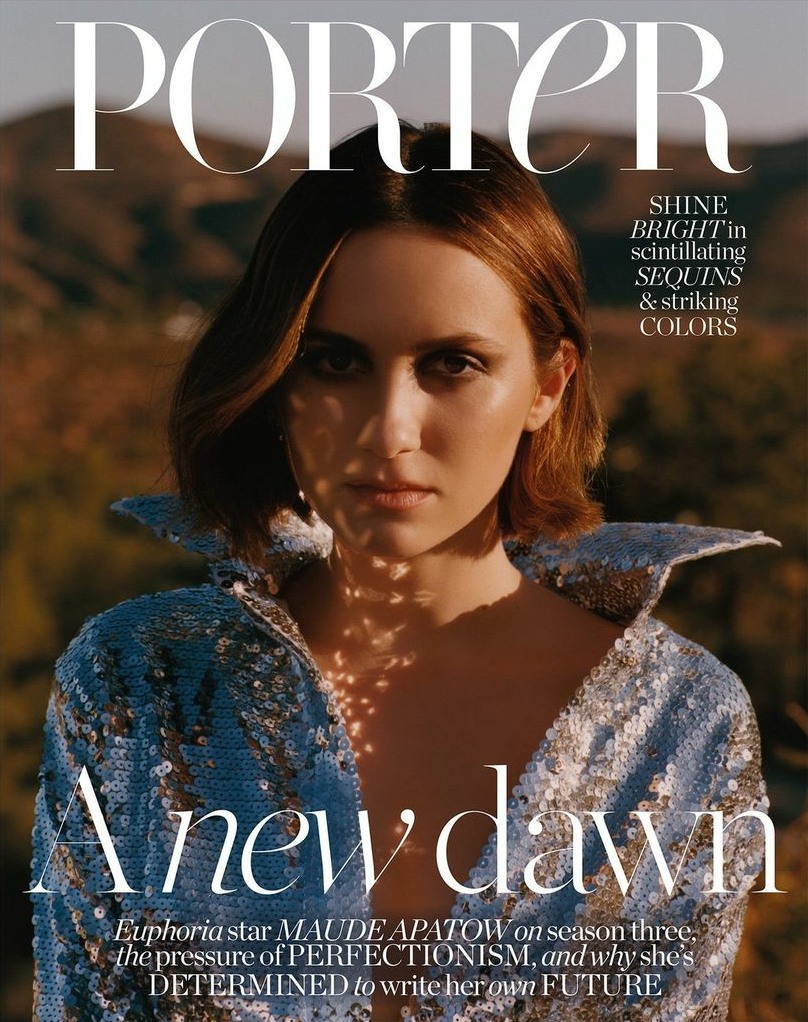 Maude Apatow is the daughter of Judd Apatow and Leslie Mann. Judd put his daughters in many of his films, and now Maude is all grown up – she’s 24 – and getting roles outside of her parents’ films. Maude is on Euphoria, which is why she covers the latest issue of Porter Magazine, the in-house magazine for net-a-porter.com. I’ve never really paid attention to her before, and I’ve come out of this interview feeling a bit meh. She’s not terrible, she’s not conceited, she’s just… there. She deals with anxiety, she’s trying to become a writer too and she talks a bit about nepotism. Some highlights:

Her experience with fame: It has been “totally fine. Sometimes when I’m alone I get a little nervous, but I also don’t go out that much.”

Burning bridges: “I was very shy at school, but I also cared so much. I’d channel all my anxiety into theater. Everything had to be just perfect. That’s not always a good thing; I probably burnt a lot of bridges.’

Auditioning for Euphoria: Apatow was a student at Northwestern University in Illinois when she first auditioned for the role of Lexi, having recently played a small part in Levinson’s 2018 movie Assassination Nation. “I always felt like he got me. He has a lot of similar anxieties to me and has been so supportive. I think he knows what I’m capable of and how to push me,” Apatow says. However, despite having the director onside, the Euphoria audition process was grueling. “The final one was with the network; it’s you in a room, performing in front of 15 people in suits. I was so anxious I just blacked out.”

History of anxiety: “In high school, I was nervous all the time, I never stood up for myself and I felt like people would take advantage of the fact I wouldn’t ever argue. In class, I’d be nervous to raise my hand and speak, even though I would always be thinking of things to say. I just never felt confident.”

Her famous parents are why she strives for perfectionism: “Oh, for sure! I try not to think about that so much, but it definitely drives me. I feel like I really need to prove myself, so I work extra hard.”

Nepotism baby: “At first I was sad…” She stops. “Because it felt like people weren’t judging you on your talent?” I ask. “Right. And that’s fine. I try not to let it get to me because I obviously understand that I’m in such a lucky position. A lot of people [in a similar position] have proven themselves over the years, so I’ve got to keep going and make good work. It’s so early in my career, I don’t have much to show yet, but hopefully one day I’ll be really proud of the stuff I’ve done by myself.”

The writer: “My dad always told me acting is tough because you never know what’s going to come next. He always encouraged me to write. You can shoot a movie and really hope it will work, but you don’t know how they’re gonna edit it. To not have any control of that is scary sometimes, so I try to do other things….I’m always hard on myself. Sometimes I get in my head and think, ‘Why would anyone want to hear what I have to say?’ Then I tell myself, it doesn’t matter, it’s just entertainment. I try to clear my head of any of those thoughts. You can’t constantly judge yourself: it’s such a creativity killer.”

I think that’s probably the right kind of attitude to take about being a nepotism baby, honestly. I mean, what are nepotism babies supposed to do? Not use their famous last names or their parents’ connections or their (overwhelmingly white) privilege? Getting defensive about nepotism won’t help matters, so just put your head down and go to work on the jobs you’ve gotten through your family connections. And don’t say sh-t about how benefiting from nepotism makes you work “twice as hard.” Please.