If you’ve ever been watching a morning show and the co-hosts’ chemistry made you wonder if they’ve ever hooked up… boy oh boy do we have a story for you!

T.J. Holmes joined Good Morning America a couple years ago, and in that time he and Amy Robach have quickly become the best of friends. Fans of the show will remember the time they trained for and ran the New York Half-Marathon together. Well, it turns out they’ve become rather more than friends — according to a bombshell new report in DailyMail.com, the co-hosts have been having an affair for about five months!

That’s a big problem since both of them are married!!

T.J. has been married since 2010 to a lawyer named Marilee Fiebig. (A lawyer? Oof, probably not wise to piss her off…) Not only have they been together 12 years, they share a daughter. Here are T.J. and Marilee discussing the secret to a perfect marriage on the red carpet back in 2012.

Innerestingly Amy has also been married for 12 years. Her husband you may recognize: Andrew Shue, aka Billy from Melrose Place! They were an IRL Brady Brunch as he has three sons from a previous relationship and she has two daughters from her first marriage.

Andrew was also friends with T.J. as they were all part of the half-marathon crew. In fact, Marilee spent time with them, too, on double dates. An insider spilled:

“Everyone knows that Amy and T.J. have been close friends for a long time now, running together and even socializing as a foursome with each other’s spouses.”

The thing is, there was some socializing the spouses didn’t know about, between just the GMA stars. DM published a series of photos and videos of Amy and T.J. on Wednesday hanging out together at the bar, on the streets of NYC, after a workout. Most of it could be written off as innocent friendly co-worker hangouts. But not all!

There are a couple very damning moments where the secret couple is caught red-handed, so to speak. First there’s a pic of them through the window of a car, where they thought no one was looking — and they’re totally holding hands! Fingers interlocked, a total couple handholding moment.

But the big moment is when the pair were captured on video unpacking during a little romantic getaway at a cabin in the woods just two weeks ago. As he walks behind her J.T. can be seen giving Amy’s tush a playful pat. She barely responds — it’s the intimate playfulness of a man who’s touched a woman’s bootie a great many times. Butt hey, look and judge for yourself!

DM did some digging and were able to guess the affair had at least began by June. Insiders told the outlet folks noticed something was different “when they were in London together filming the Queen’s Diamond Jubilee for ABC” — and their co-workers began “buzzing about the intimacy between them.”

Was it already going before then? We wouldn’t be surprised if the seeds got planted during the marathon training sessions. It was spring in NYC, they were spending all that time getting hot and sweaty together… That’s where our money is at. “Robes” as T.J. calls her bragged at the time about how she “was able to work the rest of my work/family life around our runs.” Mm-hm… 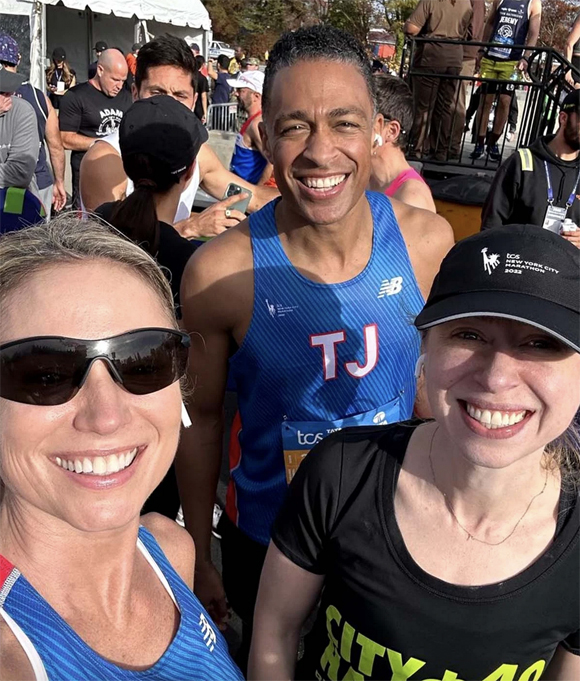 In retrospect some of their social media posts from the time seem to be hiding in plain sight. Like an Instagram from July in which they’re both wearing pink, which Amy captioned:

And then there was the time Holmes posted a pic of the co-hosts in El Lay in March with ABC News president Kim Godwin — that one is captioned:

“Yep, head of ABC News had to fly all the way to LA to make sure we were behaving.”

For what it’s worth, Godwin denied she was aware of a relationship. BTW, don’t bother looking for any of those posts anymore — both stars deleted their IG accounts completely once news of the affair hit. Not exactly something innocent folks do! Just sayin’!

DailyMail may be breaking the news of the affair to the public, but it seems the couple came clean with their significant others after a couple months. According to the outlet, both anchors quietly separated from their partners in August. However, they still seem to be keeping their relationship a secret — maybe because of how the public will react? Or it’ll mess up their jobs? We guess we’ll see…

What do YOU think of these two co-stars becoming lovers? Did you see it coming?? Let us know in the comments (below)!