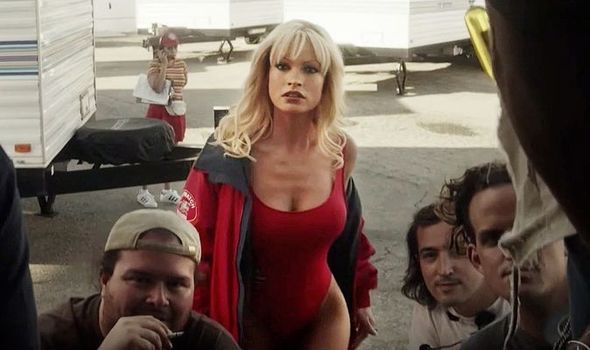 The Mamma Mia! star is a dead ringer for Pamela Anderson in the new series about the blonde bombshell’s relationship with Motley Crue drummer Tommy Lee – and their notorious sex tape.

In a trailer this week for Pam and Tommy, viewers get a glimpse of the couple making the video that shocked the world after it was posted online in the 1990s.

It then goes on to show Pamela and Tommy, played by Sebastian Stan, struggling with the fall-out.

But fans have marvelled at how much Lily looks like the glamour model-turned-Baywatch babe. She has even perfected Pamela’s slo-mo runs along the beach.

The trailer shows Tommy setting up a camcorder before joining his wife on a bed. The resulting tape was stolen by actor-turnedelectrician Rand Gauthier, played by Seth Rogan in the show, made by US streaming service Hulu.

Tommy had reportedly refused to pay for work on their house and pulled a gun on Gauthier to scare him away.

But Gauthier took his revenge by stealing a safe from the couple’s garage which, to his surprise, contained the tape.

He made and distributed several copies and the video – considered the first ever celebrity sex tape – was soon all over the internet.