Khloe Kardashian replied to speculation that her daughter True was photoshopped in Dec. 2021 Disneyland pics after sharing new video clips at the theme park for the tot’s 4th birthday.

Khloe Kardashian, 37, is admitting previous photos showing her daughter True at Disneyland in Anaheim, CA weren’t real. The Keeping Up with the Kardashians star took to Twitter to respond to followers asking if she photoshopped the tot in snapshots that were posted by her sister Kim Kardashian in Dec. 2021. The speculation started when the doting mom shared videos at Disneyland for True’s 4th birthday on April 12 and revealed it was her “first time” at the theme park.

“Welllppp I f*cked this one up. Anyways….. let’s focus on something else. Our show airs in a few days,” Khloe wrote in a tweet along with laughing emojis.

In one video clip she posted, little True can be seen excitingly hanging out with her mom and others on a ride as Khloe tells the camera, “This is True’s first time to Disneyland and we’re going on It’s a Small World,” while advising her to look at the camera as she smiles. Other clips show the family walking around the park and enjoying the sights while also waving at Disney characters walking by.

Shortly after Khloe shared the Instagram story videos, one Twitter user pointed out that it didn’t make sense for it to be True’s “first time” at Disneyland if previous pics posted by Kim showed her posing with her cousin Chicago at the park. 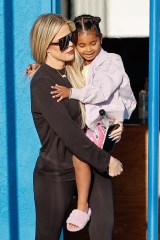 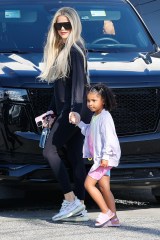 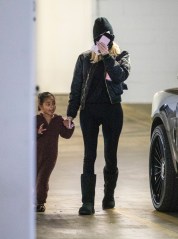 “💕 lots of love 💕,” Kim captioned the pics, which appeared to show the girls posing and smiling while on a ride as well as standing outside together while wearing Minnie Mouse ears and holding up The Little Mermaid toys.

Khloe didn’t explain who photoshopped the pics or why, but perhaps the loving mom and aunt wished she could have made the trip back then and that was the reason they digitally included her. Whatever the case may be, it seems the birthday girl had a blast regardless as the KarJenner family gets ready for the premiere of their new Hulu reality series, The Kardashians. The first episode of the show airs on the network on April 14.