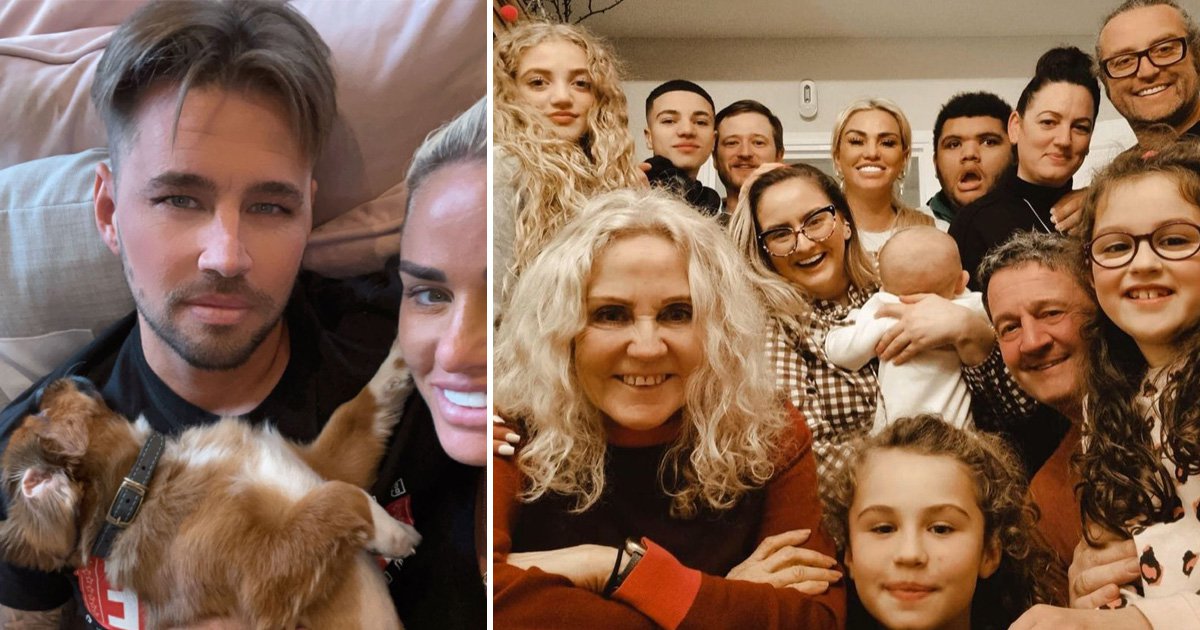 Katie Price has shared photos and videos of her hanging out with fiancé Carl Woods after spending Christmas Day with her family.

The former glamour model, 43, was seen chilling with car salesman Carl, 32, and his dog Sid as she asked the pup whether he’d had a good Christmas.

She could be heard telling him: ‘Sid! Did you enjoy Christmas, Sid? Did you?’, before Carl replied: ‘He loves it.’

Katie then grimaced as Sid almost put his mouth on hers while wriggling in Carl’s arms.

She also took to Instagram to share more photos of the wholesome day she had spent with her family, writing: ‘Some pictures from yesterday, hope everyone is having an amazing Boxing Day.’

In the snaps, Katie’s daughter Princess, 14, could be seen hugging her eldest son Harvey, 19, as she looked on, with her mother Amy and son Junior, 16, wearing paper crowns next to her.

Amy, who has the terminal lung condition idiopathic pulmonary fibrosis, could be seen with an oxygen tube in her nose as she smiled with joy at spending the day with her family.

In other photos, Harvey could be seen opening his presents before hugging Katie’s dad, who was dressed up as Santa Claus.

Katie had also posted on Christmas Day, telling her followers: ‘This is what Christmas is all about. Being with family.’

While Carl was not spotted in the photo, Katie had spent the day with her parents, Junior, Princess and Harvey, her sister Sophie and other family members.

The group looked to have had a wonderful day as all were smiling at the camera as they posed together after their meal.

Junior and Princess appeared to split the day between their mum and dad, Peter Andre, also appearing in photos on his Instagram page as they opened presents with him, wife Emily MacDonagh, and their younger brother and sister on their dad’s side, Theo and Amelia.