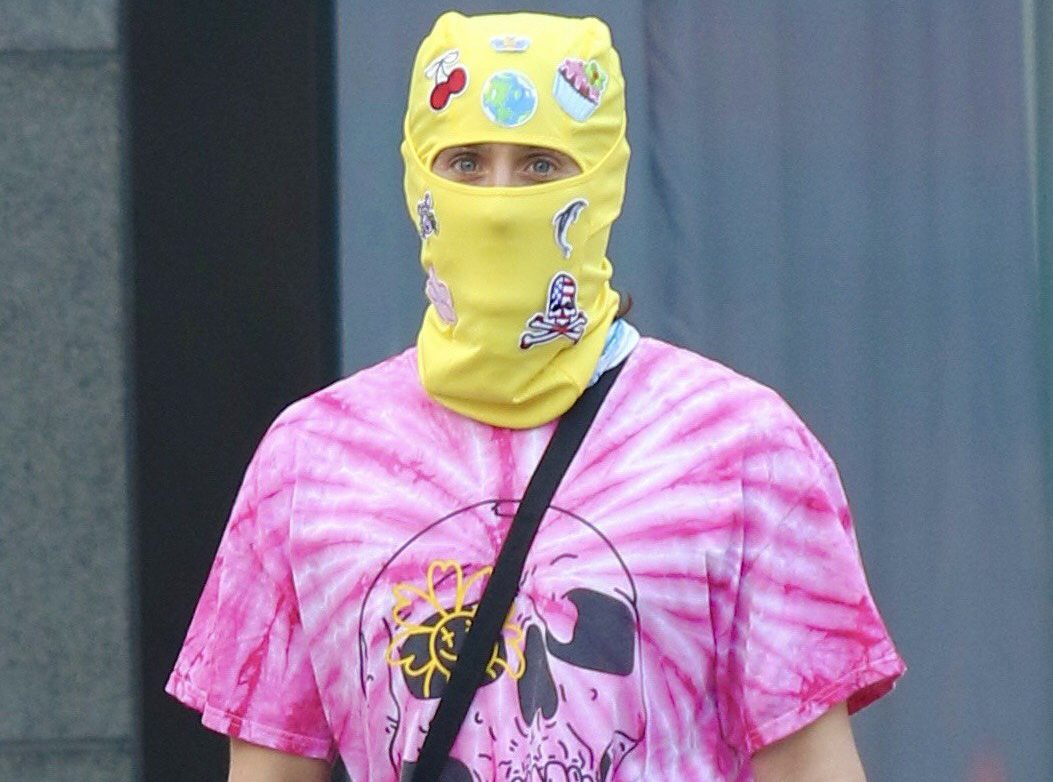 Jared Leto may need to rethink his definition of incognito as he attempted to go unnoticed in New York.

The Suicide Squad actor, 49, was spotted hitting the streets in the most eye-catching of looks, which didn’t quite do the job if he wanted to keep things low-key.

He donned bright red tracksuits for the day, paired with a pink tie dye T-shirt emblazoned with a gigantic skull.

As well as this, he opted for a bright yellow ski mask over his head, complete with stickers – because why not?

At one point, the Oscar winner swapped the ski mask for a blue face covering, adding a navy cap to his very colourful look.

To be honest, all that was missing was a huge blinking sign with an arrow that said: ‘I’m Jared Leto’.

Jared casual outing comes as he’s set to hit the big screen once again, in upcoming biopic House of Gucci.

He took on the role as Paolo Gucci in the thriller, alongside an all-star cast including Lady Gaga, Adam Driver and Al Pacino.

Although the flick won’t be out until November 6 in the UK, fans are already living for his wild transformation for the part, sporting a very different look for his recently released solo poster.

In fact, the star looked unrecognisable in the snap, sporting prosthetics, a receding hairline and moustache, while wearing a grey blazer and striped shirt, with a flower pinned to his lapel.

Unsurprisingly, impressed film fans have already tipped him for an Oscar, as well as a gong for the hair and makeup squad.

House of Gucci follows the true story of Patrizia Regianni (Lady Gaga), who was convicted of plotting the 1995 murder of her ex-husband Maurizio Gucci (Adam Driver).

The movie, directed by Ridley Scott, is based on the book of the same name by Sara Gay Forden, with Salma Hayek, Jeremy Irons and Tom Ford rounding out the cast.

We will be counting down every second until it hits the big screen.

Princess Märtha Louise and Shaman fiancée say they both have 'powers'