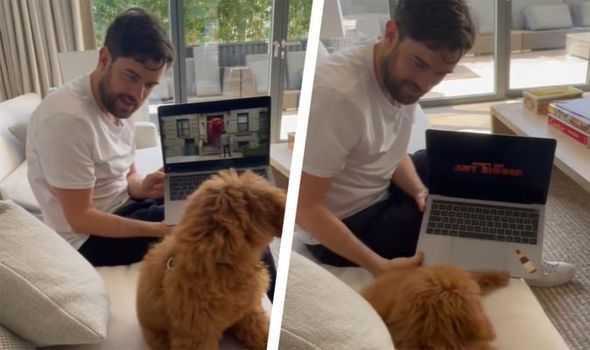 The Bad Education star was recently named as Britain’s best paid celebrity, overtaking Bradley Walsh, making his cockapoo, Coco, one of the luckiest pampered pups in the UK.

Earlier this year Jack splashed out £12 million on a new home with model girlfriend Roxy Horner, where he lives with the curly haired puppy.

Coco often features on Jack’s Instagram account, with the comedian sharing a hilarious video showing the dog the trailer for his new film.

The caption read: “Thought I’d share the Clifford trailer with Coco. Fair to say, she was a tough crowd.”

The dog completely turned her back on the screen as Jack said: “Bit rude, isn’t it.” From behind the camera, Roxy added: “Do you not like it, Coco? I know there’s another dog on the TV but you can’t be that jealous.”

“Yes, I hang around with other dogs,” Jack quipped, “is it my American accent?”

The pooch has also been spotted on walks with her famous owner, and in one adorable photo, Jack captioned it #NeverLeaveAManBehind.

He’s also enjoyed taking Coco on beach trips, like Whistable, joking: “Who’s walking who?” in front of the waves.

Clifford the Big Red Dog, which will be released on November 10, isn’t Jack’s first film with a canine cast.

In 2019, he starred in The Queen’s Corgi as Her Majesty’s favourite pet Rex, who ends up lost from the palace and has to embark on an adventure to get home, making new friends along the way.

In the movie, which has a 4.8/10 star rating on IMDb, also features dog-lover Sheridan Smith, Ray Winstone and Matt Lucas.

Posting about the new movie on Instagram, Jack wrote: “If you can suspend your disbelief enough to buy a world in which, get this… I have an American accent! Then you will love this movie.”

The story sees little girl Emily Elizabeth meet a magical animal rescuer who gives her a small red puppy, only to wake up and find a 10 foot tall Clifford towering over her in her small New York apartment.

As her mother is away on business, Emily and her ‘fun but impulsive uncle’, played by Jack, set out on a Big Apple adventure.

The busy comedian doesn’t appear to be one for downtime, and released a book he’d written in lockdown last week called How To Survive Family Holidays, in which he warns are ‘some scandalous photos that may scar you for life’.

Keep up to date with all our TeamDogs news by following our social pages. As well as videos, tips and advice, we’ll also be sharing some of your amazing doggy pictures so follow us on Facebook, Instagram and Twitter.