When it comes to being a stylish royal, you have to consider things like opting for appropriate clothing for each occasion (which might not be as easy as it sounds if you take a look at some of Megan Markle’s supposedly scandalous ensembles), choosing hairstyles that are trendy yet classic, and picking the perfect accessories for each outfit. However, royals get much more than just a nice pair of earrings and perhaps a necklace. Instead, they sometimes get to wear some of the most stunning (and expensive) jewelry in the world. That’s why you might have wondered how Queen Elizabeth II keeps the royal family’s various crowns and tiaras in tip-top shape. Well, an insider has opened up about touching up the monarch’s jewelry.

Angela Kelly — who works as the queen’s Personal Advisor and Curator (The Queen’s Jewellery, Insignias, and Wardrobe) and In-House Designer — wrote a book called “The Other Side of the Coin: The Queen, The Dresser, and the Wardrobe.” According to People, Kelly breaks down in the book how she created some of the most iconic looks in Elizabeth’s 60-year reign and details about what goes into caring for the monarch’s massive wardrobe. That last part involved something very unexpected.

The surprising secret behind the Queen's sparkling diamonds 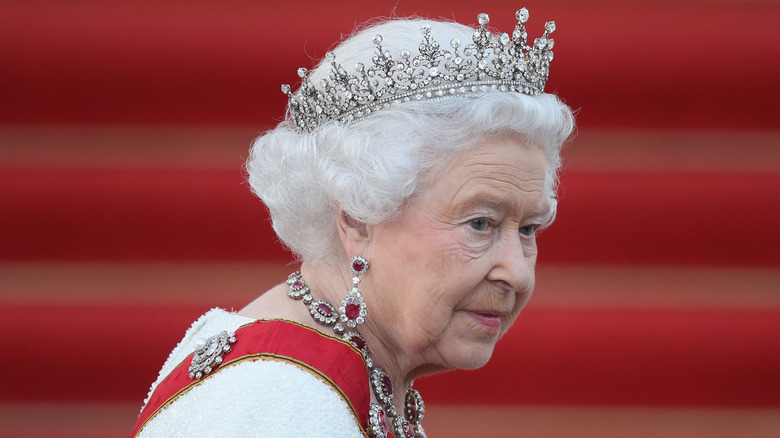 If you’re looking for a few wardrobe-related tips, it couldn’t hurt to take a couple from “The Other Side of the Coin: The Queen, The Dresser, and the Wardrobe” author Angela Kelly. In the book, the royal insider revealed what it takes to make the monarch presentable, according to People, however, some of the methods used might not be what you would expect.

For instance, when it comes to removing stains from hairspray, apparently, a simple “drop of washing-up liquid and water” will do the trick. Of course, People notes that Kelly was referring to what she uses when preparing Queen Elizabeth II for the Opening of Parliament and other formal events. The basically priceless jewels that will be worn for evening are first laid out on “a tray that once belonged to the Queen Mary.” As for shining up the monarch’s royal jewels, Kelly admitted, “A little gin and water come in handy to give the diamonds extra sparkle — just don’t tell the jeweler!” We wonder what vodka or whiskey would do.