Play it cool! Holly Willoughby and Phillip Schofield put on united front at launch of Dancing On Ice – after viewers claimed they looked ‘awkward’ on This Morning following feud rumours

Holly Willoughby and Phillip Schofield put on a united display as they attended the Dancing On Ice launch held at Bovingdon Airfield in Hertfordshire on Monday.

Their appearance comes just days after host Phillip, 57, was accused of creating a ‘toxic atmosphere’ for his This Morning co-stars, with allegations of ongoing spats with Holly, 38, and stand-in hosts Ruth Langsford and Eamonn Holmes.

But the duo quashed speculation as they reunited for the launch of the competition series – set to air this year – just hours after viewers claimed the duo acted awkward on TV. 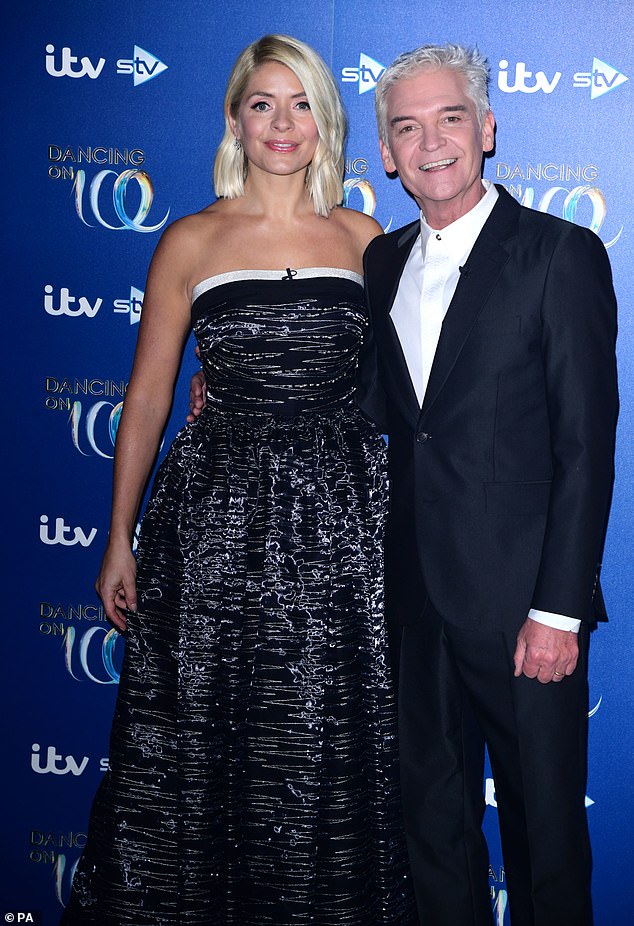 United: Holly Willoughby and Phillip Schofield put on a defiant display as they attended the Dancing On Ice launch held at Bovingdon Airfield in Hertfordshire on Monday

Holly cut a glamorous figure in a strapless black dress which was adorned with silver stitching, while Phil cut a dapper figure in a sharp black suit and white shirt.

The hosts looked a little awkward as they posed for photos before this year’s celebrity line-up worked the camera.

Holly and Phil returned to This Morning on Monday – marking the first time since reports of their bitter feud emerged.

When they returned to screens for the daytime chat show, fans said it seemed like the close duo had fallen out over something due to the tense atmosphere. 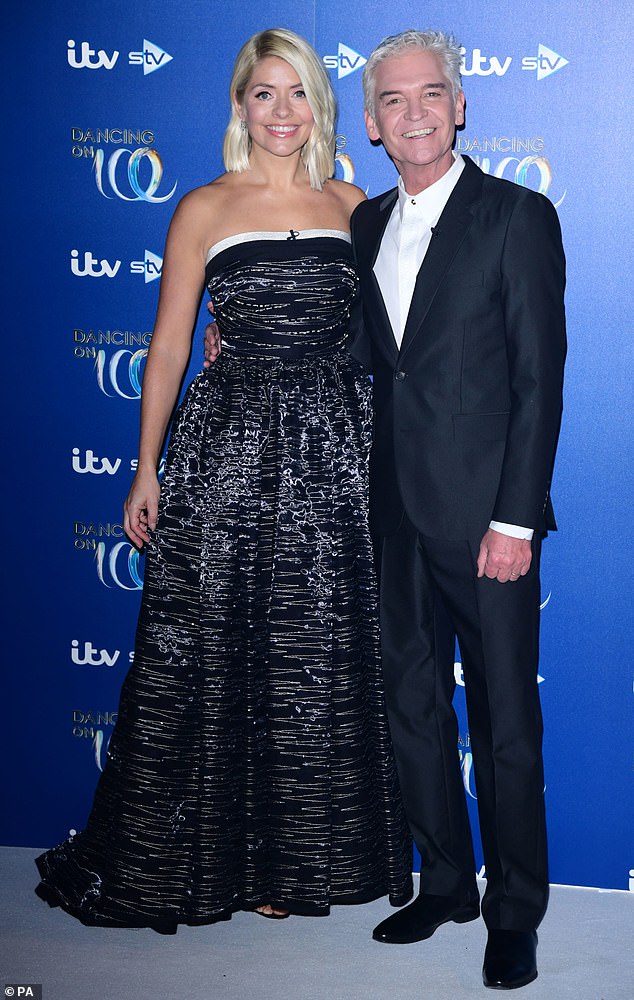 Secret feud? It comes just days after Phillip, 57, was accused of creating a ‘toxic atmosphere’ for his This Morning co-stars, with allegations of ongoing spats with Holly 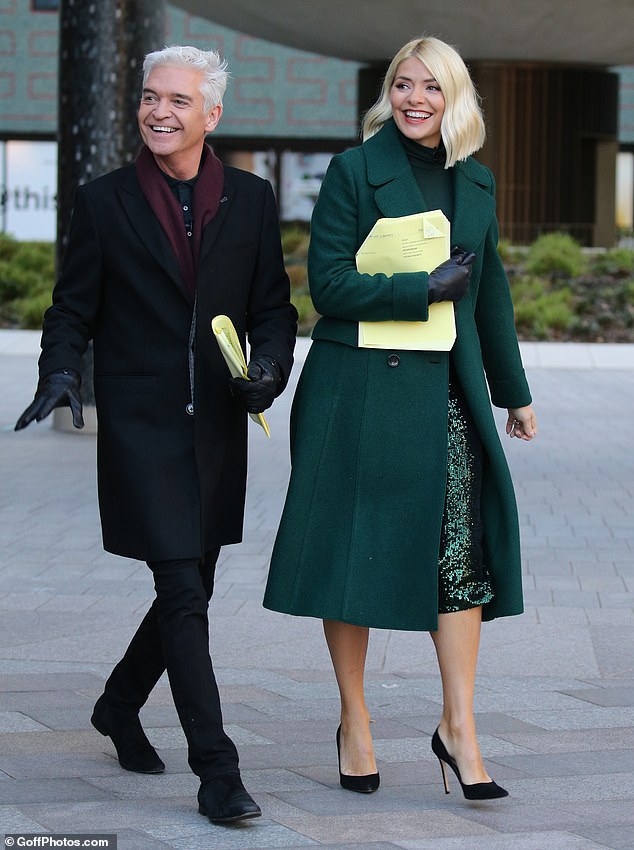 Tense? When they returned to screens for the daytime chat show on Monday, fans said it seemed like the close duo had fallen out over something due to the tense atmosphere

Many took to Twitter to express their views, with one writing: ‘#ThisMorning you can cut the atmosphere with a knife on This Morning. Phil and Holly no longer working!! #timeforachange.’

While another also commented on the awkwardness, saying: ‘Holly over talking and Phil over listening #elephantintheroom #ThisMorning.’

A third said: ‘Is it me or do Holly and Phil look like they’ve had a falling out looks awkward #ThisMorning.’

Reaction: Many took to Twitter to express their views on their first TV appearance since the claims emerged

‘It’s the only reason we are still watching right??? #ThisMorning.’

One commenter said: ‘Just put This Morning on, you can tell Holly cant’ be bothered with Phil. Friendships/people you work with are like relationships, after years of being together they come to a natural end.’

While another thought it felt forced, writing: ‘Omg they’re both trying a bit too hard #ThisMorning.’

Agreeing with this, another said: ‘Nice way to cover up the big #phillipschofield feud then #ThisMorning.’

A third said: ‘Is it me or do Holly and Phil look like they’ve had a falling out looks awkward #ThisMorning’

It is claimed eight different ITV presenters have broken their silence regarding Phillip’s attitude. The show’s Friday presenter Ruth, 59, is said to have made an official complaint.

A report stated the situation behind the scenes at This Morning had become ‘toxic’ in recent months, with employees too scared to speak out publicly for fear of backlash.

An ITV source told The Sun: ‘For so long people have been silenced because they are scared for their job. If they speak out publicly about the atmosphere they fear there could be repercussions.’ 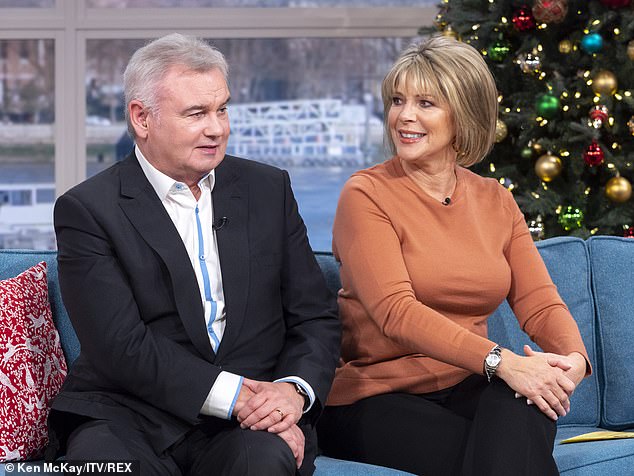 Feud? There are allegations of ongoing spats with Holly and This Morning stand-in hosts Ruth Langsford and Eamonn Holmes (pictured together last week)

An insider close to Holly added to the paper: ‘It’s true there have been some issues. They’re like brothers and sisters – they have ups and downs but love each other.’

Hitting back at the reports, a spokesperson for ITV said: ‘It’s deeply disappointing and unfair for Phillip to be the target of this sort of malicious gossip.’

‘Phillip is a much respected broadcaster and colleague and this is absolutely not a description of This Morning that we recognise.

‘Holly and Phil are great friends both on and off screen and are popular among viewers and colleagues alike.’ 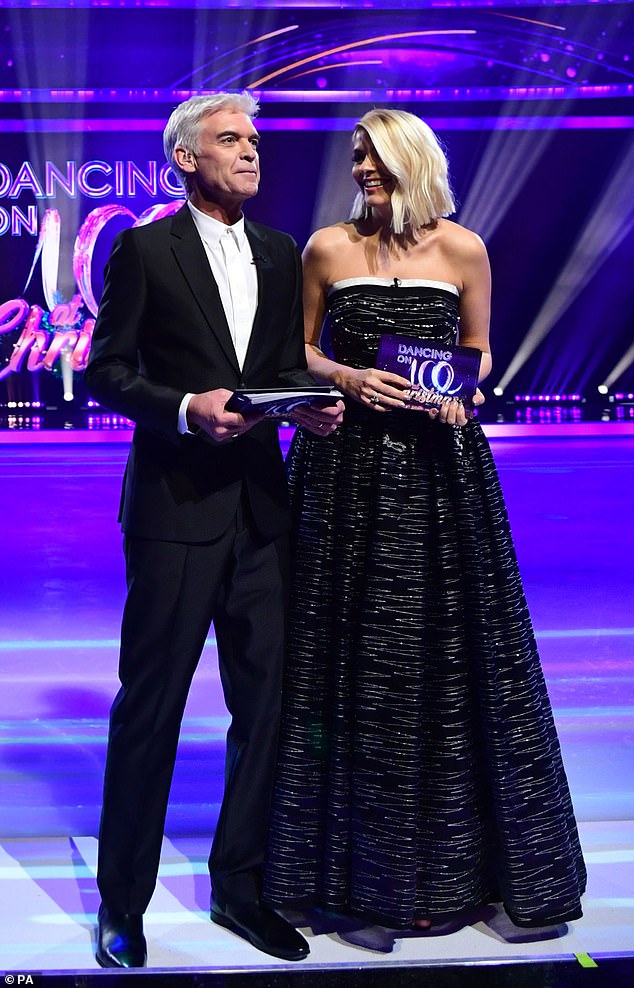 Back together: Holly and Phillip quashed speculation as they reunited for the launch of Dancing On Ice, which is set to air this year 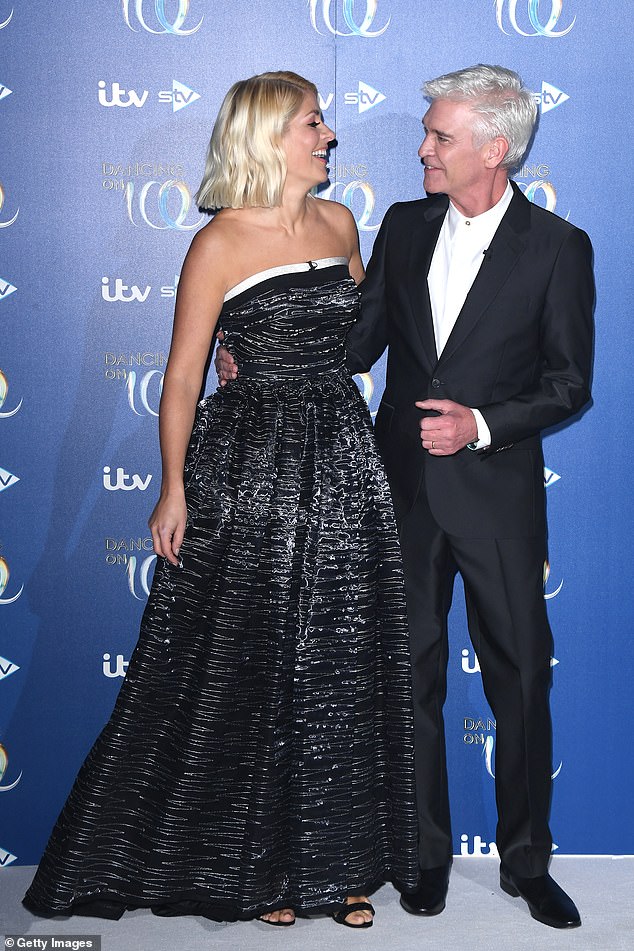 Dressed to impress: Holly cut a glamorous figure in a strapless black dress which was adorned with silver stitching, while Phil cut a dapper figure in a sharp black suit and white shirt 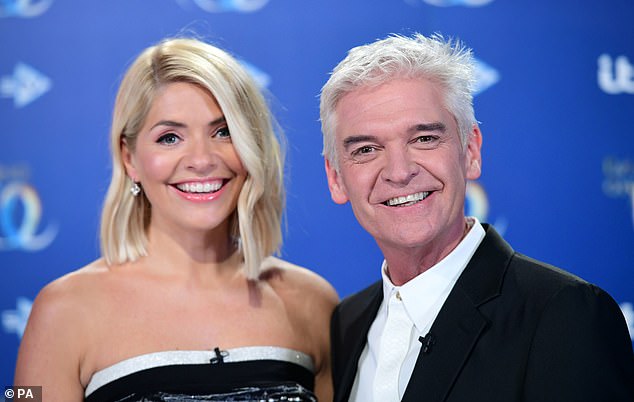 Say cheese: The hosts looked a little awkward as they posed for photos and smiled nervously before this year’s celebrity line-up worked the camera

Martin Frizell, Editor of This Morning explained: ‘I spend hundreds of days a year in their company and what you see is what you get, a genuine friendship from a couple who are both spontaneously funny and professional.

‘We have the smartest viewers watching telly and believe me they would be the first to notice any issues – they haven’t because there are none.’

The Mail on Sunday revealed relations on set are said to be so bad, Ruth and husband Eamonn snubbed the show’s Christmas party to avoid Phillip, after a series of behind-the-scenes rows, with the silver-maned ITV stalwart being described as ‘rude’.

Ruth and Eamonn host the Friday episode of This Morning and sit in for other presenters’ holidays, but were surprisingly absent last week from the no-expense-spared dinner at a West London restaurant where 23 of their colleagues enjoyed a four-course meal and champagne to celebrate the holiday season. 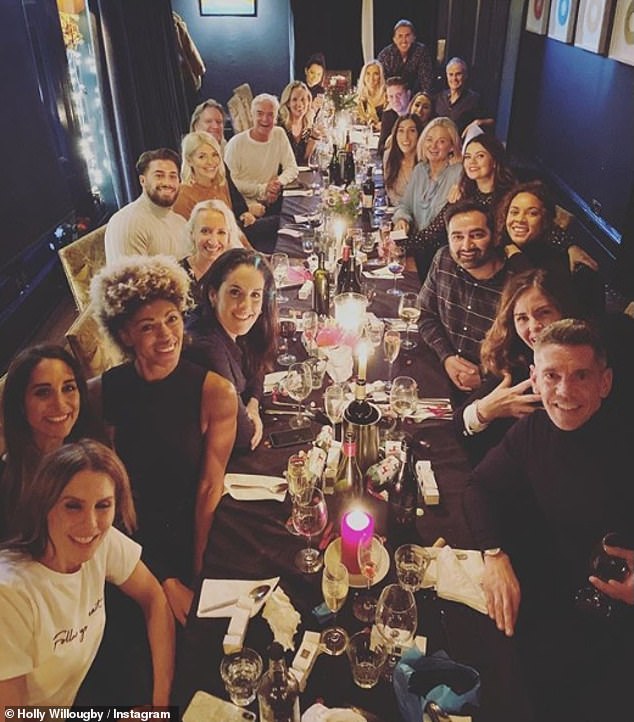 Missing: Holly shared a snap form the This Morning Christmas party on Instagram in which regular Friday hosts Ruth and Eamonn were nowhere to be seen

The tension between Ruth and Phillip stems from April when they spoke over each other while she was doing a live preview of Loose Women, which she also hosts.

As he cut her off abruptly, saying: ‘We’re a bit tight for time at this end,’ she retorted: ‘I only had about two more words to say, don’t worry.’

Since then, it seems relations between Phillip, Ruth and a protective Eamonn have only deteriorated.

The rift is causing anxiety at YMU, the agency formerly known as James Grant, which represents all four. 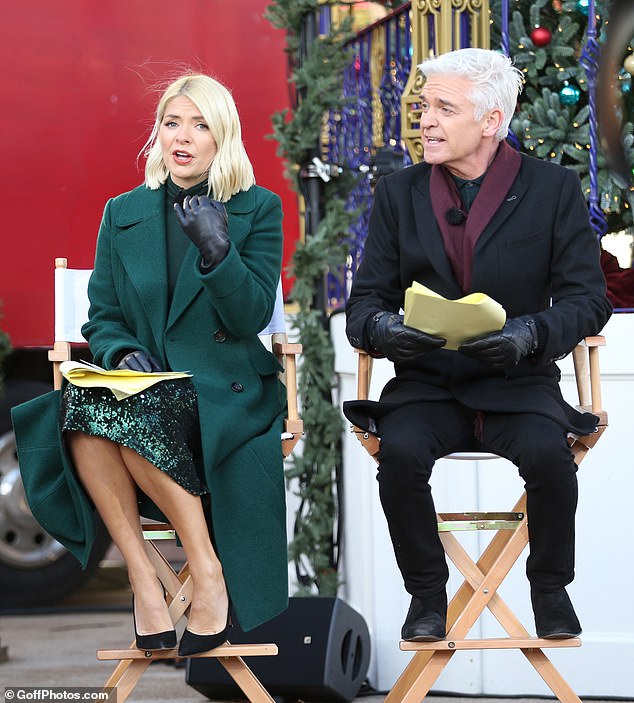 The show must go on: The pair continued to adhere to their hosting duties despite the feud rumours

It is also understood that Phillip is playing down Ruth’s grievance over being cut off by insisting it was the fault of the show’s production team.

A source revealed: ‘There are an increasing number of presenters who say that when the cameras aren’t running the atmosphere is toxic.

‘Phillip is a man with high standards, he has survived a long time in the TV world. There has been an almighty clash. There is currently one household name on ITV daytime who refers to him as “the c***”.’

Phillip, who joined This Morning in 2002, is also said to be envious that Eamonn, 60, was given an OBE last year for services to broadcasting. 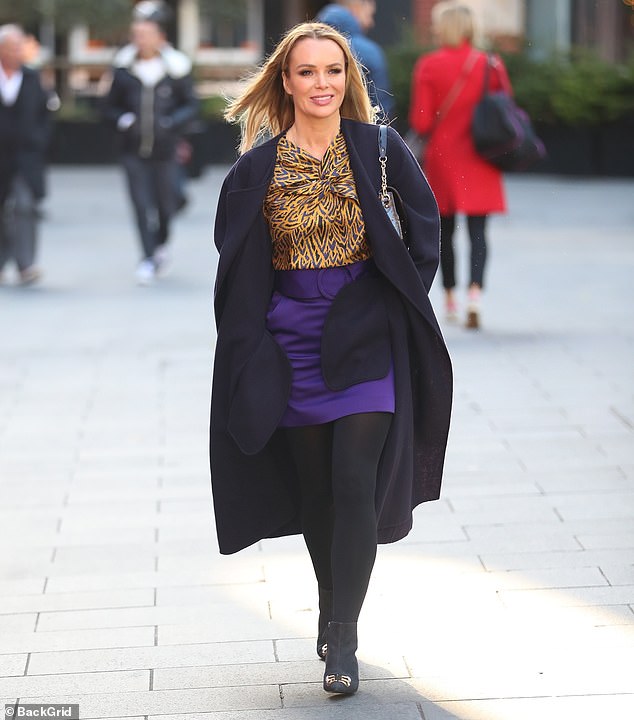 Speaking out: Earlier on Monday, Amanda Holden weighed into the latest controversy surrounding Phillip by praising his This Morning co-hosts for standing up for themselves

Despite the controversy, Phillip has taken to Twitter to thank fans for voting for This Morning to win an I Talk Telly award – seemingly ignoring the recent rumours about him causing a ‘toxic’ atmosphere on set.

The presenter posted the video with the simple caption ‘Thank You’, in which he gushes about his and Willoughby’s fans, accepting the award for the fifth consecutive year.

MailOnline contacted a representative for further comment at the time of publication.

Earlier on Monday, Amanda Holden weighed into the latest controversy surrounding Phillip by praising his This Morning co-hosts for standing up for themselves amid a slew of alleged complaints regarding his behaviour. 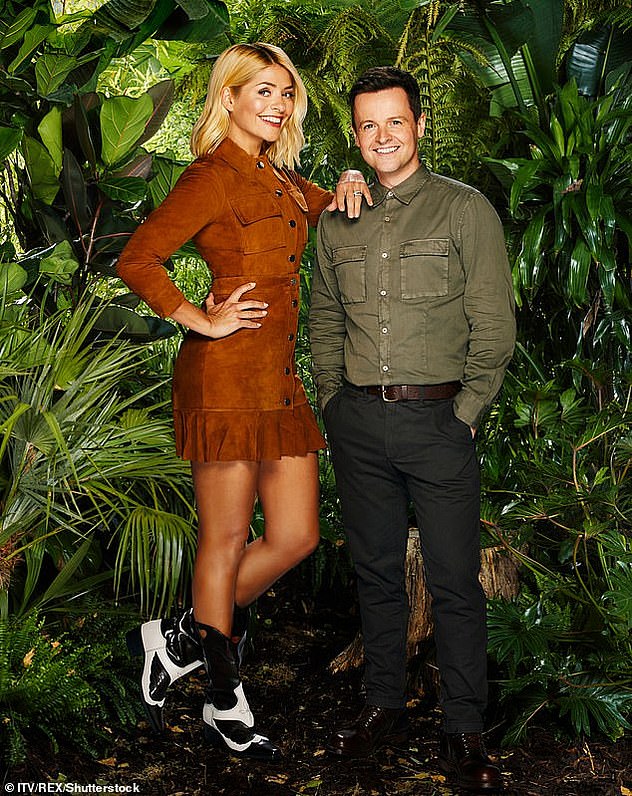 Claims: Phillip is reported to have been furious at Holly (pictured with Declan Donnelly) for landing a presenting role on I’m A Celeb while Ant McPartlin recovered from alcohol issues

The presenter, 48, previously hit out at Phillip over claims he blocked her from filling in for regular co-host Holly while she spent three weeks in Australia presenting I’m A Celebrity… Get Me Out Of Here!

Addressing the latest claims on her Heart Radio show, Holden insisted she had moved on from her own spat with Phil, but conceded it may well have lit a fuse.

‘Listen, I’ve drawn a line under all those issues with Phillip,’ she told fellow presenter Jamie Theakston.

‘I’m just going to say I really admire anyone that’s going to stick up for themselves because it’s not an easy thing to do.

‘There’s a tin opener and a can somewhere and other people have found the tin opener. That’s all I’m saying.’

Speaking to The Sun, insiders previously revealed that Holden believed he scuppered her chances of filling in on This Morning during her absence in November and December 2018.

It’s understood that she headed to the top by lobbying ITV executives over the animosity after he allegedly pushed for former Saturdays star Rochelle Humes to take the job.

A former daytime TV executive told the publication: ‘Phillip actively campaigned for Rochelle Humes to get the job despite Amanda being more experienced – and having been told privately she’d got the gig.’

And addressing the host on Heart Radio in June, Amanda alluded to a rift when revealing the three things things she wouldn’t like to find in her home, flippantly telling fans: ‘Spiders, flies and Phillip Schofield.’ 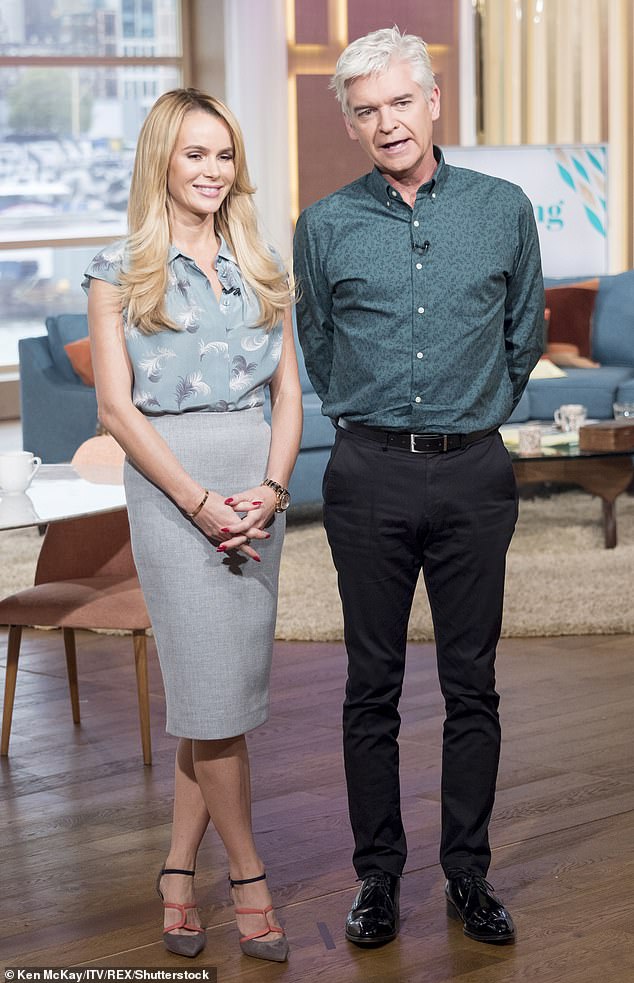 Claim: The 48-year old previously hit out at Schofield amid claims he blocked her from filling in for regular co-host Holly while she co-hosted I’m A Celebrity (pictured in 2015)