Justin Bieber and Hailey Baldwin stepped out to West Hollywood hotspot Catch for a romantic evening out on Feb. 26!

Hailey Baldwin, 24, looked straight off the runway on a date night with husband Justin Bieber, 26. The BareMinerals model sported the sleek, high-slit black “Gia” dress by designer The Andamane ($419) for her evening at West Hollywood’s Catch on Friday, Feb. 26. The ensemble featured long sleeves and a cut-out to create a cropped effect. Justin lovingly placed his arms on her waist as they walked back to their car after dinner. 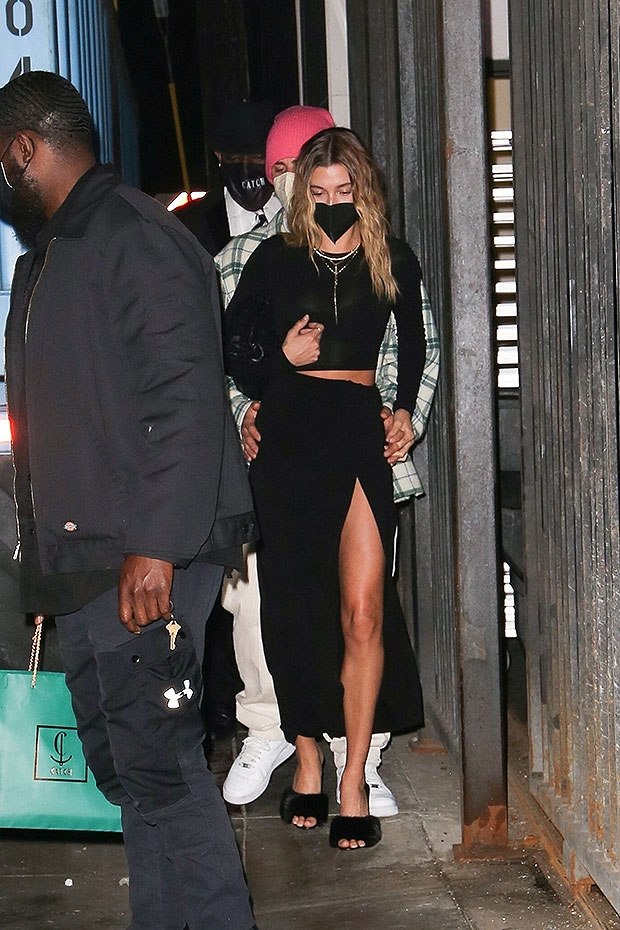 Hailey — who also recently appeared in an Ivy Park X Adidas campaign — added a ’90s inspired pair of Yves Saint Laurent’s “LA” mules ($1,095) to her feet and held onto a woven pouch bag by Bottega Veneta ($2,500). Hailey has proven to be a fan of both designers in recent months, frequently wearing bags and clothing from Bottega Veneta, as well as head-to-toe YSL looks styled by Maeve Reilly. For her night out at Catch, she also added a the “Zoe” necklace from Anita Ko ($15K) as well as the “Diamond Infinity Y” necklace by Shay Jewelry.

It appears Hailey changed her mind on which handbag to use for the evening as she shared a different one on Instagram just before heading out! The 24-year-old glowed as she held up Versace’s “La Medusa” small handbag ($1,695) featuring the brand’s signature logo and chunky gold chain. For his part, Justin also channeled the ’90s with a cream pair of corduroy pants, a green plaid shirt and hot pink beanie out to Catch. Both Hailey and Justin sported mandatory face masks due to the COVID-19 pandemic at the seafood hotspot, which is frequented by celebrities.

Recently, the Changes singer took to social media to compliment his wife’s latest project! Hailey rocked several ensembles from Beyoncé’s latest Ivy Park drop — titled “Icy Park” for it’s ski and snow theme — with Justin writing “Um that’s a yes for me” on her miniskirt look. “Ahhh. So grateful and happy to be a part of this campaign!” Hailey gushed in her Instagram caption. “Thank you @weareivypark @adidas Thank you to the queen for having me @beyonce!” she added. In other photos, she also modeled a monochrome brown ensemble including a sold-out bucket hat as well as hot pink short-shorts. It’s so sweet to see Justin supporting Hailey’s work!