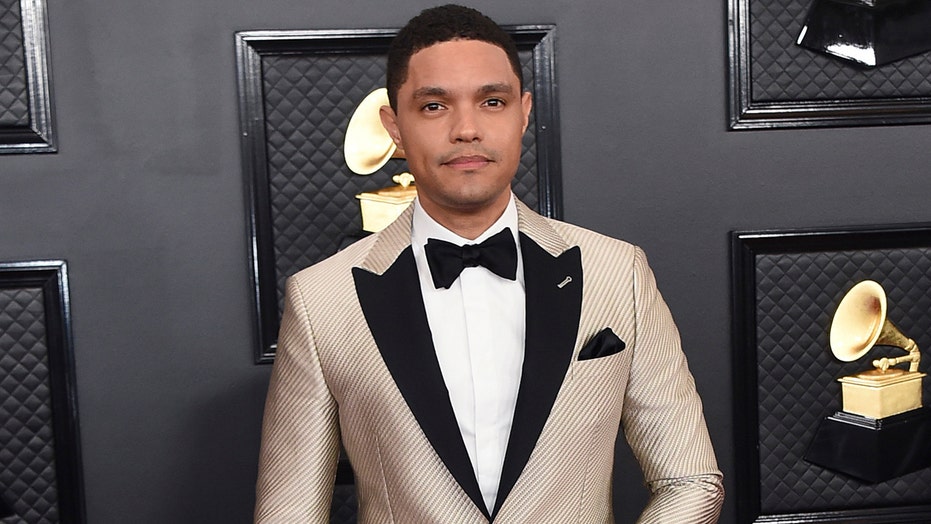 While discussing the COVID-19 protocols in place for the show, Noah, 37, stood on a stage outside of the Staples Center in Los Angeles, showing that he will be hosting the show in front of an “open elegant air tent” with socially distanced tables where some stars of the night will be sitting.

In a show he promises will be “different” due to the unprecedented coronavirus pandemic, Noah said music’s biggest night will “bring us all together as only music can.”

“The white stuff going up people’s noses is cotton swabs,” Noah cracked. “Right now there’s more tension in that tent than at the family reunion at Buckingham Palace.”

GRAMMYS 2021: ARTISTS WHO COULD MAKE HISTORY WITH WINS FOR THEIR MUSIC THIS YEAR 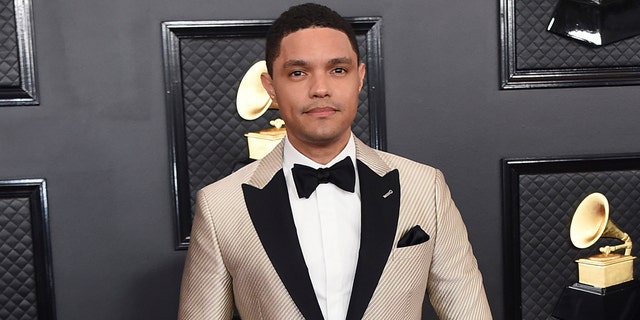 Noah also promised the awards show will be the “biggest” outdoor entertainment night of the year “besides the storm of the Capitol.”

The show then opened with British singer Harry Styles performing “Watermelon Sugar” and following him was 19-year-old chart topper Billie Eilish who performed her hit, “Everything I Wanted.”

Up next was musical trio Haim with their first-ever Grammys performance.

Rapper Megan Thee Stallion took home best new artist, the first award of the night. Presented to her by Lizzo, Megan assumed the outdoor stage in shock. She thanked God “for putting life into my body for me to be able to even be here today.” She then honored her late mother.

“I really want to say thank you to my mama. I know she’s with me here in spirit. She always knew I could do this,” the female rapper said. “Thank you so much.” 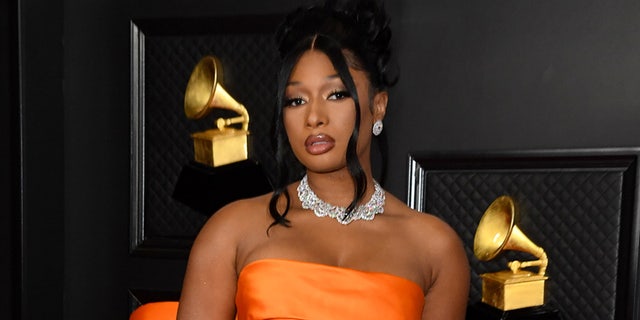 Miranda Lambert took home the award for best country album for “Wildcard.” She was helped up on stage for her acceptance speech by her husband, Brendan McLoughlin. Styles also made history as the first member of One Direction to win a Grammy for best pop solo performance for “Watermelon Sugar.” 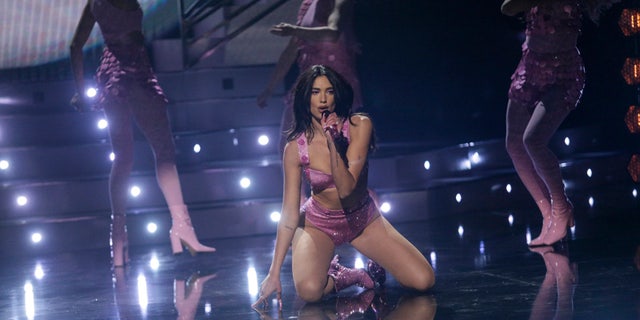 Taylor Swift put on an elaborate performance featuring a medley including songs “cardigan, “august,” and “willow.” The singer wore a long-sleeved metallic dress on the stage, which was transformed into a forest, fitting for the theme of her “Folklore” and “Evermore” albums.

This year’s show also featured a spotlight on independent music venues who have been affected by the lack of concerts due to the pandemic. Multiple awards were presented by owners of venues across the United States. 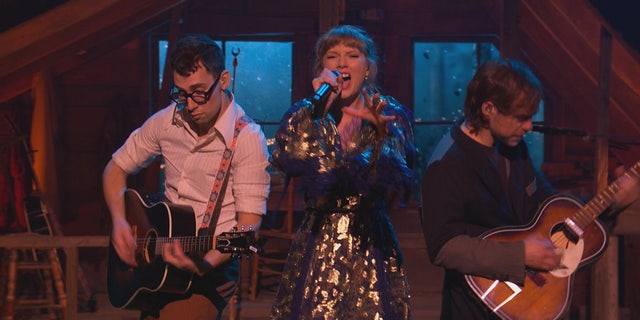 Taylor Swift performs three of her hits from her latest albums at the Grammy Awards.
(Screen Grab/CBS ©2021 CBS Broadcasting, Inc.)

The 2021 Grammys also featured an in memoriam segment in honor of the artists who passed away in the last year.

“During this past year, unlike any other, the loss of life has been historic,” Noah said. “Tonight, we want to remember the enduring impact of those in our music community we have lost this year. That loss has been immense.”

“We all thank you, John, for everything,” Carlile said while performing in honor of the late folk and country icon John Prine, who died of COVID-19 complications last April. 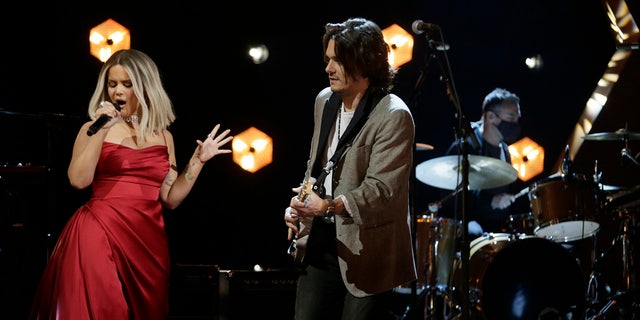 The artist said she was “speechless” and noted she recorded the song herself “in my bedroom at my mom’s house.”

“We are the change that we wish to see and that fight that we had in us in the summer of 2020, keep that same energy,” H.E.R. told viewers.

Megan Thee Stallion wowed viewers with a dance-filled performance of her hit “Savage” while wearing a shiny number. She was followed by a colorful performance by female rapper Cardi B with her new single, “Up.” The artists then joined forces for a routine of their 2020 megahit, “WAP.”

“Wow, wow, wow! Did you see that?” Noah excitedly said following the performance while standing on an oversized bed that the female rappers danced provocatively on. 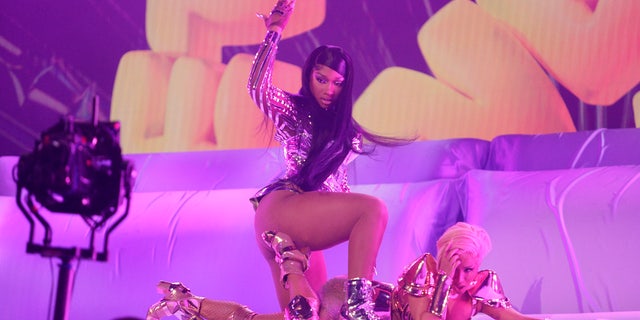 Minutes later, Megan took the stage once again to accept the best rap song award for her remix of “Savage” featuring Beyonce.

Beyonce then made Grammys history when she took home the award for best R&B performance. The win, included with her others of the night, makes Queen Bey the most decorated female act in Grammy history with the most Grammy wins ever by a female artist, surpassing Alison Krauss who formerly held the record with 27 wins.

“As an artist I believe it’s my job and all of our jobs to reflect the times and it’s been such a difficult time so I wanted to uplift, encourage and celebrate all of the beautiful Black queens and kings who continue to inspire me and inspire the whole world,” Beyonce said.

She also shouted out her daughter Blue Ivy. The mother-daughter duo snagged the award earlier in the night for best music video for “Brown Skin Girl,” making Blue, 9, the second youngest to win a Grammy.

“I’ve been working my whole life since 9 years old and I can’t believe this happened. This is such a magical night,” Beyonce continued in her speech while wearing an off-the-shoulder black leather dress. “I know my two daughters and son are watching. Blue, congratulations. She won a Grammy tonight. I’m so proud of you and I’m so proud to be all of your mommies.”

She also delivered a special thank you to her husband, Jay Z, who was also in attendance, calling him her “rock.” 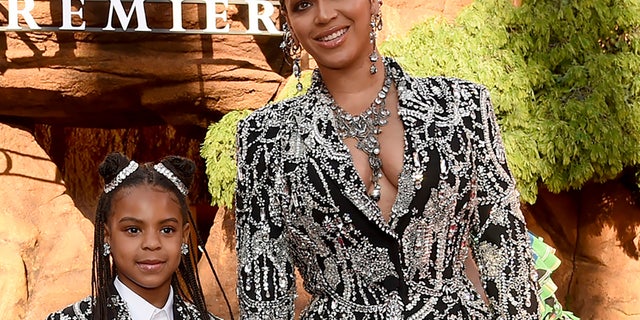 Beyoncé, this year’s leading contender with nine nominations, won two honors during the pre-ceremony including best rap performance for ‘Savage’ with Megan Thee Stallion and best music video for ‘Brown Skin Girl.’ She shares the latter with daughter Blue Ivy Carter. At 9 years old, she’s the second youngest to win a Grammy.
(AP)

Swift, dressed in a floral dress thanked her collaboraters and also gave a special shout-out to her boyfriend, Joe Alwyn.

“Joe who is the first person who I play every single song I write. I had the best time writing songs with you in quarantine,” she said before also thanking her fans. 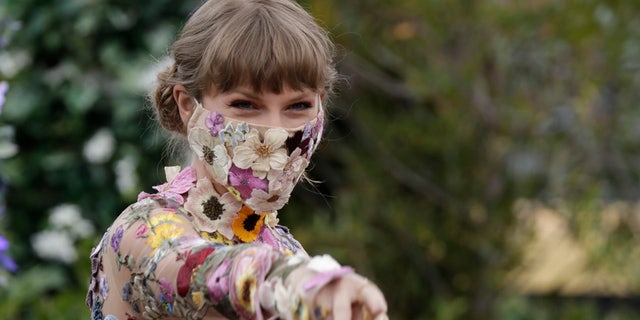 Taylor Swift took home the award for album of the year at the 2021 Grammys.
(Cliff Lipson/CBS ©2021 CBS Broadcasting, Inc.)

This year’s Grammys are notable for the fact that, for the first time in Grammy history, every nominee for best country album and best rock performance is a woman or is a group that is fronted by a woman.