Yolanda Hadid is one proud grandma. Ever since daughter Gigi Hadid welcomed her first child with boyfriend Zayn Malik, Yolanda has been spoiling her new granddaughter with lots of love. And lucky for us, she’s been posting sweet pics on the ‘gram, so we can all gush over the super cute fam.

She recently posted a photo to her Instagram Stories of Gigi kissing her baby girl’s head. She used the GIF, “You are my sunshine,” to describe the adorable photo. 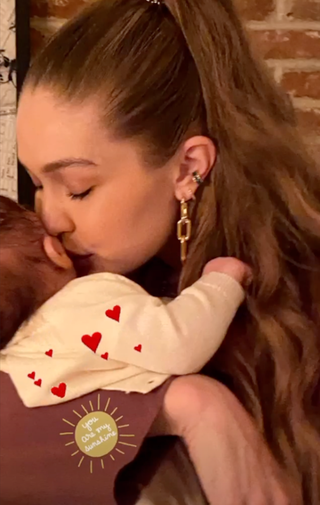 Gigi and Zayn confirmed the birth of their first child together in September, a week after her father, Mohamed Hadid, accidentally made fans think she already gave birth. TMZ was the first to report the news that Gigi is having a baby with Zayn, but it was Yolanda herself who revealed the sex of Gigi and Zayn’s baby. She spoke on Dutch TV program RTL Boulevard and confirmed the news.

According to a previous report from E!, the family is doing well since the birth. “Everything went smoothly and she [Gigi] is recovering at her penthouse,” a source said. Gigi is surrounded by both of their families and “is on a high and can’t believe they created an angel. She’s truly so in love and has had many emotional moments while holding her baby girl.”