Home » Celebrities » First an E-ZPass, Then the Diamond Ring

The night Millicent Cooley celebrated her 58th birthday and Anthony Duncan dropped to one knee and pulled out a small box from his pocket, party guests held their breath.

“This was in May 2013, and Tony and I had only been dating six months,” said Ms. Cooley, who was living in Morristown, N.J., at the time. “I remember thinking, he couldn’t be proposing. Why is he holding this little box out in front of my friends and parents and neighbors?

“Then he said, ‘Millicent, if you accept this gift from me, you’ll make me the happiest man in the world.’”

When Ms. Cooley discovered an E-ZPass transponder instead of a diamond ring, she let out a laugh. It was the kind of laugh her longtime friend, Nancy Wartik, called “a loud, guileless, joyful sound.” She didn’t give the prospect of getting engaged another thought. She was turning 58, after all, and had made her peace with the likelihood that she would be single all her life. 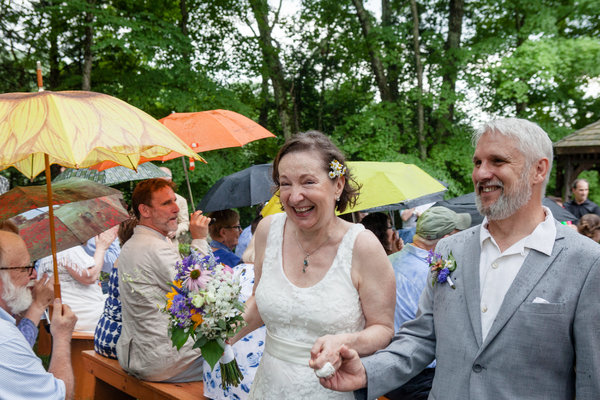 Mr. Duncan’s E-ZPass gag was meant to reinforce his commitment to driving four hours from his home in Brattleboro, Vt., each week to see her in New Jersey. (He had E-ZPass; she didn’t.)

Mr. Duncan, 60, is a professional juggler and circus arts teacher. In addition to coordinating seven balls in the air while walking a tightrope, he can juggle flaming torches blindfolded, and sometimes juggles a knife with piece of cheese on the end while being held in the air by six people (called “the dinner of death,” the stunt involves him eating the cheese off the knife). Before he started juggling in the late 1970s he studied astrophysics at the University of Rochester and evolutionary biology at George Washington University. Though he never earned a degree, science and books have been lifelong passions, along with politics.

Mr. Duncan’s father, Richard Lee Duncan, was a career diplomat for the State Department who worked in developing nations including Pakistan and Cuba, where Mr. Duncan was born. His mother, Eleanor Shultz Duncan, was a stay-at-home parent.

Though he was well into the career that would win him the 1994 International Jugglers’ Association competition by the time he met Ms. Cooley, it was his depth of political knowledge, not his skill at keeping flaming batons aloft, that he thought would impress her most.

The two met in 2012 on Election Day. They had gathered in the Manhattan living room of Ms. Wartik and her husband, Dennis Overbye, to watch the presidential election returns.

“I was one of the vocal people in the room, giving my opinion of what was going on,” Mr. Duncan said. While watching the televised results, he was also stealing glances at Ms. Cooley, who was less vocal, though equally hopeful President Obama would serve another term.

“I was on the hunt for a girlfriend,” said Mr. Duncan, who was married from 1994 to 2016 to Jaki Reiss, with whom he had no children. “I was separated and single and interested in the possibility of relationships.”

The prospect of romance never entered Ms. Cooley’s mind that evening. For one thing, “I was jet-lagged,” Ms. Cooley said. “I had just come off the plane from London.”

Ms. Cooley, now 65, designs websites, software and apps, and was working for The Economist magazine at the time and traveling regularly.

Another reason she didn’t consider flirting with Mr. Duncan at the election party was simply because she was out of practice. “It had been several years since I had dated anybody,” she said. “As I got older, I found it harder to meet men, and I began to lose confidence.” There was also a third reason: Mr. Duncan had arrived with a date — or so she thought.

“Tony was with this young, beautiful woman,” she said. The woman, Kelsey Strauch, was a former juggling student and performing partner who had moved to New York. “I wanted to introduce her to people outside the juggling community,” Mr. Duncan said. By the time they left that night, Ms. Cooley was sure Mr. Duncan was someone she wanted to get to know better.

“I thought, ‘Oh, he’s really interesting,’” she said. “I never knew a juggler before.” The next day, Ms. Cooley emailed her friend Debora Munczek, who had invited Mr. Duncan to the party. “I said, kind of trying to feel her out, that I thought he and his woman friend would both make interesting friends, just as people. I didn’t know if he was available.” Ms. Munczek forwarded Mr. Duncan that email, hoping to connect the two, and minutes later he composed his own email to Ms. Cooley.

Weeks of getting-to-know-you emailing and texting between Ms. Cooley and Mr. Duncan followed. Then finally, Mr. Duncan asked, “Do you think it would be O.K. if we had a phone call?”

By then, Ms. Cooley had figured out that Mr. Duncan might want to be more than friends. “At some point he had sent me this picture of himself juggling as a young man with long hair, cutoff jeans and rippling abs,” she said. “I was like, I think this guy is flirting with me.”

On Dec. 1, 2012, Mr. Duncan started giving his E-ZPass the workout it would become accustomed to. He and Ms. Reiss still owned a house together in Brattleboro, though they were separated and in the process of divorcing. Ms. Cooley was splitting her time between her home in New Jersey and a family apartment in Manhattan’s Tudor City. Their date started in Tudor City. From there, they walked to a restaurant for lunch.

“We talked, and we talked some more, and then we came back and we were still talking, and I think we both never wanted it to end,” Ms. Cooley said. But she wasn’t sure what to expect once they said goodbye.

“At first, I assumed this new romance would fade away in a few months,” she said. “After all, his career and lifestyle as a juggler were the opposite of mine.” Plus, he lived four hours away working for the New England Center for Circus Arts.

She also had some lingering insecurity about dating. “I had been in love but never married, and had grudgingly accepted romantic loneliness while keeping my head down, developing a career.”

But Mr. Duncan “began driving back and forth between Vermont and New Jersey, usually weekly, in order spend time with me,” she said. He got to know her family, including her late father, Kenneth Cooley, and her stepmother, Foy Cooley.

Ms. Cooley and Mr. Duncan were in New York together, attended juggling conventions, like an early one in Austin, Tex., where she remembers being awe-struck by a roomful of 100 jugglers riding on unicycles or balancing on 10-foot balls. They also traveled to far-flung places like Cambodia and the Costa Rican jungle.

Mr. Duncan started dropping hints about getting married. But Ms. Cooley, used to being single, wasn’t sure. Living together seemed a safer next step, so in 2017, they moved together to Saugerties, N.Y., about halfway between New Jersey and Vermont.

“We were getting to the point where we wanted to spend as much time together as possible,” Ms. Cooley said. But even in Saugerties, they were constantly on the road. Mr. Duncan was commuting to Vermont for work, and Ms. Cooley was regularly visiting her father, who was ill, in New Jersey. When he died in May 2018, she felt less tethered geographically and open to substantial life changes. (Ms. Cooley’s mother, Martha Curtis Cooley, is also deceased.)

She decided she had been a web designer long enough. “I had been doing that work for 20 years, and I wanted to turn a new page in my life,” she said. She left a job at Merck & Company and started consulting while exploring new career paths and relocating.

In December 2018, Ms. Cooley and Mr. Duncan bought a contemporary, all-electric house in Brattleboro on three acres of forested land two miles from the New England Center for Circus Arts.

“I’ve owned a condo before, but never owned land, and I’ve totally thrown myself into the life here,” said Ms. Cooley, who has welcomed magazine photographers onto the property, and has already built a fire pit and designed a woodland garden there.

Even before the move her attitude about marriage was slowing changing. “One night Millicent and I were in bed, and she turned to me and said, ‘You know, I’ve been thinking about what it would be like to be married,’” Mr. Duncan said.

“I had been picturing myself,” Ms. Cooley said. “Would I be happy? Is this something I would like? Tony and I talk about everything, so I decided to just say it.”

Mr. Duncan convinced her she would, in fact, like it. “We sort of just slid into engagement,” he said. But it wasn’t necessarily in a carefree way, because he was still sorting the details of his divorce from Ms. Reiss. They waited until Mr. Duncan’s 60th birthday party, at circus center in September, to share the news. Weeks later, they were planning a wedding at the Ashokan Center in Olivebridge, N.Y., where clown shoes might not seem out of place.

Ms. Cooley and Mr. Duncan have been making a summer stop at Ashokan since 2013, when Mr. Duncan started performing there as part of the Summer Hoot Music Festival. In its inaugural year, Mr. Duncan performed backstage for the folk singer Pete Seeger, months before he died.

A few minutes into a short outdoor ceremony held near a gazebo, Mr. Overbye had to surrender his microphone to audio problems. Then rain started falling. Guests, seated on long pine benches, huddled under umbrellas as vows were read by the couple. She wore a long white dress and shiny flip-flops and was attended by her sister, Eileen Cooley; the groom, in a light gray suit and sneakers, stood with his nephew Eric Dimick Eastman by his side.

The rain did not dilute the potency of their sentiments.

“I promise to listen deeply and often to what you say,” Ms. Cooley said.

“I promise to keep trying to make you laugh when it will help, and to help you cry when you need to,” Mr. Duncan said through tears.

Before they were pronounced married, Mr. Duncan sang Ms. Cooley a song, Joni Mitchell’s “All I Want,” with slightly altered lyrics. “I want to make you feel free,” went the closing line.

Where The Ashokan Center, Olivebridge, N.Y.

Step Right Up Just after Ms. Cooley and Mr. Duncan had their first kiss as a married couple, seven of Mr. Duncan’s juggler friends hopped from their seats to perform a short “21 club salute” juggling routine.

Shelter From the Drizzle After the ceremony, guests ducked into the Ashokan Center’s great room for a cocktail hour, followed by a buffet dinner of flank steak and salmon with mango sauce.

Amicable to the End Mr. Duncan’s ex-wife, Jaki Reiss, attended the wedding. During a speech, his sister, Laurie Dreamspinner, praised Ms. Reiss for preparing her brother to be a good husband to Ms. Cooley. “Call me, Millicent,” Ms. Reiss shouted good-naturedly during Ms. Dreamspinner’s remarks. 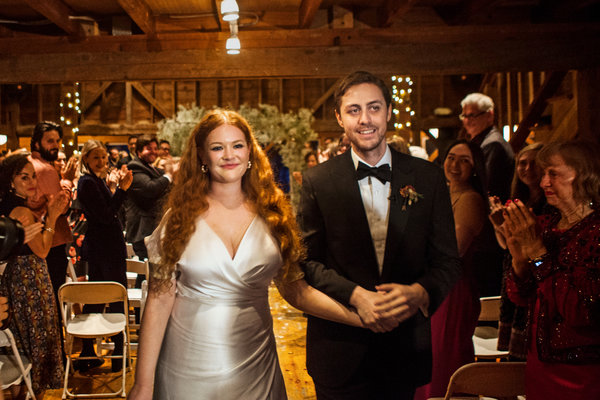 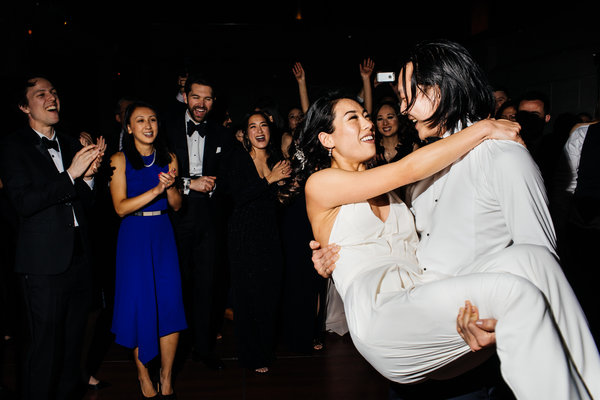