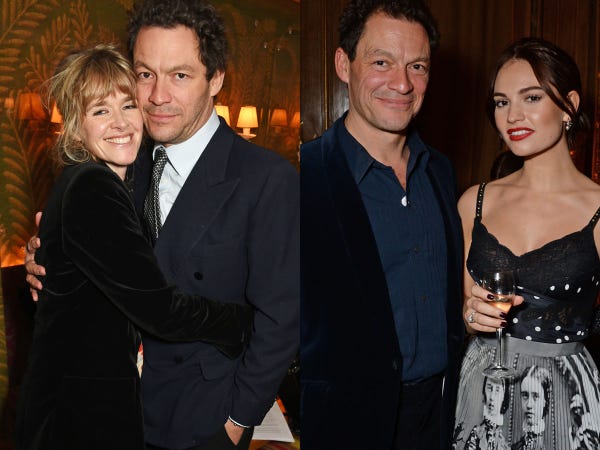 Dominic West and his wife Catherine FitzGerald are clearing the air.

The actor and the landscape designer, who've been married for 10 years, posed for the press, kissing outside their London home on Tuesday — just days after West was seen kissing his "The Pursuit of Love" co-star Lily James in Rome.

The couple, who shares three children together, also handed the paparazzi a handwritten note that read, "Our marriage is strong and we're still very much together. Thank you."

Insider reached out to James for comment, but didn't immediately hear back.

Fans began speculating about a romance between "The Pursuit of Love" co-stars after the Daily Mail published photos of the actors looking cozy together in Rome on Sunday.

In the pictures, West and James, 31, were seen riding through the Italian capital on a scooter together and sitting down next to each other for lunch outside. According to multiple sources, they were eating with their friend and manager Angharad Wood. At one point, West leaned over and appeared to kiss James' neck at the restaurant.

According to the Daily Mail, "The Affair" actor wasn't wearing his wedding band, raising eyebrows about his status with FitzGerald.

James and West first worked together on the 2011 play "Othello" in Sheffield. They then reunited for BBC's miniseries "The Pursuit of Love," which is based on Nancy Mitford's 1945 novel.

James previously dated her "Pride and Prejudice and Zombies" co-star Matt Smith for five years before calling off their relationship in December. They briefly rekindled in May and were seen on a stroll in London, but decided afterwards to permanently part ways.

In July, the "Mamma Mia! Here We Go Again" actress was seen around London with "Captain America" star Chris Evans several times — first leaving a private club and then laying down together in a park during an apparent ice cream date.

Their outings feuled romance rumors, but James remained tight-lipped about her love life and never confirmed the supposed relationship.

During her interview with Harper's Bazaar in September, James refused to speak about where she stands with Evans.

Instead, she said, "Don't be obsessed by boys! Hang out with your girl mates. And don't take everything so seriously – be kind to yourself."