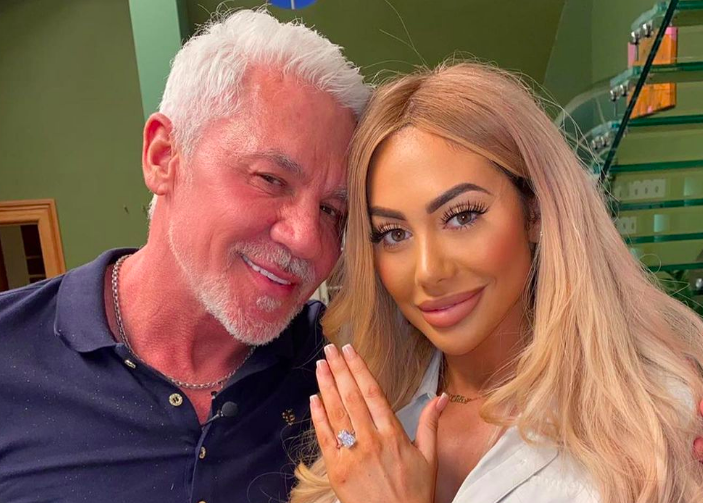 In a year that Kimye filed for divorce and two influencers went to war after both calling their babies Baby, Wayne Lineker and Chloe Ferry’s engagement is still up there with the most surprising showbiz stories of the year.

The Celebs Go Dating stars announced last night that they are engaged, with Wayne, 58, writing on Instagram: ‘She said YES! Love you @chloegshore1.’

The union has raised a lot of eyebrows, not least because Wayne is 33 years older than his 25-year-old girlfriend.

Others have questioned if the romance is genuine, including Celebs Go Dating’s Tom Read Wilson, who said on Capital Breakfast: ‘I have to say I’m not sure it’s real, when I was speaking to your divine producer this morning that was the first I’d heard of it! Honestly you could have knocked me down with a feather, I could not be more surprised.’

If the pair are set to tie the knot, Chloe has a lot to live up to.

Last September, a ‘tongue in cheek banter’ Instagram post from Wayne went viral, in which he laid out the criteria for his dream girlfriend.

As well as having a ‘strong nice loving personality’, the Ibiza club owner had a rather bizarre list of demands for whoever he ends up with.

So, we simply had to investigate into whether Chloe fits Wayne’s criteria, and if their love is a true match.

Chloe, 25, hasn’t publicly dated anyone three decades older than her before, but she has hooked up with Scotty T, 32, and Marty McKenna, who is a whole year older than her.

Sadly, Chloe is five years shy of 30, and will only turn 26 in August.

‘You must like to travel and to fly business class and stay in incredible hotels. Be prepared to give up your career or job or at least be able to work from a laptop on a tropical beach somewhere.’

Chloe jetted off to Dubai for New Year’s, despite restrictions on travelling during lockdown, so we reckon she’s just fine with travelling.

‘No baggage as mine are all grown up.’

No kids. Check for Chloe.

‘You must be able to cook as I love cooking, especially Waitrose ready made meals.’

We’re not sure about the Waitrose ready-made meals, but Chloe has filmed herself cooking on social media on multiple occasions and knows her way around a kitchen – once making cream cheese stuffed chicken wrapped in parma ham. Who needs microwave meals?

However, she also cut back her diet to delivery meal plans and boiled eggs to lose weight last year, so this may change.

‘You will need a driving license to share a Bentley and a Lamborghini Jeep (pending).’

Chloe has this in the bag, having passed her driving license test in 2017 – although it was claimed that she actually lied about passing the test first time, and that she had failed her theory test ‘at least three times’.

The star does actually have her own car too, after shelling out £93,000 on a Mercedes G-Class last year, so may have to make some compromises.

‘You must never have shared a teeth whitening post!!’

Awkwardly, Chloe fails on this one.