There’s nothing scarier than a cheerleader on a mission. At least, that seems to be what the new USA drama Dare Me is telling audiences. The show follows the super-intense lives of a group of competitive high school cheerleaders, with mean girl Beth at the center of it all. Beth tries to maintain her place at the top of both the pyramid and the social hierarchy of her squad through some extreme measures. But even though she can be a bit of a bully, Dare Me star Marlo Kelly hopes fans aren’t too hard on Beth.

Beth is undeniably terrifying. In the very first episode, she pulls a gun out at a party and begins a blackmail plot against her cheer coach (Willa Fitzgerald), and things only get messier from there.

"I think when we first meet Beth in the show, she’s at the height of her power and the captain of the cheer team," Kelly tells Elite Daily. "But I think we pretty quickly come to learn that underneath this very stoic facade that she puts on the outside, there’s a lot of vulnerability and pain and tenderness about her that’s kind of being covered up and controlled. I think she’s a very turbulent sort of character." 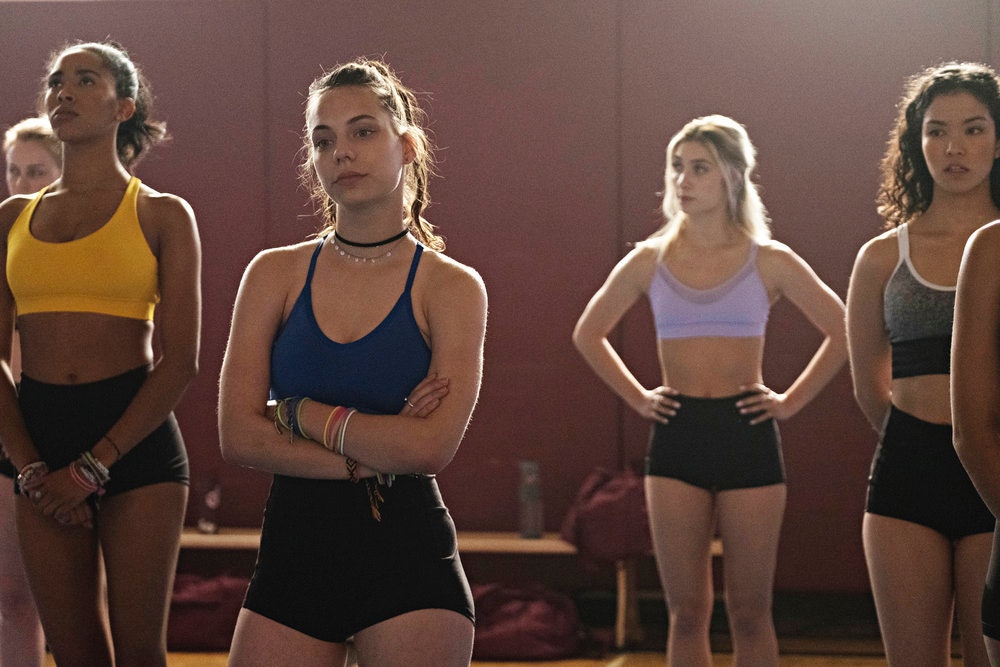 Beth’s intense demeanor fits the tone of the Dare Me, which Kelly calls "Fight Club meets Heathers." But even though Beth can be scary, Kelly thinks fans will understand more of what makes her tick after they spend more time watching her throughout the season.

"I hope they give [Beth] time," Kelly says about the show’s audience. "And I also hope that they sometimes look at her with some empathy. I think she deserves and needs some love. She can seem quite harsh on the outside but I think underneath there is actually a really beautiful person and I just hope that the audience sees that."

The beauty underneath Beth’s tough exterior comes through in Kelly’s nuanced performance. She fully embodies the softer side to Beth, especially in vulnerable moments with her best friend Addy (Herizen Guardiola). But she also has a little fun with her "mean girl" qualities. "I certainly would never want to be that person but getting to act it is very fun," she says. "[Beth] kind of gives you an opportunity to explore these really, sometimes, awful parts of what a human can be. But that’s sort of exciting in its own right because then at the end of the day you get to brush it off and go back to being a normal human."

Part of Kelly’s work in playing Beth involved talking to the woman who created her. Dare Me is based on the book of the same name by Megan Abbott, and the author now serves as an executive producer of the series.

"[Abbott] sat with us on set every day, so she was kind of available for conversation at any hour," Kelly says. "If there was a major plot point that we really wanted to discuss or something we weren’t sure about, she would take the time to sit with you one-on-one and really delve into the details of it. We spent a lot of hours just both geeking out over our love of Beth, which was really fun."

Part of what Kelly and Abbott explored was how Beth evolves over the course of the first season of Dare Me, which Kelly hints is a big part of the upcoming episodes.

"I think her realizations about what is important to her changes a lot," she says. "And the best way to deal with situations, [figuring out] what’s actually effective and what’s harmful and how to care for herself. I think that you see that kind of growth throughout the series."

In addition to depicting the cutthroat world of cheerleading, Dare Me also includes some shocking moments of violence. In addition to Beth’s incident with the gun in the first episode, the show hints at some bloody drama to come. Kelly won’t reveal too much about the mysterious flash-forward scene, or who’s responsible for what it hints at, only ominously saying, "I think that everyone has their part to play. I don’t think that anyone is innocent."

A second season of Dare Me hasn’t been announced yet, but Kelly is hopeful they’ll get more episodes, especially because Season 1 doesn’t tell the entire story of the book, so there is definitely more of the plot to mine.

"Another season would be amazing in regards to finishing out the rest of the book," Kelly says. "And the world that Megan’s created."

36 Secrets About The West Wing—Including What's Next

CW's Supergirl To End With Season 6

Two million homes to get access to NBN fibre-to-the-home in $3.5b plan