CNN’s Chief International Anchor shared the stunning news on June 14, the day she returned to work after a four-week absence.

Christiane Amanpour is receiving treatment for ovarian cancer. The 63-year-old CNN anchor shared the stunning news with her viewers on June 14, after returning to work after a month-long absence from her London-based post.

The mom-of-one calmly made the announcement while thanking her colleague Bianna Golodryga for holding down the fort while she was away. Amanpour admitted to viewers that the past few weeks have been “a bit of a rollercoaster for me, because during that time, like millions of women around the world, I’ve been diagnosed with ovarian cancer.”

The CNN veteran then began to fill viewers in on her treatment and urged them to make sure that they get regular checkups. “I’ve had successful major surgery to remove it, and I am now undergoing several months of chemotherapy for the very best possible long-term prognosis, and I am confident,” she said.

“I’m also  fortunate to have health insurance through work and incredible doctors who are treating me in a country underpinned by of course the brilliant NHS.” The NHS is a reference to the U.K.’s National Health Service, which provides free healthcare to all citizens, funded through taxpayers. 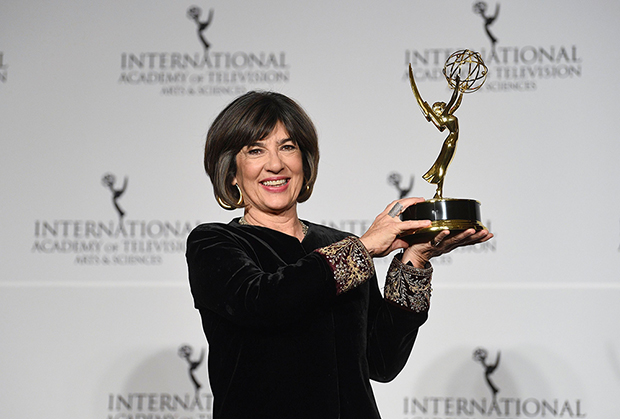 “I’m telling you this in the interest of transparency, but in truth really mostly as a shout out to early diagnosis to urge women to educate themselves on this disease to get all the regular screenings and scans that you can, to always listen to your bodies and, of course, to ensure that your legitimate medical concerns are not dismissed or diminished,” Amanpour added.

According to Cancer Research U.K. every year 7,443 of women are diagnosed with ovarian cancer in Britain. The disease has a 35 percent survival rate and, sadly, 4,182 British women die each year from the condition.

Amanpour’s announcement comes just weeks after cancer experts in the U.K. have sounded the alarm about missed cancer cases amid the COVID-19 pandemic. According to The Times of London, experts warned that the country faced a “ticking time bomb” after the latest figures revealed that 350,000 patients hadn’t been referred for hospital treatment.