The world is grieving the loss of Hollywood actor, Chadwick Boseman after news of his sudden passing sent shockwaves through the media on Friday, August 28th.

The beloved actor continued to make history even after his passing over the weekend, as Twitter revealed the announcement of Boseman’s shocking death via his twitter is the most ‘liked’ tweet in the website’s history.

The 43-year-old Black Panther star died after a secret four-year battle with colon cancer during which he was still acting in a handful of movies, never once letting on he was suffering any health problems. 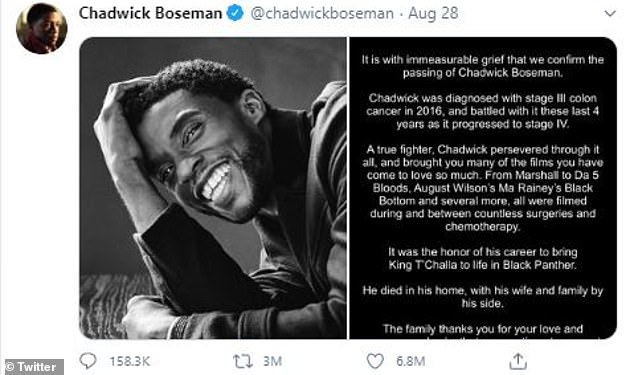 History maker: Twitter confirmed over the weekend that the announcement of 43-year-old actor Chadwick Boseman’s tragic passing is the most liked tweet in the site’s history having currently garnered 6.9M likes

Issuing a statement on behalf of the actor, his family wrote:

‘It is with immeasurable grief that we confirm the passing of Chadwick Boseman. Chadwick was diagnosed with stage III colon cancer in 2016, and battled with it these last 4 years as it progressed to stage IV. ‘

‘A true fighter, Chadwick persevered through it all , and brought you many of the films you have come to love so much. From Marshall to Da 5 Bloods, August Wilson’s Ma Rainey’s Black Bottom and several more, all were filmed during and between countless surgeries and chemotherapy’, they said. 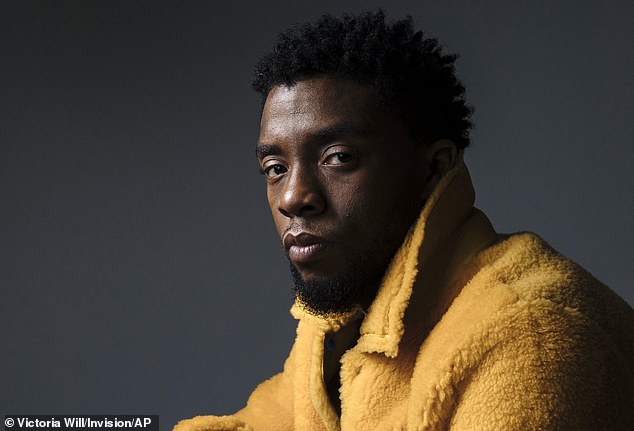 SUPERhero: The 43-year-old Black Panther star died after a secret four-year battle with colon cancer during which point he was still acting in many of his career-defining films 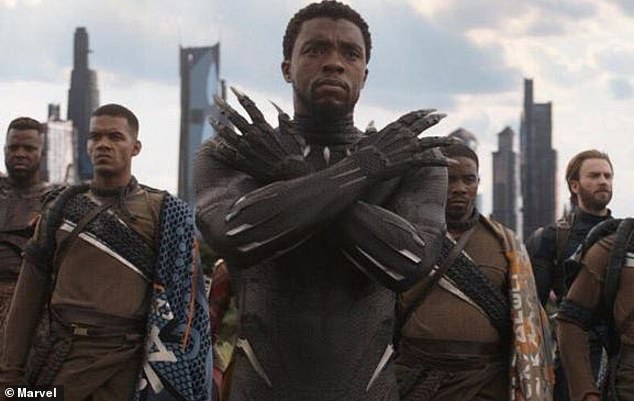 Black Panther: Chadwick’s role in the film Black Panther as King T’Challa propelled the film to be the first superhero film nominated for Best Picture at the Academy Awards

The family continued, ‘It was the honor of his career to bring King T’Challa to life in Black Panther. He died in his home with his wife and family by his side.’

The tweet concluded, ‘The family thanks you for your love and prayers, and asks that you continue to respect their privacy during this difficult time.’

The heartbreaking tweet accompanied by a black and white portrait of Boseman has accrued 6.8M likes and 3M retweets.

Previously, the record for most liked tweet was held by former US President, Barack Obama after he shared the famous Nelson Mandela quote, ‘No one is born hating another person because of the color of his skin or his background or his religion.’ That tweet garnered 4.3M likes. 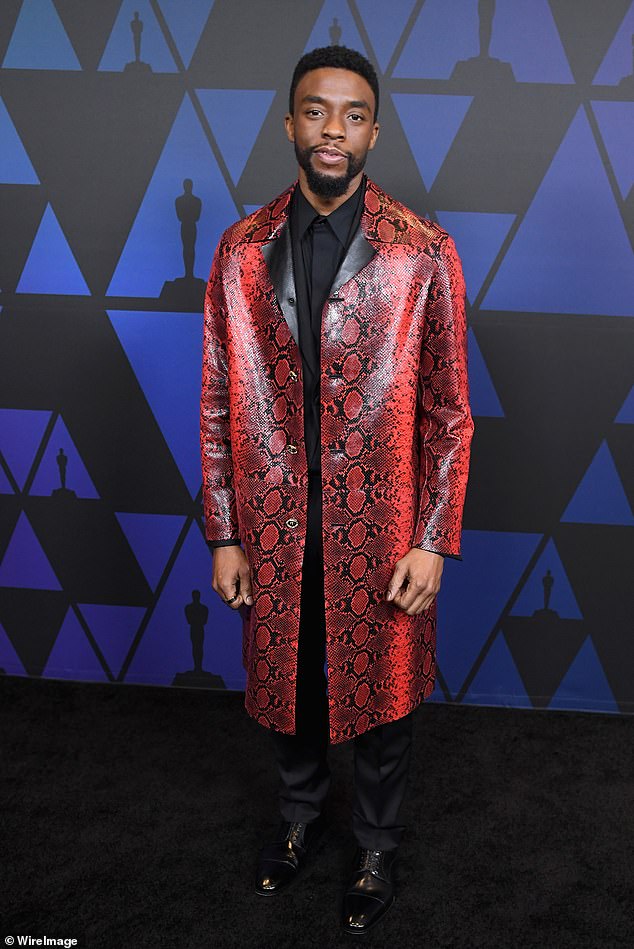 A true Marvel: ‘It was the honor of his career to bring King T’Challa to life in Black Panther’ his family tweeted. Chadwick is pictured at the Academy’s 10th annual Governor’s Awards in Hollywood; November 2018 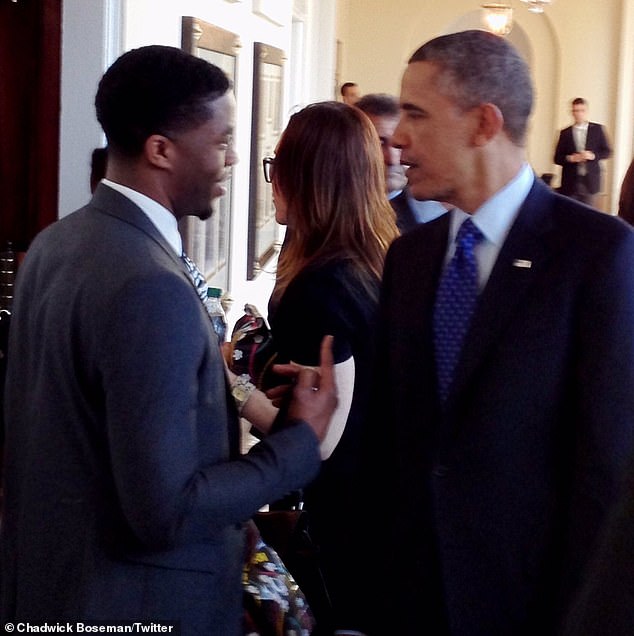 Barack’s blessing: The former US president who met Chadwick in 2013 after he visited the White House to work with kids tweeted, ‘To be young, gifted, and Black; to use that power to give them heroes to look up to; to do it all while in pain – what a use of his years’

Obama also spoke out about Chadwick on Saturday, after Boseman had come to the White House in 2013 to work with kids during the time he was playing Jackie Robinson in the movie 42.

‘Chadwick came to the White House to work with kids when he was playing Jackie Robinson. You could tell right away that he was blessed. To be young, gifted, and Black; to use that power to give them heroes to look up to; to do it all while in pain – what a use of his years,’ Obama tweeted.

Boseman made history playing the very first Black superhero in any Marvel Comic film. His role as King T’Challah in Black Panther, propelled the film to be the first superhero film nominated for Best Picture at the Academy Awards as it received a slew of nominations in 2018.

More details of Chadwick’s private life have started to surface after news of his passing hit the Internet. 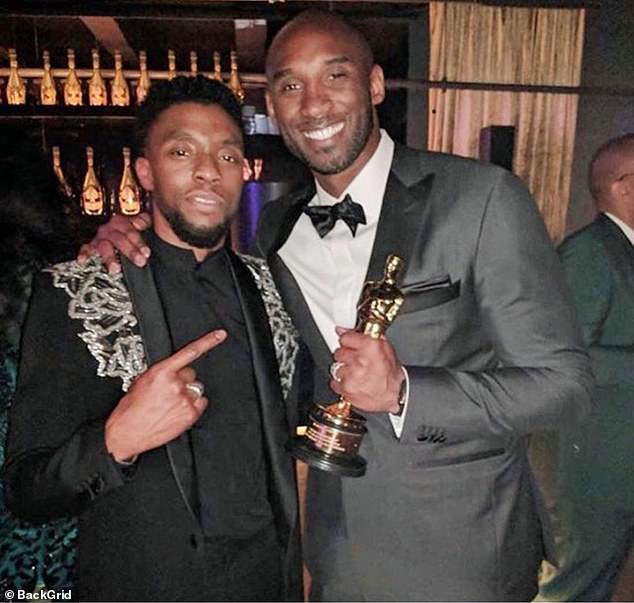 Two kings: Chadwick Boseman and Kobe Bryant pose together at the 2018 Oscars in Los Angeles 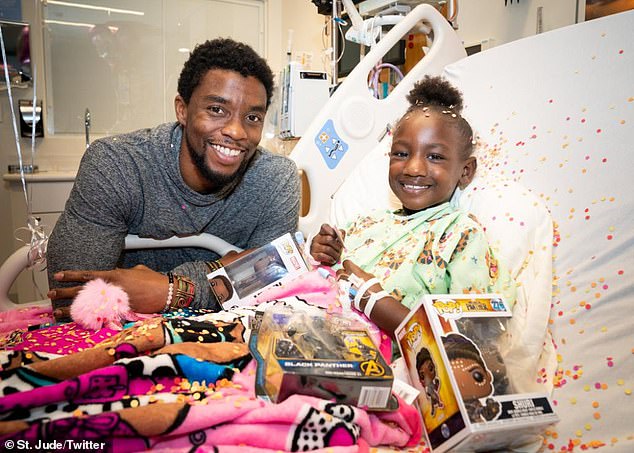 Ray of light: Chadwick spent a lot of time visiting terminally ill children at St. Jude’s Hospital in Los Angeles during 2018 while he was silently suffering with the same illness 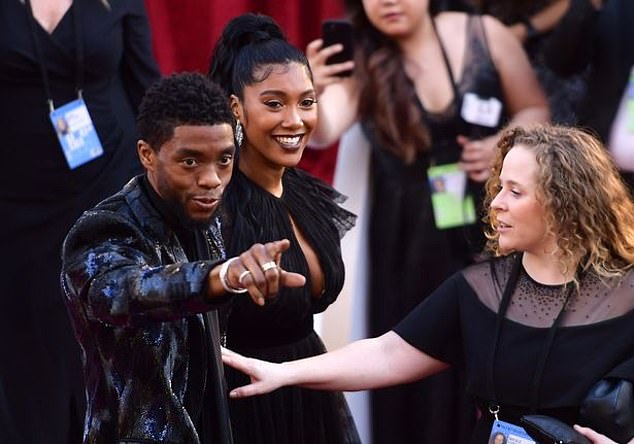 Longtime love: Right before his death, Chadwick Boseman secretly married his longtime love Taylor Simone Ledward who he had been linked to since 2015. She was at his side during his time of passing

During Chadwick’s own private battle with cancer, the actor frequently visited terminally ill children at St. Jude’s Hospital in Los Angeles, even breaking down in tears after two boys he visited passed before the release of Black Panther which they had been eagerly awaiting.

It has also been revealed that before his death Boseman secretly married his longtime love Taylor Simone Ledward who he had been linked to since 2015. The jazz singer was by his side with the rest of his family at his time of passing.

The Hollywood A-lister got his first TV acting role in 2003 on an episode of The Third Watch, before landing his breakout film role as Jackie Robinson in 42 in 2013. 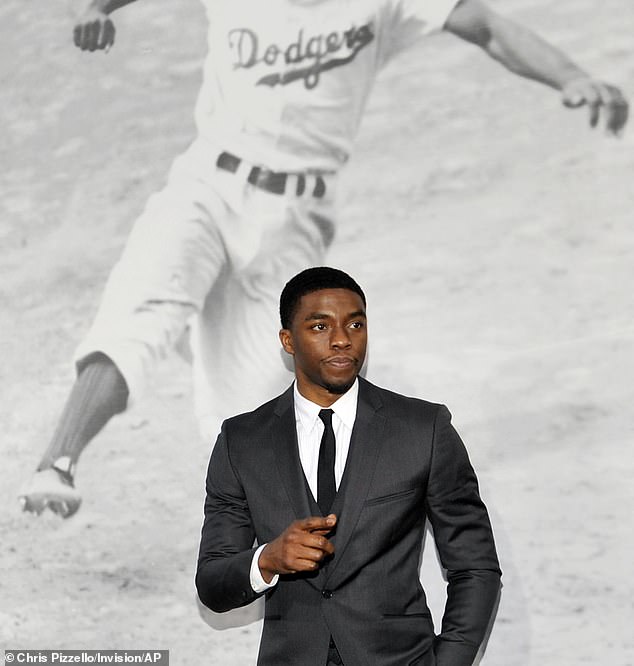 42: Chadwick poses at the premiere for 42 in Los Angeles. The actor got high praise for his role as Jackie Robinson, the first Black Major League baseball player; April 2013